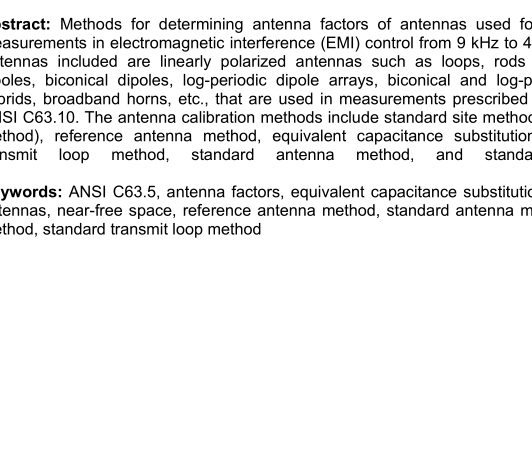 IEEE C63.5-2017 pdf free download.American National Standard for Electromagnetic Compatibility— Radiated Emission Measurements in Electromagnetic Interference (EMI) Control—Calibration and Qualification of Antennas (9 kHz to 40 GHz).
In 1951, ASA Sectional Committee C63, through its Subcommittee No. 1 on Techniques and Developments, started work on improving and extending measurement methods mentioned in a 1940 report produced by the Edison Electric Institute-National Electrical Manufacturers Association-Radio Manufacturers Association (EEI-NEMA-RMA) Joint Co-ordination Committee on Radio Reception, and those in military specifications at the time. 1 In the course of this work, Subcommittee No. 1 developed American Standard ASA C63.4-1963, American Standard Methods of Measurement of Radio-Noise Voltage and Radio-Noise Field Strength, 0.015 to 25 Megacycles/Second, Low-Voltage Electric Equipment, and Nonelectric Equipment. ASA C63.4-1963 was reaffirmed in 1969, and was revised and improved with a new version released in 1981. Subcommittee 1 continued to improve the ASA C63.4 standard and concentrated on improving the reproducibility of measuring radiated emissions from one test site to another test site. Evidence showed that the variability was due, in part, to inadequate: a) control of site ground plane conductivity, flatness, site enclosures, effects of surrounding objects, and certain other site construction features; b) accounting for antenna factors (AFs), associated cabling, and balun and equipment under test (EUT) characteristics; and c) consideration of mutual coupling effects between the EUT and the receiving antennas and their images in the ground plane. Accordingly, ANSI C63.4 was republished in 1988. Also, ANSI C63.5, ANSI C63.6, and ANSI C63.7 were all published in 1988 to provide additional information. Thus, the first edition of ANSI C63.5 was published in 1988, American National Standard for Calibration of Antennas Used for Radiated Emission Measurements in Electromagnetic Interference (EMI) Control.
3.1 Definitions ambient level: The magnitude of radiated and conducted signals and noise existing at a specific test location in the absence of signals from a test sample. antenna: Transducer that converts the guided electromagnetic energy of the feed line into a radiated wave in space and vice versa. (CISPR 16-1-6:2014) NOTE 1— See CISPR 16-1-6:2014 [B10]. 13 NOTE 2— In this document, for antennas for which a balun is intrinsic to the functioning of the antenna, the term antenna includes the balun. antenna calibration site (ACS): A site used to calibrate antennas. The site requirements are divided into two frequency ranges, i.e., 30 MHz to 1000 MHz and 1 GHz to 40 GHz. NOTE—The test site shall meet the requirements listed in Annex J for the frequency range of interest. antenna factor (AF): Ratio of the electric field strength (E) in the polarization direction of the antenna to the voltage (V o ) induced across the load connected to the antenna and expressed in decibel form [20 log (E/V o )]. The AF has units of dB(1/m) in logarithmic units and 1/m in linear units. See also: free-space antenna factor; near-free-space antenna factor. balun: A device for transforming an unbalanced voltage to a balanced voltage or vice versa. (ANSI C63.14) biconical dipole antenna: symmetric antenna formed by two conical radiating elements having a common axis, and adjacent vertices at which they are fed. (CISPR 16-1-6:2014, MOD) Syn: biconical antenna. NOTE—See CISPR 16-1-6:2014 [B10]. broadband antenna: An antenna that has a relatively constant gain, and that functions satisfactorily, over a wide range of frequencies (bandwidth of 2:1 or larger), for example a log-periodic dipole array antenna or a double-ridged waveguide horn antenna. (ANSI C63.14-2014, 4.51 MOD) calculable antenna: Antenna for which the antenna factor (AF) of a single antenna, and the relative insertion loss between a pair of antennas, can be calculated using either analytical or numerical