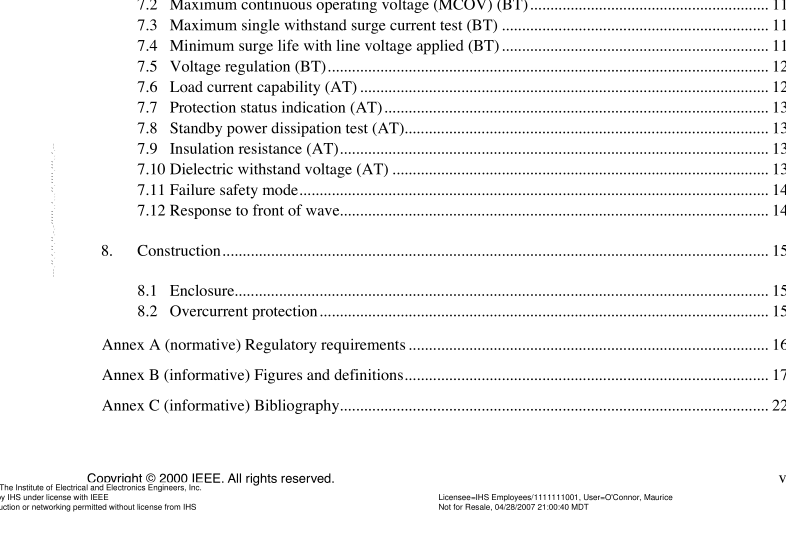 IEEE C62.62-2000 pdf free download.IEEE Standard Test Specifications for Surge-Protective Devices for Low-Voltage AC Power Circuits.
IEEE Std C62.1-1989 (Reaff 1994), IEEE Standard for Gapped Silicon-Carbide Surge Arresters for AC Power Circuits. 3 IEEE Std C62.2-1989 (Reaff 1994), IEEE Guide for Application of Gapped Silicon-Carbide Surge Arresters for Alternating Current Systems. IEEE Std C62.11-1999, IEEE Standard for Metal-Oxide Surge Arresters for Alternating Current Power Circuits (>1 kV). IEEE Std C62.31-1987 (Reaff 1998), IEEE Standard Test Specifications for Gas Tube Surge-Protective Devices. IEEE Std C62.33-1982 (Reaff 1994), IEEE Standard Test Specifications for Varistor Surge-Protective Devices. IEEE Std C62.35-1987 (Reaff 1993), IEEE Standard Test Specifications for Avalanche Junction Semicon- ductor Surge-Protective Devices. IEEE Std C62.41-1991 (Reaff 1995), IEEE Recommended Practice on Surge Voltages in Low-Voltage AC Power Circuits. IEEE Std C62.42-1992 (Reaff 1999), IEEE Guide for the Application of Gas Tube and Air Gap Arrester Low-Voltage (Equal to or Less than 100 Vrms or 1200 Vdc) Surge-Protective Devices. IEEE Std C62.45-1992 (Reaff 1998), IEEE Guide on Surge Testing for Equipment Connected to Low- Voltage AC Power Circuits. IEEE Std 4-1995, IEEE Standard Techniques for High-Voltage Testing. NFPA 70-1999, The National Electrical Code ® (NEC ® ). 4 UL 1449-1996, Standard for Transient Voltage Surge Suppressors, Second Edition. 5 3. Definitions The following definitions apply specifically to surge-protective devices and do not necessarily cover other applications..
3.2 clamping voltage: The peak voltage across the surge-protective device measured under conditions of a specified surge current and specified current waveform. 3.3 combination surge: See: combination wave. 3.4 combination wave: A surge delivered by an instrument that has the inherent capability of applying a 1.2/50-voltage wave across an open-circuit, and delivering an 8/20-current wave into a short circuit. The instantaneous impedance to which the combination wave is applied determines the exact wave that is deliv- ered. The peak magnitudes of the voltage or current wave shall be specified. Syn: combination surge. 3.5 crest (peak) value: The maximum absolute value that a wave, surge, or impulse attains. 3.6 design tests: Tests made by the manufacturer on each design to establish the performance characteristics and to demonstrate compliance with the appropriate standards of the industry. Once made, they need not be repeated unless the design is changed (so as to modify performance). 3.7 dielectric withstand voltages: The maximum voltage that may be applied between line or phase termi- nals and the neutral or ground terminals (or the device enclosure) without causing electrical failure or breakdown of the device insulation. 3.8 discharge current: The surge current that flows through the surge-protective device when conduction occurs. 3.9 discharge current withstand rating: The specified magnitude and wave shape of a discharge current that can be applied to a surge-protective device a specified number of times without causing damage or deg- radation beyond specified limits. 3.10 discharge voltage: The voltage that appears across other terminals of a surge-protective device during passage of discharge current. 3.11 discharge voltage-current characteristic: The variation of the crest values of discharge voltage with respect to discharge current.
3.20 impulse withstand voltage: The crest value of an impulse that, under specified conditions, can be applied without causing a disruptive discharge. 3.21 indoor surge-protective device: A surge-protective device that, because of its construction, shall be protected from the weather. 3.22 insulation resistance: The resistance, measured at a specified dc voltage, between any specified exposed conductive surface or line terminal (including ground) and one or more of the other line terminals of the device. 3.23 leakage current: The current flowing in the equipment-grounding conductor (including a conductive case) when the device is connected as intended to the energized power system at rated voltage. 3.24 lightning: An electric discharge that occurs in the atmosphere between clouds or between clouds and ground. 3.25 maximum continuous operating voltage (MCOV): The maximum designated root-mean-square value of power frequency voltage that may be applied continuously between the terminals of the overvoltage protective device. 3.26 maximum (highest) system voltage: The highest voltage at which a system is operated. 3.27 multi-terminal surge-protective device: A protective device that has three or more terminals, usually containing both series and parallel elements between the terminals. 3.28 nominal rate of rise (of an impulse wavefront): The slope of the line that determines the virtual zero. It is usually expressed in volts or amperes per microsecond. 3.29 nominal system voltage: A nominal value assigned to designate a system of a given voltage class. 3.30 operating duty cycle: One or more unit operations, as specified. 3.31 oscillatory surge: A surge that includes both positive and negative polarity values. 3.32 outdoor surge-protective device: A surge-protective device that is designed for outdoor use. 3.33 performance characteristics: The parameters that are essential to describe the behavior or applicability of the device under specified conditions of operation.