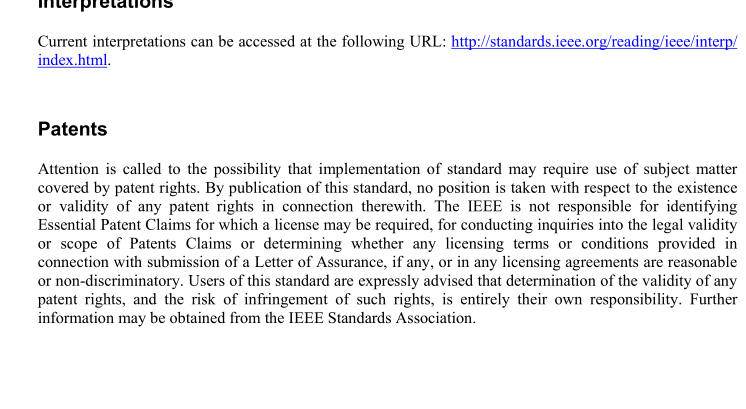 IEEE C37.239-2010 pdf free download.IEEE Standard for Common Format for Event Data Exchange (COMFEDE) for Power Systems.
2. Normative references The following referenced documents and URLs are indispensable for the application of this document (i.e., they must be understood and used, so each referenced document is cited in text and its relationship to this document is explained). For dated references, only the edition cited applies. For undated references, the latest edition of the referenced document (including any amendments or corrigenda) applies. World Wide Web Consortium, W3C Recommendation, XML Schema Part 1: Structures, 2d ed., 2004. 1,2 World Wide Web Consortium, W3C Recommendation, XML Schema Part 2: Datatypes, 2d ed., 2004. 3 World Wide Web Consortium, W3C Recommendation, Namespaces in XML 1.1, 2004. 4 3. Definitions, acronyms, and abbreviations For the purposes of this document, the following terms and definitions apply. The IEEE Standards Dictionary: Glossary of Terms & Definitions should be consulted for terms not defined in this clause. 5 3.1 Definitions breaker operate time: The time from energization of the trip coil until the current in the phases is interrupted. event: An event is defined as either a change of state of a binary data value, exceeding or resetting of a measured threshold, or meeting or resetting a rate of change threshold. EntryData: Basic information associated with an event: Data Reference, Value, Timestamp, Quality, and Reason Code. eXtensible Markup Language (XML) name space: A mechanism used to avoid clashes between names from different markup vocabularies. fault clearing time: The time from the fault inception until all currents are interrupted in the faulted phases. fault summary reports: The type of recording containing a sequence of event history and extra information associated with each event. fault trigger: Signals or internal logic that triggers an event. instance file: File containing information that conforms to a specific format.
International Electrotechnical Commission (IEC) 61850 Log: Periodic recordings, such as metering, or a sequence of event data, that conform to IEC 61850-7-2 Log standards. PayloadData: Extra information associated with an event. For example, for an event recorded during a fault, payload data may include information such as distance to fault, fault currents, fault voltages, and so on. primary values: The magnitude of a particular quantity, expressed as a number multiplied by a unit of measurement whose value corresponds to the unit used on the primary side of a power system. receiver: An agent that is a recipient of the data to be processed. sender: An agent that supplies the data for the intent of conveying information. sequence of events (SOE) report: A recording of sequence of events (SOE) data. trigger options (TrgOpt): The source of a trigger. Options include Data Change, Data Update, General Interrogation, and Integrity (periodic) update. Unified Modeling Language (UML) class diagram: A visual expression of various static relations of class-related elements. Class Diagram can contain not only classes but also interfaces, enumerations, packages, various relations, instances, and their links.
5.5.3 Versioning strategy This subclause describes a processing model needed for handling new versions of COMFEDE in receivers. It also specifies rules to be used by the creators of future versions. The Must Ignore Rules and MustUnderstand Constructs defined hereinafter should be used to allow receivers to read different versions of COMFEDE instance files with the same name space. The Must Ignore All Rule is a substitution model that enables forwards-compatible changes by ignoring content that is not understood (World Wide Web Consortium [B8]). For COMFEDE, this means that the receiver is expected to ignore elements that are not understood and all their content as well. For attributes, only the attribute not understood is ignored. For cases where a new version contains data that shall be understood by the receiver, the MustUnderstand Construct shall be used. This means that new declared elements shall contain the mustUnderstand attribute with a value equal to true. Receivers then know they cannot ignore the new element and related applications shall abort the processing of the instance file. 5.6 Main structure of the schema This subclause specifies the syntax definition of COMFEDE using UML class diagrams, text, and excerpts from the XML schema files. NOTE—Some optional element attributes in the schema have a default value, which means that in the absence of the attribute, a receiver will use this value if needed. To avoid dealing with unnecessarily large files, it is recommended that those attributes be not included in an instance file if default values are used. This recommendation is in accordance with rule c) in 5.5.1.