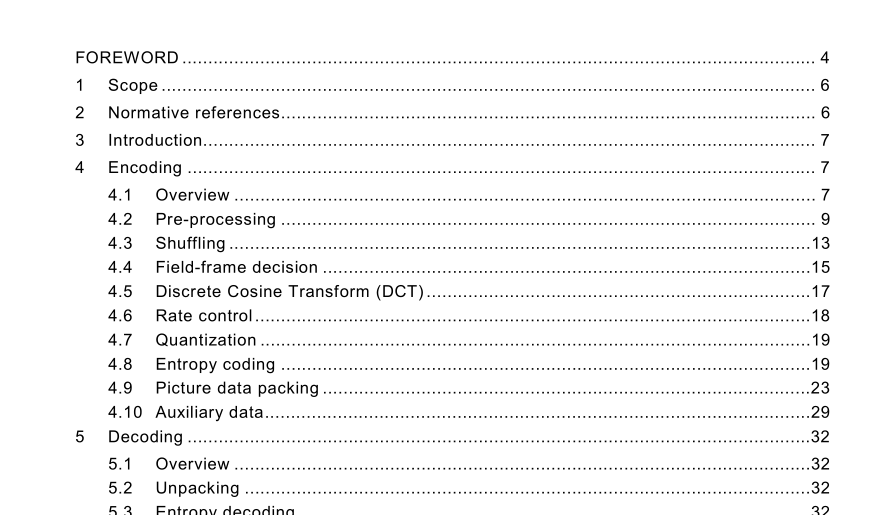 IEC 62356-2-2003 pdf – Video recording – 12,65 mm type D-11 format – Part 2: Picture compression and data stream.
1 Scope This International Standard specifies the compression of a high-definition source format to a dual-channel packetized data stream format which is suitable for recording on disc and tape storage devices including the Type D-11 tape recorder. The specification includes a number of basic packetizing operations including the shuffling of the source data prior to compression, both to aid compression performance and to allow error concealment processing in the decoder. The standard also includes the processes required to decode the compressed Type D-11 packetized data format into a high-definition output signal. This standard supports high-definition source formats using 1 920 × 1 080 pixels and the sampling structures as specified in SMPTE 274M and RP 211 at the following picture rates: • 24/1,001/PsF; • 24/PsF; • 25/PsF; • 30/1,001/PsF; • 50/I; • 60/1,001/I where ‘PsF’ indicates Progressive segmented Frame and ‘I’ indicates Interlaced. The data packet format specified by this standard is used as the source data stream for the associated document which maps this Type D-11 packetized data-stream format together with AES3 data over SDTI. 2 Normative references The following referenced documents are indispensable for the application of this document. For dated references, only the edition cited applies. For undated references, the latest edition of the referenced document (including any amendments) applies. SMPTE 292M:1998, Television – Bit-Serial Digital Interface for High-Definition Television Systems SMPTE 274M:1998, Television – 1920 × 1080 Scanning and Analog and Parallel Digital Interfaces for Multiple Picture Rates SMPTE RP 211:2000, Implementation of 24P, 25P and 30P Segmented Frames for 1920 × 1080 Production Format
In common with other compression systems, the Type D-11 encoding process uses intra- frame coding (i.e. the coding is bound by the frame period) using the Discrete Cosine Transform (DCT) to provide the data de-correlation required for efficient compression. The coefficients are quantized and variable length coded (VLC) to produce the basic output data format. The source pictures are subsampled prior to compression coding. This reduces the number of coded pixels and allows the number of bits-per-pixel value to be raised in proportion. The luminance source sampling grid of 1 920 × 1 080 pixels is reduced to 1 440 × 1 080 pixels. For each chrominance channel, the source sampling grid of 960 × 1 080 pixels is reduced to 480 × 1 080 pixels. In the decoder, the output pixel sample grid is restored back to the source format of 1 920 × 1 080 pixels by interpolation following the compression decoding process. The compressed data format specified by the output of the compression encoder is of a form which allows direct mapping into the basic block structure as defined in the Type D-11 digital recorder document. 4 Encoding 4.1 Overview Type D-11 source data for compression shall comprise only the production aperture area as defined by SMPTE 274M. NOTE DCT coding uses a data block size which allows exactly 1 080 lines to be coded. The source formats comprise luminance (Y) and chrominance (C B , C R ) component signals as defined by SMPTE 274M and SMPTE RP 211. Type D-11 source picture rates for compression shall be constrained to the following values: • 24/1 001 frames per second in the segmented format as defined by SMPTE RP 211; • 24 frames per second in the segmented format as defined by SMPTE RP 211; • 25 frames per second in the segmented format as defined by SMPTE RP 211; • 30/1 001 frames per second in the segmented format as defined by SMPTE RP 211; • 50 fields per second in the interlaced format (a.k.a. 50/I) as defined by SMPTE 274M;
The active picture data for compression shall be pre-filtered and then subsampled from a source representation to a subsampled representation. The reduced active data shall then be split into two identical channels for processing as shown in Figure 1 and Table 2. The total picture data in each channel shall be divided into 20 250 8*8 blocks, each formed from eight samples of eight consecutive lines in a frame. The 8*8 blocks for each channel shall then be shuffled within the frame boundary to produce 270 code blocks each comprising 45 luminance (Y) 8*8 blocks and 30 chrominance 8*8 blocks (15C B and 15 C R ). The picture data in each code block shall be compressed by the application of the DCT, quantization and VLC encoding. Each code block shall be separately encoded, and there shall be no data-sharing between code blocks. The data from the compression output shall be packed into the code block space of 1 080 bytes. Each code block shall be segmented into five basic blocks each comprising 216 compressed data bytes. Each basic block nominally contains the compressed data for nine luminance 8*8 blocks and six chrominance 8*8 blocks (3 C B and 3 C R ). Data overflow from one basic block can be shared with other basic blocks in the same code block. NOTE The 8*8 blocks may be coded by a single 8*8 DCT block, by two 8*4 DCT blocks or by two 4*8 DCT blocks depending on the mode of operation (see 4.4).