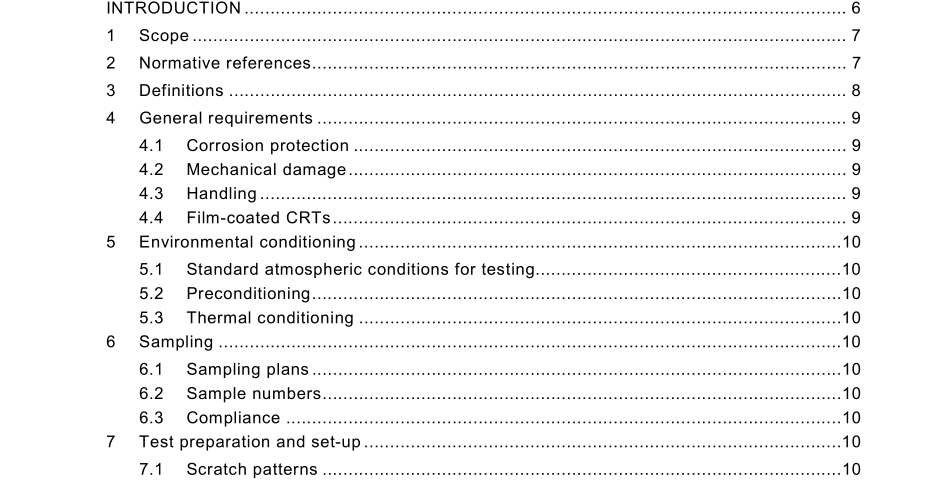 IEC 61965-2003 pdf – Mechanical safety of cathode ray tubes.
1 Scope This International Standard is applicable to cathode ray tubes and cathode ray tube assemblies (hereinafter referred to as CRTs) which are intended for use as components in apparatus and which have integral protection with respect to the effects of implosion. These requirements apply to CRTs intended for use in apparatus including electrical and electronic measuring and testing equipment, information technology equipment, medical equipment, telephone equipment, television equipment and other similar electronic apparatus. This standard is intended to apply only to those CRTs in which the face of the CRT forms part of the enclosure for the apparatus. The test methods do not apply to CRTs which are protected by separate safety screens. A CRT covered by this standard is intended to be installed in an enclosure designed both to protect the rear of the CRT against mechanical or other damage under normal conditions of operation and to protect the user against particles expelled in a backwards direction from the CRT face in the event of implosion. This standard contains requirements for CRTs of 76 mm diagonal and larger that incorporate implosion protection systems providing protection against the hazards of particles expelled forwards beyond the face. There is no intended protection against particles expelled in other directions. Compliance is tested by subjecting CRTs to the test procedures and criteria, which are given in Clauses 8 (large CRTs), 9 (small CRTs) and 10 (CRTs with protective film) of this standard. The definitions of large and small CRTs are given in Clause 3. NOTE This set of requirements replaces the current requirements for the mechanical safety of cathode ray tubes (CRTs) as described in IEC 60065 (Clause 18), which will be modified accordingly.
2 Normative references The following referenced documents are indispensable for the application of this document. For dated references, only the edition cited applies. For undated references, the latest edition of the referenced document (including any amendments) applies. IEC 60065:2001, Audio, video and similar electronic apparatus – Safety requirements IEC 60068-1:1988, Environmental testing – Part 1: General and guidance Amendment 1 (1992) IEC 60216-1:2001, Electrical insulating materials – Properties of thermal endurance – Part 1: Ageing procedures and evaluation of test results ISO 527-1:1993, Plastics – Determination of tensile properties – Part 1: General principles ISO 527-3:1995, Plastics – Determination of tensile properties – Part 3: Test conditions for films and sheets ISO 8510-1:1990, Adhesives – Peel test for a flexible-bonded-to-rigid test specimen assembly – Part 1: 90 degree peel
3 Definitions For the purposes of this document the following definitions apply. 3.1 bonded frame system employing a preformed metal frame that covers the periphery of the CRT rim area. The space or void between the CRT rim and the metal frame is filled with resin or equivalent 3.2 CRT diagonal nominal diagonal of the glass envelope at its maximum dimension (for example, mould-match line) excluding any hardware 3.3 CRT envelope structure consisting of a face or faceplate, funnel and neck assembly 3.4 devacuation equalization of the pressure in a CRT relative to the ambient pressure 3.5 fracture one or more cracks in the faceplate or funnel causing a rapid or slow devacuation of the CRT envelope 3.6 glass particle piece of glass that exceeds 0,025 g in weight 3.7 implosion devacuation due to the rapid and sudden inward collapse of a CRT envelope, usually accompanied by a loud report 3.8 laminated CRT system that provides a separate external safety panel bonded to the face of the CRT 3.9 prestressed banded CRT system that employs a metal tension band (located over the CRT rim area) that is tightened by thermal shrinking, or other means, to a tensile load. The system may also include a metal rim band located between the tension band and the CRT rim. The tension band or the rim band or both may have an interlayer of tape, resin or the equivalent placed between the mating parts