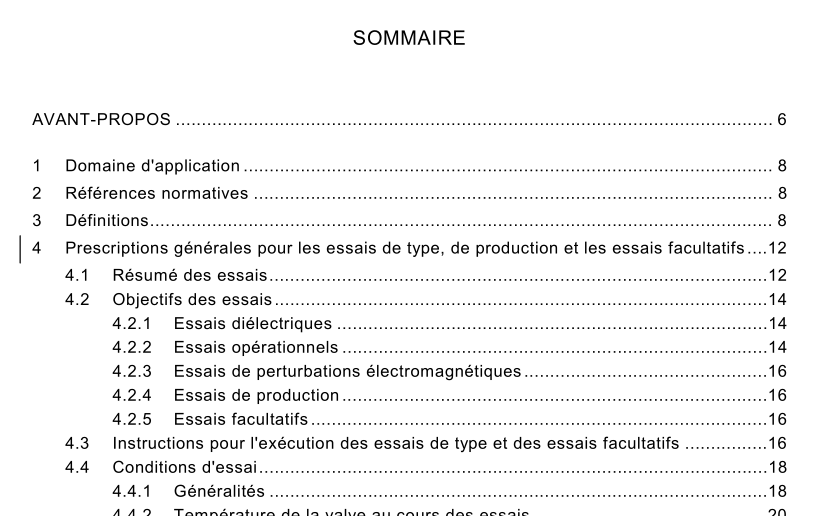 IEC-61954-2003 pdf – Power electronics for electrical transmission and distribution systems – Testing of thyristor valves for static VAR compensators.
1 Scope This International Standard defines type, production and optional tests on thyristor valves used in thyristor controlled reactors (TCR), thyristor switched reactors (TSR) and thyristor switched capacitors (TSC) forming part of static VAR compensators (SVC) for power system applications. The requirements of the standard apply both to single valve units (one phase) and to multiple valve units (several phases). Clauses 4 to 7 detail the type tests, i.e. tests which are carried out to verify that the valve design meets the requirements specified. Clause 8 covers the production tests, i.e. tests which are carried out to verify proper manufacturing. Clauses 9 and 10 detail optional tests, i.e. tests additional to the type and production tests. 2 Normative references The following referenced documents are indispensable for the application of this document. For dated references, only the edition cited applies. For undated references, the latest edition of the referenced document (including any amendments) applies. IEC 60060 (all parts), High-voltage test techniques IEC 60060-1, High-voltage test techniques – Part 1: General definitions and test requirements IEC 60060-2, High-voltage test techniques – Part 2: Measuring systems IEC 60071 (all parts), Insulation co-ordination IEC 60071-1:1993, Insulation co-ordination – Part 1: Definitions, principles and rules IEC 60270, Partial discharge measurements IEC 60700-1:1998, Thyristor valves for high-voltage direct current (HVDC) power transmission – Part 1: Electrical testing 3 Definitions For the purpose of this International Standard, the following definitions apply: 3.1 thyristor level part of a thyristor valve comprising a thyristor, or thyristors connected in parallel or anti- parallel, together with their immediate auxiliaries and reactor, if any
3.2 thyristor (series) string series connected thyristors forming one direction of a thyristor valve 3.3 valve reactor reactor incorporated within some valves for limitation of stresses. For testing purposes it is considered an integral part of the valve 3.4 valve section electrical assembly, comprising a number of thyristors and other components, which exhibits pro-rated electrical properties of a complete thyristor valve but only a portion of the full voltage blocking capability of the thyristor valve, and that can be used for tests 3.5 thyristor valve electrically and mechanically combined assembly of thyristor levels, complete with all connections, auxiliary components and mechanical structures, which can be connected in series with each phase of the reactor or capacitor of a SVC 3.6 valve structure physical structure which insulates the valves to the appropriate level above earth potential and from each other 3.7 valve base electronics (VBE) electronic unit, at earth potential, which is the interface between the control system of the SVC and the thyristor valves 3.8 multiple valve unit (MVU) assembly of several valves in the same physical structure which cannot be separated for test purposes (e.g. three-phase valves) 3.9 redundant thyristor levels the maximum number of thyristor levels in the thyristor valve that may be short-circuited, externally or internally, during service without affecting the safe operation of the thyristor valve as demonstrated by type tests; and which if and when exceeded, would require either the shutdown of the thyristor valve to replace the failed thyristors, or the acceptance of increased risk of failures 3.10 voltage breakover (VBO) protection means of protecting the thyristors from excessive voltage by firing them at a predetermined voltage
4.2 Objectives of tests The tests described apply to the valve (or valve sections), the valve structure and those parts of the coolant distribution system and firing and monitoring circuits which are contained within the valve structure or connected between the valve structure and earth. Other equipment, such as valve control and protection and valve base electronics may be essential for demonstrating the correct function of the valve during the tests but are not in themselves the subject of the tests. 4.2.1 Dielectric tests Tests for the following dielectric stresses are specified: – a.c. voltage; – combined a.c. and d.c. voltage (TSC only); – impulse voltages. In the interest of standardization with other equipment, lightning impulse tests between valve terminals and earth and between phases of an MVU are included. For tests between valve terminals, the only impulse test specified is a switching impulse.