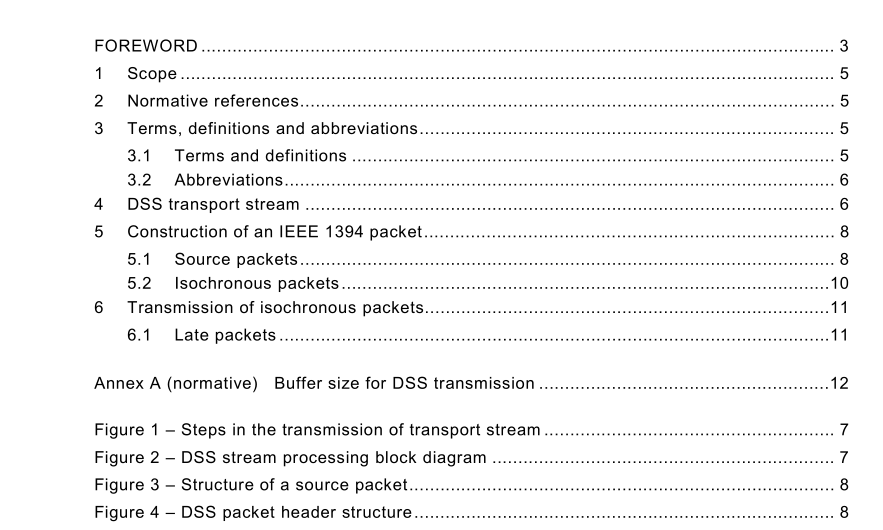 IEC 61883-7-2003 pdf – Consumer audio/video equipment – Digital interface – Part 7: Transmission of ITU-R BO.1294 System B.
1 Scope This specification defines packetization and transmission for transport streams of ITU-R BO.1294 system B (DirecTV system/DSS) over the IEEE 1394 Serial Bus. 2 Normative references The following referenced documents are indispensable for the application of this document. For dated references, only the edition cited applies. For undated references, the latest edition of the referenced document (including any amendments) applies. IEC 61883-1, Consumer audio/video equipment – Digital interface – Part 1: General ITU-R BO.1294:1997, Common functional requirements for the reception of digital multi- programme television emissions by satellites operating in the 11/12 GHz frequency range 1 IEEE 1394:1995, Standard for a High Performance Serial Bus IEEE 1394a:2000, Standard for a High Performance Serial Bus – Amendment 1 3 Terms, definitions and abbreviations For the purposes of this part of IEC 61883, the following terms and definitions apply. 3.1 Terms and definitions For the purposes of this part of IEC 61883, the following terms and definitions apply. 3.1.1 byte eight bits of data, used as a synonym for octet NOTE The symbol for byte is B. 3.1.2 CSR architecture convenient abbreviation of the following reference: ISO/IEC 13213:1994, Information technology – Microprocessor systems – Control and status register (CSR) architecture for microcomputer buses 3.1.3 quadlet four bytes of data
3.2 Abbreviations For the purpose of this part of IEC 61883, the following abbreviations used in IEEE 1394 apply: AV/C Audio Video Control CIP Common Isochronous Packet CTR Cycle Time Register HD High Definition IEEE The Institute of Electrical and Electronics Engineers, Inc. MPEG Motion Picture Expert Group TSP Transport Stream Package 4 DSS transport stream A DSS transport stream consists of transport stream packets with a length of 130 B. NOTE Refer to Annex 1 of ITU-R BO.1294: 1997 for more information. A stream may contain several programs. In Figure 1, an example is given of a transport stream, which consists of several programs. Often, only one or a few programs need to be transmitted. If a program selection is carried out, then only those transport stream packets from that particular transport stream are transmitted. In this situation, the occupied bandwidth on the IEEE 1394 interface can be reduced. Reduction of the bit rate is carried in a smoothing buffer. As a result of the smoothing operation, the transport stream packets will be shifted in time. The transport stream packets at the output of the smoothing buffer are transmitted over the IEEE 1394 interface. During transmission, this interface will introduce some jitter on the arrival time of the transport stream packets in the receiver. In the DSS transport stream, there are strong requirements on the timing of the transport stream packets. The jitter introduced by the both the smoothing buffer and the transmitter of the interface has to be compensated. This is done by adding a time stamp to the transport stream packets: – at the moment it arrives at the input of the smoothing buffer; or – at the input of the digital interface, if smoothing is not applied. The receiver of the interface contains a receiver buffer, which compensates for the introduced jitter.
The system clock count is used by bit stream recorders, like D-VHS, to lock its system clock phase to the source stream without needing to look into the DSS transport stream packet for clock information. If a stream contains video and/or audio application packets, then the stream shall contain packets with a valid system clock count. The maximum interval between valid system clock counts (or “ticks”) shall be 200 ms. Therefore many audio and video packets in between may not contain a valid system clock count. If a stream does not contain video or audio application packets, then the system clock count is not required. 5.1.3 Source packet header Figure 5 shows the structure of the source packet header.