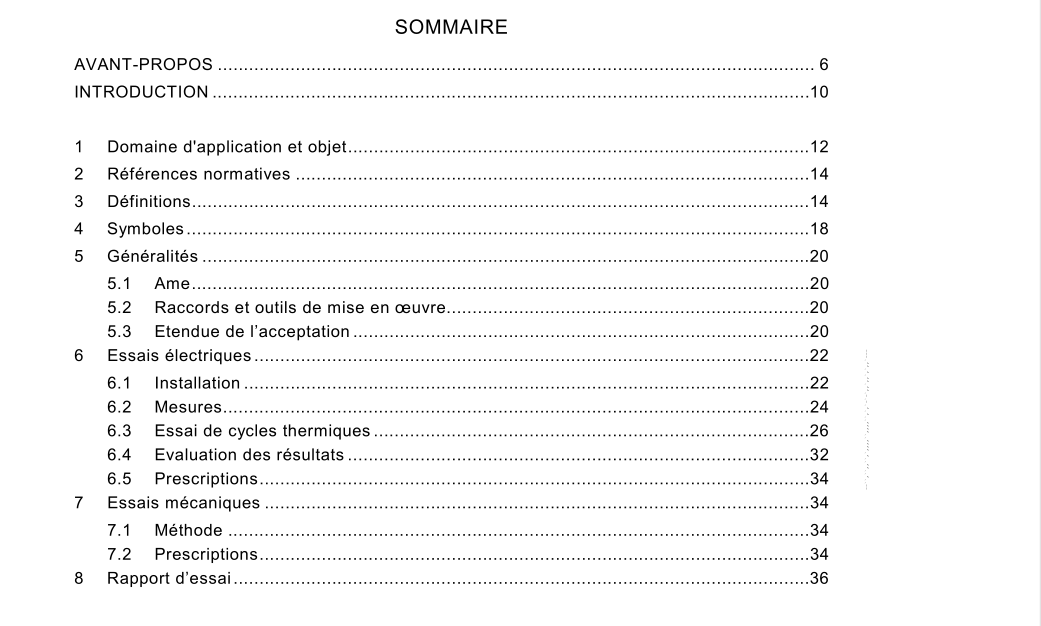 IEC 61238-1-2003 pdf – Compression and mechanical connectors for power cables for rated voltages up to 30 kV (U m = 36 kV) – Part 1: Test methods and requirements.
1 Scope and object This part of IEC 61238 applies to compression and mechanical connectors for power cables for rated voltages up to 30 kV (U m = 36 kV), e.g. buried cables or cables installed in buildings, having a) conductors complying with IEC 60228 and IEC 60228A with cross-sectional areas 10 mm 2 and greater for copper and 16 mm 2 and greater for aluminium, b) a maximum continuous conductor temperature not exceeding 90 °C. This standard is not applicable to connectors for overhead conductors, which are designed for special mechanical requirements, or to separable connectors with a sliding contact or multi- core connectors (i.e. ring connectors). Although it is not possible to define precisely the service conditions for all applications, two broad classes of connectors have been identified. Class A These are connectors intended for electricity distribution or industrial networks in which they can be subjected to short-circuits of relatively high intensity and duration. As a consequence, Class A connectors are suitable for the majority of applications. Class B These are connectors for networks in which overloads or short-circuits are rapidly cleared by the installed protective devices, e.g. fast-acting fuses. Depending on the application, the connectors are subjected to the following tests: Class A: heat cycle and short-circuit tests; Class B: heat cycle tests only. The object of this standard is to define the type test methods and requirements, which apply to compression and mechanical connectors for power cables with copper or aluminium conductors. Formerly, approval for such products has been achieved on the basis of national standards and specifications and/or the demonstration of satisfactory service performance. The publication of this IEC standard does not invalidate existing approvals. However, products approved according to these earlier standards or specifications cannot claim approval to this IEC standard unless specifically tested to it.
After they have been made, these tests need not be repeated unless changes are made in the connector material, design or manufacturing process which might affect the performance characteristics. 2 Normative references The following referenced documents are indispensable for the application of this document. For dated references, only the edition cited applies. For undated references, the latest edition of the referenced document (including any amendments) applies. IEC 60050(461):1984, International Electrotechnical Vocabulary (IEV) – Chapter 461: Electric cables Amendment 1 (1993) IEC 60228:1978, Conductors of insulated cables IEC 60228A:1982, First supplement – Conductors of insulated cables – Guide to the dimen- sional limits of circular conductors IEC 60493-1:1974, Guide for the statistical analysis of ageing test data – Part 1: Methods based on mean values of normally distributed test results 3 Definitions For the purposes of part of IEC 61238, the following definitions apply. Where possible, the definitions used are in accordance with IEC 60050(461). 3.1 connector (of cables) metallic device for connecting a conductor to an equipment terminal or for connecting two or more conductors to each other [IEV 461-17-03, modified] 3.2 through connector metallic device for connecting two consecutive lengths of conductor [IEV 461-17-04]
3.5 palm (of terminal lug) part of a terminal lug used to make the connection to electrical equipment [IEV 461-17-07] 3.6 barrel (of terminal lug, of connector, etc.) part of a device into which the conductor to be connected is introduced [IEV 461-17-06] 3.7 reference conductor length of unjointed bare conductor or conductor with the insulation removed, which is included in the test loop and which enables the reference temperature and reference resistance to be determined 3.8 equalizer arrangement used in the test loop to ensure a point of equipotential in a stranded conductor 3.9 compression jointing method of securing a connector to a conductor by using a special tool to produce permanent deformation of the connector and the conductor 3.10 mechanical jointing method of securing a connector to a conductor, for example by means of a bolt or screw acting on the latter or by alternative methods 3.11 median connector connector which during the first heat cycle records the third highest temperature of the six connectors in the test loop 3.12 insulation piercing connector (IPC) connector in which electrical contact with the conductor is made by metallic protrusions which pierce the insulation of the cable core [IEV 461-11-08] NOTE The abbreviation IPC will be used throughout the standard.