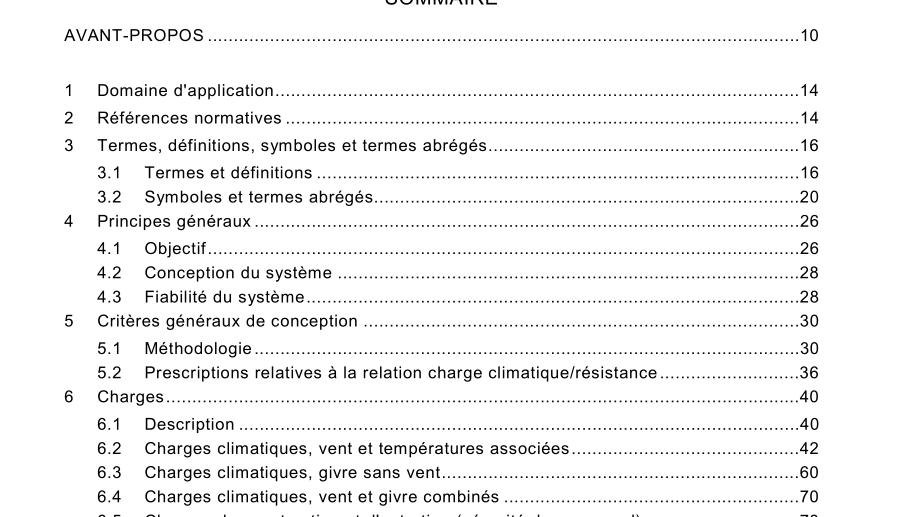 IEC 60826-2003 pdf – Design criteria of overhead transmission lines.
1 Scope This International Standard specifies the loading and strength requirements of overhead lines derived from reliability based design principles. These requirements apply to lines 45 kV and above, but can also be applied to lines with a lower nominal voltage. This standard also provides a framework for the preparation of national standards dealing with overhead transmission lines, using reliability concepts and employing probabilistic or semi- probabilistic methods. These national standards will need to establish the local climatic data for the use and application of this standard, in addition to other data that are country specific. Although the design criteria in this standard apply to new lines, many concepts can be used to address the reliability requirements for refurbishment and uprating of existing lines. This standard does not cover the detailed design of line components such as towers, foundations, conductors or insulators. 2 Normative references The following referenced documents are indispensable for the application of this document. For dated references, only the edition cited applies. For undated references, the latest edition of the referenced document (including any amendments) applies. IEC 60652:2002, Loading tests on overhead line structures IEC 61089:1991, Round wire concentric lay overhead electrical stranded conductors IEC 61773:1996, Overhead lines – Testing of foundations for structures IEC 61774:1997, Overhead lines – Meteorological data for assessing climatic loads IEC 61284:1997, Overhead lines – Requirements and tests for fittings
3 Terms, definitions, symbols and abbreviations For the purposes of this document, the following terms, definitions, symbols and abbreviations apply. 3.1 Terms and definitions 3.1.1 characteristic strength guaranteed strength, minimum strength, minimum failing load R c value guaranteed in appropriate standards NOTE This value usually corresponds to an exclusion limit, from 2 % to 5 %, with 10 % being an upper practical (and conservative) limit. 3.1.2 coefficient of variation COV ratio of the standard deviation to the mean value NOTE The COV of load and strength are respectively denoted by v Q and v R . 3.1.3 components different parts of a transmission line system having a specified purpose NOTE Typical components are towers, foundations, conductors and insulator strings. 3.1.4 damage limit (of a component) serviceability limit state strength limit of a component corresponding to a defined limit of permanent (or inelastic) deformation of this component which leads to damage to the system if it is exceeded NOTE This limit is also called the serviceability limit state in building codes based on limit states design. 3.1.5 damage state (of the system) state where the system needs repairing because one of its components has exceeded its damage limit NOTE The system needs repairing because it is not capable of fulfilling its task under design loads or because design clearances may be reduced (e.g. conductor to ground). 3.1.6 elements different parts of a component NOTE For example, the elements of a steel lattice tower are steel angles, plates and bolts. 3.1.7 exclusion limit e % value of a variable taken from its distribution function and corresponding to a probability of e % of not being exceeded
3.1.8 failure limit (of a component) ultimate limit state strength limit of a component which leads to the failure of the system if this limit is exceeded. NOTE If this strength limit is exceeded, the system will reach a state called “ultimate limit state” as defined in building codes based on limit states design. 3.1.9 failure state (of the system) state of a system in which a major component has failed because one of its components has reached its failure limit (such as by rupture, buckling, overturning) NOTE This state leads to the termination of the ability of the line to transmit power and needs to be repaired. 3.1.10 intact state state in which a system can accomplish its required function and can sustain limit loads 3.1.11 limit loads climatic loads corresponding to a return period, T, used for design purposes without additional load factors NOTE Refer to 5.2.1. 3.1.12 load factor γ factor to be multiplied by limit loads in order to design line components 3.1.13 operating period general measure of useful (or economical) life NOTE Typical operating periods of transmission lines vary from 30 years to 80 years. 3.1.14 reference wind speed V R wind speed at 10 m in height, corresponding to an averaging period of 10 min and having a return period T NOTE When this wind speed is taken in a terrain type B, which is the most common case in the industry, the reference wind speed is identified as V RB . 3.1.15 reliability (structural) probability that a system performs a given task, under a set of operating conditions, during a specified time NOTE Reliability is thus a measure of the success of a system in accomplishing its task. The complement to reliability is the probability of failure or unreliability. 3.1.16 return period (of a climatic event) average occurrence of a climatic event having a defined intensity NOTE The inverse of the return period is the yearly frequency which corresponds to the probability of exceeding this climatic event in a given year.