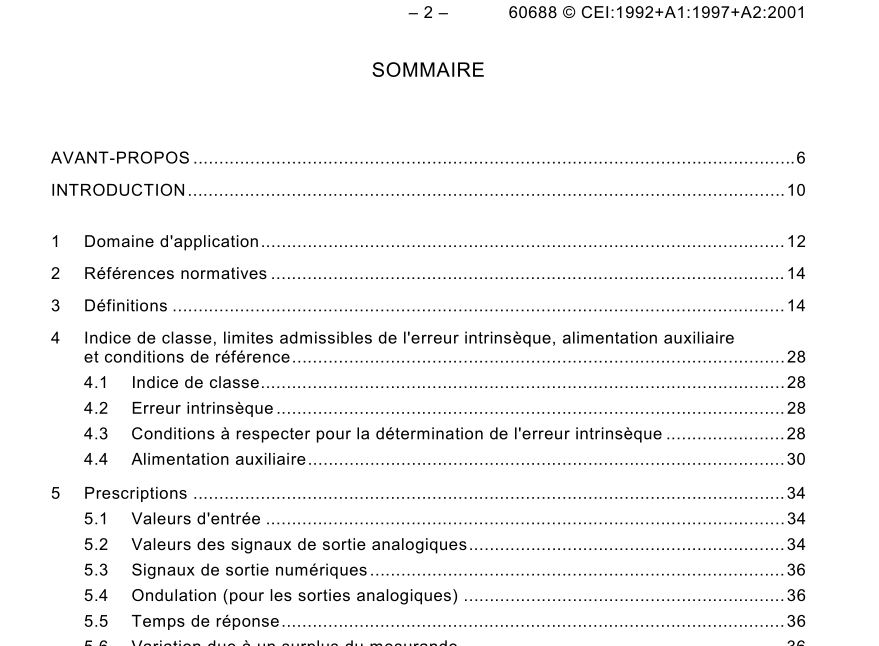 IEC 60688-2002 pdf – Electrical measuring transducers for converting a.c. electrical quantities to analogue or digital signals.
1 Scope This International Standard applies to transducers with electrical inputs and outputs for making measurements of a.c. electrical quantities. The output signal may be in the form of an analogue direct current or in digital form. In this instance, that part of the transducer utilized for communication purposes will need to be compatible with the external system. This standard applies to measuring transducers used for converting alternating electrical quantities such as: – current – voltage – active power – reactive power – power factor – phase angle – frequency to an output signal. Within the measuring range, the output signal is a function of the measurand. An auxiliary supply may be needed. This standard applies: a) if the nominal frequency of the input(s) lies between 5 Hz and 1 500 Hz; b) if a measuring transducer is part of a system for the measurement of a non-electrical quantity, this standard may be applied to the electrical measuring transducer, if it otherwise falls within the scope of this standard; c) to transducers for use in a variety of applications such as telemetry and process control and in one of a number of defined environments. This International Standard is intended: – to specify the terminology and definitions relating to transducers whose main application is in electrical power engineering, especially for the purposes of process control and telemetry systems; – to unify the test methods used in evaluating transducer performance; – to specify accuracy limits and output values for transducers.
2 Normative references The following referenced documents are indispensable for the application of this document. For dated references, only the edition cited applies. For undated references, the latest edition of the referenced document (including any amendments) applies. IEC 60050(301, 302, 303):1983, International Electrotechnical Vocabulary (IEV). Chapter 301: General terms on measurements in electricity. Chapter 302: Electrical measuring instruments. Chapter 303: Electronic measuring instruments IEC 60051-1:1997, Direct acting indicating analogue electrical measuring instruments and their accessories – Part 1: Definitions and general requirements common to all parts IEC 60068-2-3:1985, Environmental testing – Part 2: Tests – Test Ca: Damp heat, steady state IEC 60255-4 * :1976, Electrical relays – Part 4: Single input energizing quantity measuring relays with dependent specified time IEC 60521:1988, Class 0,5, 1 and 2 alternating-current watt-hour meters IEC 61000-4, Electromagnetic compatibility (EMC) – Part 4: Testing and measuring techniques IEC 61010-1:2001, Safety requirements for electrical equipment for measurement, control and laboratory use – Part 1: General requirements NOTE Refer to annex A for the list of informative references. 3 Definitions For the purpose of this International Standard the following definitions apply: 3.1 General terms 3.1.1 electrical measuring transducer (hereinafter designated “transducer”) a device for converting an a.c. measurand to a direct current, a direct voltage or a digital signal for measurement purposes 3.1.2 auxiliary supply an a.c. or d.c. electrical supply, other than the measurand, which is necessary for the correct operation of the transducer 3.1.3 auxiliary circuit a circuit which is usually energized by the auxiliary supply. NOTE The auxiliary circuit is sometimes energized by one of the input quantities.
3.1.4 transducer with offset zero (live zero) a transducer which gives a predetermined output signal other than zero when the measurand is zero 3.1.5 transducer with suppressed zero a transducer for which zero output signal corresponds to a measurand greater than zero 3.1.6 distortion factor the ratio of the r.m.s. value of the harmonic content to the r.m.s. value of the non-sinusoidal quantity 3.1.7 output load (for analogue signals only) the total resistance of the circuits and apparatus connected externally across the output terminals of the transducer 3.1.8 ripple content (of an analogue output signal) with steady-state input conditions, the ratio of the peak-to-peak value of the fluctuating component of an analogue output signal, expressed in percentage, to the fiducial value 3.1.9 output signal an analogue or digital representation of the measurand 3.1.10 output power the power at the transducer output terminals 3.1.11 output current (voltage) (for analogue signals only) the current (voltage) produced by the transducer which is an analogue function of the measurand 3.1.12 reversible output current (voltage) (for analogue signals only) an output current (voltage) which reverses polarity in response to a change of sign or direction of the measurand 3.1.13 measuring element of a transducer a unit or module of a transducer which converts the measurand, or part of the measurand, into a corresponding signal. 3.1.14 single element transducer a transducer having one measuring element