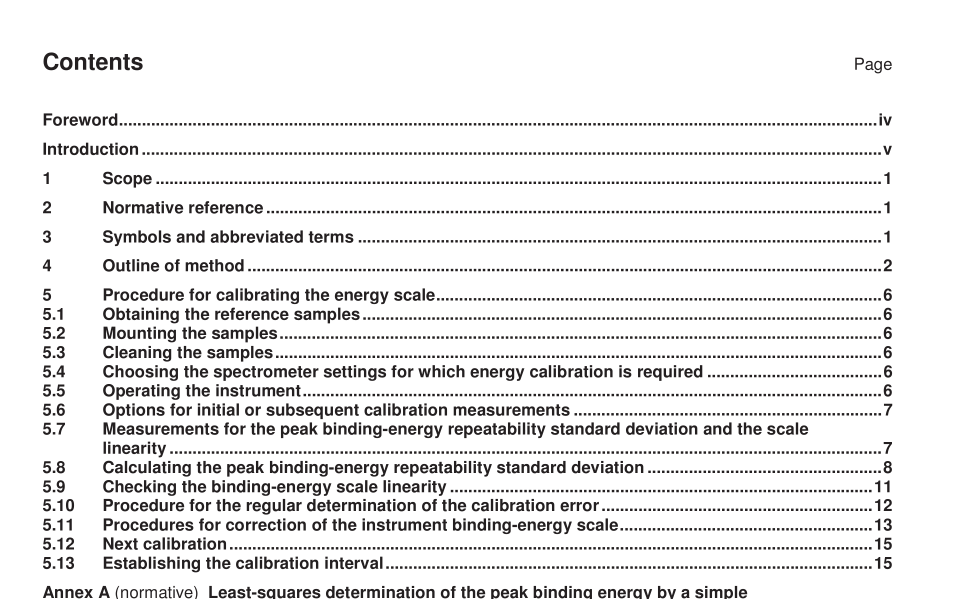 BS ISO 15472:2001 pdf – Surface chemical analysis — X-ray photoelectron spectrometers — Calibration of energy scales.
1 Scope This International Standard specifies a method for calibrating the binding-energy scales of X-ray photoelectron spectrometers, for general analytical purposes, using unmonochromated Al or Mg X-rays or monochromated Al X-rays. It is only applicable to instruments which incorporate an ion gun for sputter cleaning. This International Standard further specifies a method to establish a calibration schedule, to test for the binding-energy scale linearity at one intermediate energy, to confirm the uncertainty of the scale calibration at one low and one high binding- energy value, to correct for small drifts of that scale and to define the expanded uncertainty of the calibration of the binding-energy scale for a confidence level of 95 %. This uncertainty includes contributions for behaviours observed in interlaboratory studies but does not cover all of the defects that could occur. This International Standard is not applicable to instruments with binding-energy scale errors that are significantly non-linear with energy, to instruments operated in the constant retardation ratio mode at retardation ratios less than 1 0, to instruments with a spectrometer resolution worse than 1 ,5 eV, or to instruments requiring tolerance limits of ? 0,03 eV or less. This International Standard does not provide a full calibration check, which would confirm the energy measured at each addressable point on the energy scale and which would have to be performed in accordance with the manufacturer’s recommended procedures. 2 Normative reference The following normative document contains provisions which, through reference in this text, constitute provisions of this International Standard. For dated references, subsequent amendments to, or revisions of, any of these publications do not apply. However, parties to agreements based on this International Standard are encouraged to investigate the possibility of applying the most recent edition of the normative document indicated below.
For the first calibration, it is assumed that there has been no characterization of the spectrometer behaviour. Thus, at 5.7, measurements are made of the binding energies of the Cu 2p 3/2 , Ag 3d 5/2 or Cu L 3 VV, and Au 4f 7/2 peaks in a sequence repeated seven times. These data give the repeatability standard deviations ? R1 , ? R2 or ? R3 , and ? R4 for the three peaks used. These standard deviations have contributions from the stability of the spectrometer electronic supplies, from the sensitivity of the measured peak energy to the sample position and from the statistical noise at the peak. In the procedure, conditions are defined to ensure that the statistical noise is relatively small. The other two contributions may vary with the measured binding energy and so ? R is defined as the greatest of the values obtained for the three peaks used. The value of ? R may depend on the sample-positioning procedure. At 5.7.1 , the use of a consistent sample-positioning procedure is required and the final calibration is only valid for samples positioned using this positioning procedure. Studies of spectrometers show that, in general, any measured error in the peak energies varies approximately linearly with the peak binding energy. The equations presented in this International Standard are valid only for this most common situation and are based on the principle that the difference between the measured binding energies and the reference binding energies are both small and are linearly, or close to linearly, dependent on the binding energy. This linearity may fail if the instrument is defective and so a test is provided at 5.7 and 5.9 to confirm the closeness to linearity at an intermediate energy. For convenience, this test involves the copper Auger electron peak for both Al and Mg unmonochromated X-ray sources. However, for monochromated Al X-rays, the effective X-ray energy for different instruments may vary by up to 0,2 eV, depending on the precise settings of the monochromator