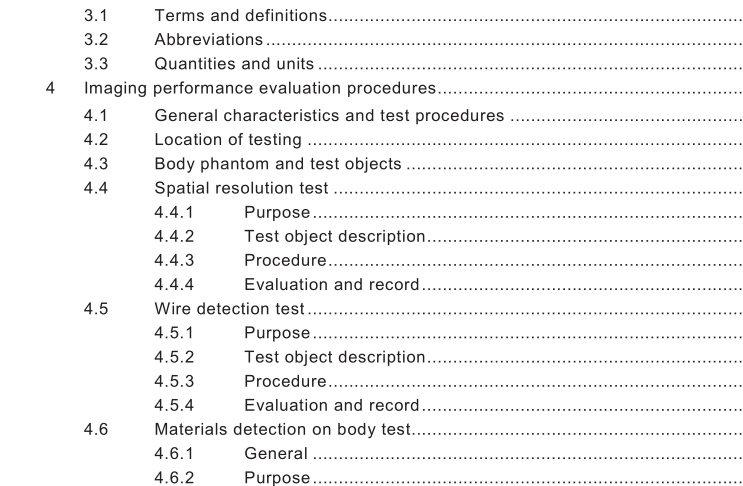 BS IEC 62709 2014 pdf – Radiation protection instrumentation — Security screening of humans — Measuring the imaging performance of X-ray systems.
The following types of systems are included in the scope of this standard: • Systems designated as fixed, portal, transportable, mobile or gantry. • Systems employing detection of primary radiation, backscattered radiation, forward- scattered radiation, (see Annex D) or some combination of these modalities to form two- dimensional X-ray images. • Systems that are primarily imaging but that also may have complementary features such as material discrimination, automatic active or passive detection alerts. This standard will not address how to test these complementary features. The objective is to provide standard methods of measuring and reporting imaging quality characteristics that enable system manufacturers, potential system users and other interested parties to: a) Establish a consistent indicator of the expected technical performance of screening systems used for the inspection of individuals. Such technical performance testing complements explicit detection testing and evaluation. In this standard “detection” refers to items in an image. b) Provide repeatable and verifiable imaging performance data that can be used to compare systems from different vendors. c) Establish a baseline that can be used over time to calibrate the system or detect any performance degradation. (It is not intended that the entire test method be employed for daily quality assurance testing.) d) Establish minimum acceptable performance requirements for the systems described above. 2 Normative references The following documents, in whole or in part, are normatively referenced in this document and are indispensable for its application. For dated references, only the edition cited applies. For undated references, the latest edition of the referenced document (including any amendments) applies.
3 Terms and definitions, abbreviations, quantities and units 3.1 Terms and definitions For the purposes of this document, the following terms and definitions apply. The general terminology concerning X-ray systems and radiological physics is given in IEC 60050-393:2003, IEC 60050-394:2007 and IEC 60050-881 :1 983. 3.1.1 backscattered radiation backscatter scattering of photons by material through angles greater than 90° with respect to their initial direction [SOURCE: IEC 60050-393:2003, 393-1 3-1 4] 3.1.2 backscatter system security screening system that makes use of backscattered radiation to form an image 3.1.3 contrast sensitivity the ability to distinguish a small difference of intensity in an area of an X-ray image from a surrounding uniform background [SOURCE: IEC 62523:201 0] 3.1.4 edge detection ability to discern edges of objects or anomalies even when the bulk of the objects or anomalies may appear with the same brightness as the background 3.1.5 forward-scattered radiation scattering of photons by material through angles less than 90° with respect to their initial direction 3.1.6 forward-scatter system security screening system that makes use of forward-scattered radiation to form an image 3.1.7 influence quantity quantity that is not the measurand but that affects the result of the measurement [SOURCE: IEC 60050-394:2007, 394-40-27]
3.1.8 materials detection test of the ability to detect materials on or off the body phantom 3.1.9 mobile system system that is mounted on a vehicle which moves while scanning 3.1.10 operator person authorised and fully trained to operate the system [SOURCE: IEC 62463:201 0] 3.1.11 partial body field of view field of view of systems designed to scan parts of the body, such as cast and prostheses scanners or shoe scanners 3.1.12 penetration test test of spatial resolution and wire detection as a function of body phantom thickness 3.1.13 pentalith spatial resolution test object consisting of five equal spheres placed at the vertices of a regular pentagon. The vertices are separated by twice the diameter of the spheres Note 1 to entry: See Annex C for a complete description. 3.1.14 primary radiation ionizing radiation emitted directly by a radiation source [SOURCE: IEC 60050-393:2003, 393-1 2-1 9] 3.1.15 radiation source equipment or matter emitting or capable of emitting ionizing radiation [SOURCE: IEC 60050-393:2003, 393-1 2-23] 3.1.16 reference location required location where test objects are placed for assessing imaging performance according to this standard Note 1 to entry: The reference location is specified in 4.2. Note 2 to entry: Other testing locations may be used for additional information. 3.1.17 scan area field of view of a screening system at a given distance from the source of radiation