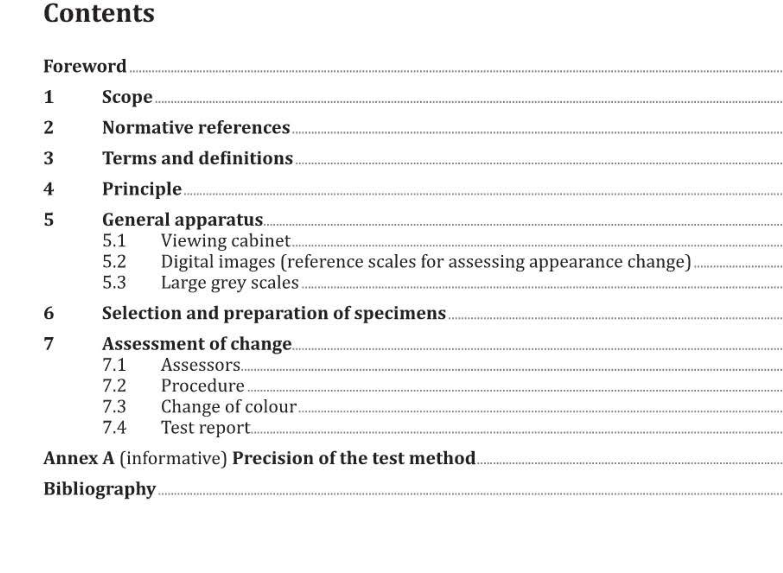 BS EN ISO 9405:2017 pdf – Textile floor of changes in appearance (ISO 9405:2015).
1 Scope This International Standard describes the proced u res for assessing the overa ll change in appearance of textile flo or coverings cau se d by Vetter m an n dru m a nd hexapo d tu m bler tes ters acco rd ing to I SO 1036 1 a nd ISO 4918. 2 Normative references The foll owing docu men ts , in whole or in part , are n ormatively refe r enced in this docu ment and are indispensab le for its application. For dated references , only the edition cited applies. For undated references , the latest edition of the referenced document (i ncluding any amendments) applies. ISO Textiles – Tests for colour fastness – Part AOl: principles oftesting ISO 105-A02 , Textiles – Tests for colour fastness – Part A02: Grey scale for assessing change ín colour ISO 2424 , Textile floor coverings – Vocabulary ISO 4918 , Resilient , textile and laminate floor coverings – Castor chair test I SO 1036 1, Textile Floor coverings – Production of in appearance by means ofVettermann drum and tumbler testers 3 Terms and definitions For the purposes of this document , the terms and definitions given in I SO 2424 and the following apply: 3.1 ch a nge in s urface appearance difference between a fatigued and an unfatigued specimen Note 1 to entry: The degree of change is expressed by reference to standard digital image reference scales and by reference to large grey scales , grade 5 representing no change and grade 1 an extreme change. Note 2 to entry : Cha nges in str u ct ure , roughness , colour , andjor patte rn of a textile floor covering may contribute to change in appearance. It is n ot always possible to distinguish clearly between the factors since each ca n have an interaction wi th others. 3.2 chang e in structur e texturaI change visible change in conf i gurat i on ofl oops a nd tuft s a nd jor fib res at t he u se – surface of a t ex tile fl oor cover i ng
3.5 felting matting loss of pile definition of a textile floor covering due to entanglement and compression of pile fibres 3.6 hairiness filamentation protrusion of fibres above the normal level of the use-surface of a textile floor covering and not removable by brushing or suction 3.7 cobwebbing extreme form of hairiness in which the fibres are entangled to form an interlaced web attached to the use-surface 3.8 pilling extreme form of hairiness which the fibres are entangled to form sma Il aggregates , attached to the use-surface , which can or cannot in cI ude fibres from other sources 3.9 sprouting release and appearance during use of extra-long tuft legs which were accidenta Il y trapped within the pile of a textile floor covering during manufacture 3.10 change of pattern definition change in the colour appearance of patterned textile floor coverings due to mechanical action Note 1 to entry: A change ofpattern definition can be caused by a change in the clarity ofthe contour Ii nes. 3.11 change in colour change or apparent change in col our , assessed by a large grey scale , resu l ting from a change in orientation of the pile (shading) , whitening (chalking) , fading , gIossing , colour bleeding , staining , soiling , or a combination of these Note 1 to entry: It is not always possible to distinguish cJ early between the above factors since each has an interaction with others. 4 Principle The change in appearance of a specimen after a process of fatiguing is assessed by visual comparison with standard digital image scales. The degree of change is expressed by a single grade. The dominant factors (change in surface appearance , colour , and/o r pattern) ofthe change are observed a nd recorded.