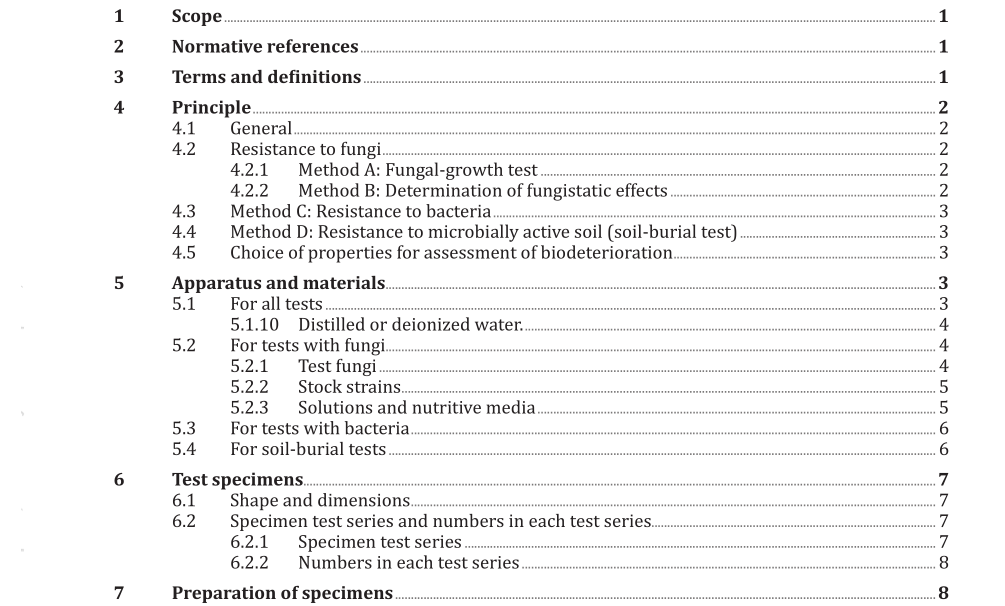 BS EN ISO 846:2019 pdf – Plastics – Evaluation of the action of microorganisms.
1 Scope This document specifies methods for determining the deterioration of plastics due to the action of fungi and bacteria and soil microorganisms. The aim is not to determine the biodegradability of plastics or the deterioration of natural fibre composites. The type and extent of deterioration can be determined by a) visual examination and/or b) changes in mass and/or c) changes in other physical properties. The tests are applicable to all plastics that have an even surface and that can thus be easily cleaned. The exceptions are porous materials, such as plastic foams. This document uses the same test fungi as IEC 60068-2-10. The IEC method, which uses so-called “assembled specimens”, calls for inoculation of the specimens with a spore suspension, incubation of the inoculated specimens and assessment of the fungal growth as well as any physical attack on the specimens. The volume of testing and the test strains used depend on the application envisaged for the plastic. 2 Normative references The following documents are referred to in the text in such a way that some or all of their content constitutes requirements of this document. For dated references, only the edition cited applies. For undated references, the latest edition of the referenced document (including any amendments) applies. ISO 13934-1:2013, Textiles — Tensile properties of fabrics — Part 1: Determination of maximum force and elongation at maximum force using the strip method EN 10088-1, Stainless steels — Part 1: List of stainless steels EN 10088-2, Stainless steels — Part 2: Technical delivery conditions for sheet/plate and strip corrosion resisting steels for general purposes EN 13697:2015, Chemical disinfectants and antiseptics — Quantitative non-porous surface test for the evaluation of bactericidal and/or fungicidal activity of chemical disinfectants used in food, industrial, domestic and institutional areas — Test method and requirements without mechanical action (phase 2, step 2)
4 Principle 4.1 General The test involves exposing test specimens of plastic to the action of selected test strains of fungi and bacteria (or, in the case of the soil-burial test, to microbially active soil) for specified or agreed periods of time under specified conditions of temperature and humidity. At the end of the exposure, the test specimens are assessed before and/or after cleaning by visual examination and/or any change in mass or other physical properties is determined. The results obtained with the specimens exposed to microorganisms (test series I) are compared with those obtained from retained reference specimens (test series 0) or sterile specimens (test series S) kept under the same conditions. In the case of testing fungistatic properties, a visual assessment is made between test specimens free of biocides and with those containing biocides to demonstrate the effect of a biocide in a qualitative manner. Short descriptions of the test methods used to determine the resistance of plastics to fungi (method A) or the fungistatic effects (method B), resistance to bacteria (method C) and resistance to soil microorganisms (method D) are given in 4.2 to 4.4. 4.2 Resistance to fungi 4.2.1 Method A: Fungal-growth test Test specimens are exposed to a mixed suspension of fungal spores in the presence of a humidity ≥95 % relative humidity. After the limited nutrients from the spore itself are depleted through formation of a germination tube, the fungi can only grow at the expense of the material of the test specimens. If the specimens contain no nutritive component, the fungi cannot develop mycelia and there will be no deterioration of the plastic. Method A is suitable for the assessment of the inherent resistance of plastics to fungal attack in the absence of other organic matter. 4.2.2 Method B: Determination of fungistatic effects Test specimens are exposed to a mixed suspension of fungus spores in the presence of a complete nutrient medium, i.e. with a carbon source.