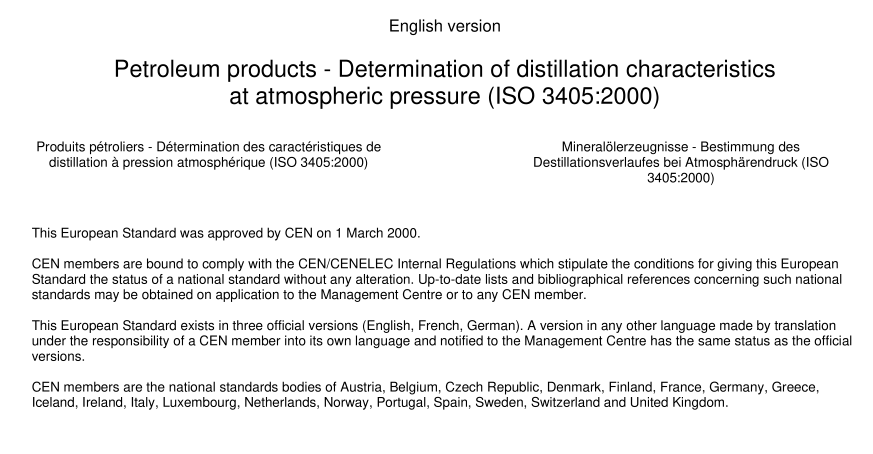 BS EN ISO 3405:2000 pdf – Methods of test for petroleum and its products — BS 2000-123: Petroleum products — Determination of distillation characteristics at atmospheric pressure (ISO 3405:2000) — (Identical with IP 123-2001).
1? Scope This International Standard specifies a laboratory method for the determination of the distillation characteristics of light and middle distillates derived from petroleum with initial boiling points above 0 ?C and end-points below approximately 400 ?C, utilizing either manual or automated equipment, with the manual procedure being the referee method in cases of dispute, unless otherwise agreed. NOTE? The method is applicable to petroleum products incorporating a minor constitution of components from non- petroleum origin, but the precision data may not apply in all cases. The distillation (volatility) characteristics of hydrocarbons have an important effect on their safety and performance, especially in the case of fuels and solvents. The boiling range gives important information on composition and behaviour during storage and use, and the rate of evaporation is an important factor in the application of many solvents. Limiting values to specified distillation characteristics are applied to most distillate petroleum product specifications in order to control end-use performance and to regulate the formation of vapours which may form explosive mixtures with air, or otherwise escape into the atmosphere as emissions (VOC). 2? Normative references The following normative documents contain provisions which, through reference in this text, constitute provisions of this International Standard. For dated references, subsequent amendments to, or revisions of, any of these publications do not apply. However, parties to agreements based on this International Standard are encouraged to investigate the possibility of applying the most recent editions of the normative documents indicated below. For undated references, the latest edition of the normative document referred to applies. Members of ISO and IEC maintain registers of currently valid International Standards. ISO 91 8:1 983, Volatile organic liquids for industrial use — Determination of distillation characteristics .
3? Terms and definitions For the purposes of this International Standard, the following terms and definitions apply. 3.1 decomposition point thermometer reading (corrected) which coincides with the first indications of thermal decomposition of the liquid in the flask NOTE? Characteristic indications of thermal decomposition are an evolution of fumes and erratic thermometer readings which usually show a decided decrease after any attempt has been made to adjust the heat. 3.2 dry point thermometer reading (corrected) that is observed at the instant the last drop of liquid evaporates from the lowest point in the flask; any drops or film of liquid on the side of the flask or on the thermometer are disregarded NOTE? The end-point (final boiling point), rather than the dry point is intended for general use. The dry point can be reported in connection with special purpose naphthas, such as those used in the paint industry. Also, it is substituted for the end-point (final boiling point) whenever the sample is of such a nature that the precision of the end-point cannot consistently meet the requirements given in clause 1 2. 3.3 end-point final boiling point maximum thermometer reading (corrected) obtained during the test NOTE? This usually occurs after evaporation of all liquid from the bottom of the flask. 3.4 initial boiling point thermometer reading (corrected) that is observed at the instant that the first drop of condensate falls from the lower end of the condenser tube 3.5 percent evaporated sum of the percent recovered and the percent loss 3.6 percent loss 1 00 minus the total recovery NOTE? Sometimes called “front-end loss”; this is the amount of uncondensed material lost in the initial stages of the distillation.