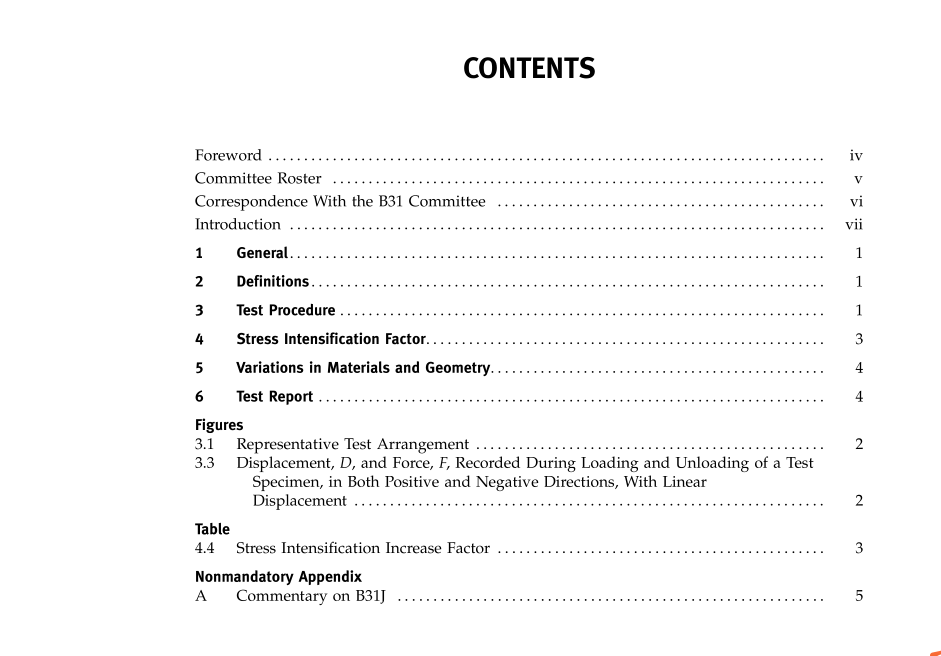 ASME B31J-2008 pdf download.Standard Test Method for Determining Stress Intensification Factors (i-Factors) for Metallic Piping Components.
1 GENERAL The ASME B31 Code for Pressure Piping and the ASME Boiler and Pressure Vessel Code, Section III, Nuclear Components, Subsections NC and ND piping rules require the use of stress intensification factors (i-factors or SIFs) when checking the adequacy of com- ponents and joints (welded and nonwelded) in piping subject to loadings, including those cyclic loadings that may produce fatigue failures. As used herein, where the word “Code” is used without specific identification, it means theCode orStandardwhichincorporates orrefer- ences this Standard. The piping Codes provide stress intensification factors for the most common piping com- ponents and joints. This Standard presents an experi- mental method to determine SIFs. 2 DEFINITIONS piping components: mechanical elements suitable for join- ing or assembly into pressure-tight, fluid-containing piping systems. Components include pipe, tubing, fit- tings, flanges, gaskets, bolting, valves, and devices such as expansion joints, flexible joints, pressure hoses, traps, strainers, in-line portions ofinstruments, and separators. stress intensification factor: a fatigue strength reduction factor that is the ratio of the elastically predicted stress producing fatigue failure in a given number of cycles ina buttweld ona straightpipe to thatproducingfatigue failure in the same number of cycles in the component or joint under consideration. 3 TEST PROCEDURE 3.1 Test Equipment A schematic of a test arrangement is given in Fig. 3.1. (a) The machine framework must be sufficiently stiff to prevent significant rotation at the fixed end of the assembly. A significant rotation is one readily visible to the observer. (b) The pipe component shall be mounted close to the fixed end of the test assembly, but no closer than two pipe diameters. (c) The test rig shall be capable of applying a fully reversed displacement at the free end without binding in the two orthogonal directions. That is, the free end shall not bind the assembly in a direction out of the plane of testing. (d) The test equipment shall be calibrated to read dis- placements with an accuracy of 1% of the imposed dis- placement amplitude. (e) The piping attached directly to the tested compo- nent should be a similar schedule to the tested com- ponent. 3.2 Test Specimen The test specimen may be lower strength carbon steel, such as ASTM A 106 Grade B pipe or ASTM A 234 Grade WPB fittings, and equivalent plates and forgings, corresponding to the “UTS < 80 ksi” curve in Fig. 5-110.1 of Appendix 5 of Section VIII, Division 2 of the ASME Boiler and Pressure Vessel Code. For other materials, the material constant, C, shall be modified as described in para. 5.1. The fabrication, welding, and examinations of the tested components shall be the same as will be followed in fabrication of the component and installation for ser- vice. Weld contours should be representative of those intended to be used in fabrication and installation. 3.3 Applied Displacement Calibration (a) The testspecimenshall be placed inthe testassem- bly and displacements shall be applied in positive steps to obtain a load-displacement plot analogous to that shown in Fig. 3.3. At least five points shall be recorded in the linear region of the plot. (b) The initial loading sequence shall be stopped when it is clear from the load-displacement plot that the recorded load displacement is no longer linear, i.e., the loading sequence will require one or two steps into the nonlinear range. (c) The specimen must then be unloaded, following the same recording sequence as during loading. (d) Steps (a) through (c) are repeated in the negative direction to approximately the same negative displace- ment as the loading sequence reached in (b). (e) The linear region of the load-displacement curve and its straight-line extension will be used in determin- ing the force, F e , in para. 4.1.