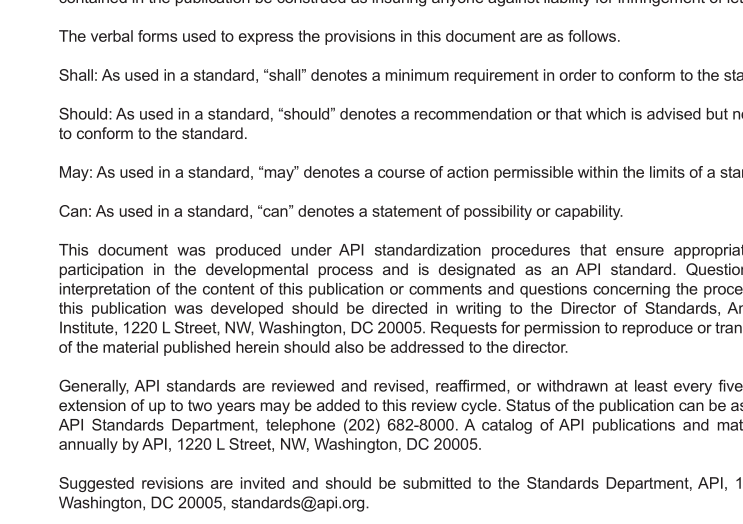 API TR 6MET-2018 pdf download.Metallic Material Limits for Wellhead Equipment Used in High Temperature for API 6A and API 17D Applications.
In Phase I and Phase II testing, three material test laboratories were selected to conduct elevated-temperature tests in accordance with ASTM E21 using 0.505 in. diameter test specimens. Of the three participating laboratories, the one with the best performance was selected to conduct all testing in Phase III. Phase I tensile specimens were removed from the mid-radius position. In Phase II and III, tensile specimens were removed from the 1 / 4 T position where possible. Mechanical tests were then performed at room temperature (RT), 300 °F, 350 °F, and 450 °F to permit bracketing of results. The task group analyzed the resulting yield strength (YS) data from all the labs for each heat of material. Finally, each supplier’s data is reported confidentially to that supplier only in exchange for the donation of material. The tensile properties at elevated temperature used conventional tensile testing equipment modified slightly to accommodate a radiant heating chamber. For precise control of temperature, the chamber was well insulated, which also minimized specimen exposure to undesirable surface contamination. The heating chamber was monitored using two thermocouples to maintain precise temperature control. A single thermocouple was used to control chamber atmosphere temperature while the second thermocouple was attached to the test specimen. Testing was initiated once the specimen and chamber atmosphere temperatures both reached equilibrium. Predetermined strain rates were maintained through break. Tensile strength determination was made by use of an attached Class B-2 extensometer. The extensometer was modified to accommodate an extended reach into the heating chamber to fully engage the test piece through break while shielding the instrument from extreme temperatures.
Prior to the start of Phase IV elevated-temperature tensile testing, a study of the effects of low-temperature aging was conducted. The purpose was to determine if low-temperature aging could have occurred during the Phase II testing and resulted in an increase in yield strength with increasing test temperature. This aging study was performed by a mill that melts and processes ASTM A453 Grade 660 into various mill product forms. Bars from a single heat of ASTM A453 Grade 660 were heat treated using the two different solution-annealing temperatures specified in ASTM A453 for Grade 660 Class D, and precipitation hardened using the single aging cycle from ASTM A453 for Grade 660 Class D. After solution annealing and precipitation hardening, the bars were subjected to additional thermal processing for 16 hours at the test temperatures used in the elevated-temperature tensile test program. Tensile specimens were then removed from the bars and tested at room temperature. Next, the elevated-temperature tensile test program was performed. Three heats of ASTM A453 Grade 660 Class D material from three different manufacturers were tested in accordance with ASTM E8 and ASTM E21, at two independent test laboratories. Another aging study was performed to investigate the behavior of the three specific heats used in this elevated- temperature tensile test program. Bars from each heat were aged at 400 °F for 1 hour to simulate the time the tensile test specimens spent at temperature during the elevated-temperature testing. Tensile specimens were then removed from the bars and tested at room temperature at one laboratory using triplicate samples.
Room temperature yield strength test results from three of the five heats of AISI 4130 were below 75 ksi. One heat was only 2 % below the required room temperature properties. However, two of those three heats were 12 % and 17 % below the minimum requirement. Material certification reports were reviewed by metallurgists on the task group and reasons for the low properties were not obvious. Averaging data from all the heats produced higher yield derating factors than seemed appropriate [92 % at 350 °F compared with current values in API 6A, for carbon and low-alloy steels of 85 % (see Bibliography)]. Consequently, results from two lowest property heats were ignored in the average, resulting in a yield derating of 90 % at 350 °F. This discrepancy from reported room temperature yield properties was not found on any of the other five alloys tested. The conclusion from this discovery is that low hardenability alloys used for heavy section equipment must have proper design qualification. Thus, averaging only three heats of 4130 produced an improved correlation to the other low-alloy steel’s yield reduction ratio than averaging all five heats (see Annex A).