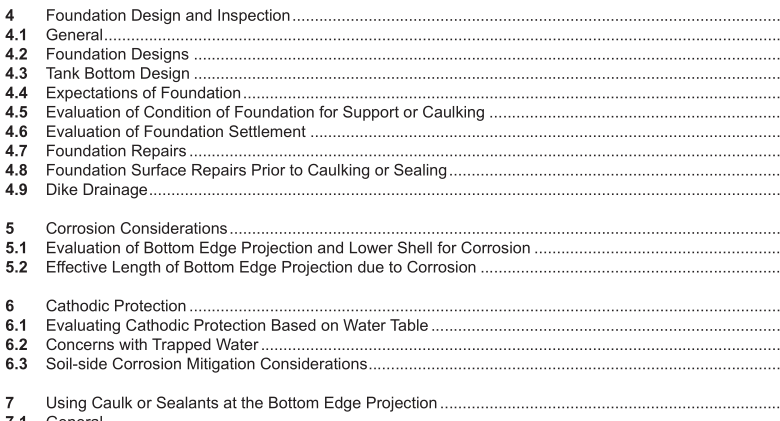 API TR 654-2019 pdf download.Aboveground Storage Tank Caulking or Sealing the Bottom Edge Projection to the Foundation.
3.2 caulk or sealant A material or system designed to seal a gap between construction materials to prevent water or other liquid from entering the gap. 3.3 false shell The remaining portion of the shell below the new second bottom when a double bottom is installed by slotting the shell and installing a new bottom some distance above the old. 3.4 foundation The element of construction that transfers the loads of the tank to the ground beneath. 3.5 joint The space or gap between the bottom edge projection and foundation. 3.6 ring wall foundation An element that transfers the load of the tank shell to the ground beneath, but not extending beneath the entire tank bottom. 4 Foundation Design and Inspection 4.1 General 4.1.1 There are many different foundation designs, as outlined in API Standard 650. The design of the founda- tion is based on several factors, including but not limited to: — size of the tank, — product contained, — soil type, — potential ground settlement, — rainfall, — drainage, — design of fll system and product piping, and — external loads and conditions such as wind, snow, seismic, and temperature fuctuations. 4.1.2 The intent of this document is to provide familiarity with the different designs found on existing tanks and the corrosion-related concerns with each design. In instances where there is a requirement for secondary con- tainment, the connection between the facility’s secondary containment and the tank foundation (or the tank itself) is important and the detail of the connection is critical to effective containment, corrosion prevention, and future tank inspection. This is especially true if the secondary containment is directly connected to the bottom edge projection instead of a ring wall foundation.
4.2 Foundation Designs 4.2.1 Full Concrete Pad In some instances, especially with smaller tanks, the tank may be resting on a reinforced concrete pad that ex- tends completely beneath the tank. If the concrete is structurally sound and there are no cracks, it is conceivable that there is little possibility of groundwater entering the area beneath the tank bottom from the underside. If surface water from rainfall can accumulate in the tank dike at levels above the bottom and there is a risk of water entering the gap between the tank and full concrete foundation, caulk or sealant may be of value and should be considered. 4.2.2 Ring Wall Foundation The greatest load to the ground is found beneath the shell at the perimeter of the tank. In designing a concrete ring wall foundation, the intent is to provide uniform, structurally sound support to the perimeter of the tank shell. The intent of the concrete ring wall is to minimize or prevent edge settlement, which can occur over time. The foundation may settle uniformly or may settle in an uneven fashion. When the foundation settles unevenly, the potential exists for gaps between the foundation and the bottom. Depending on the size of the gap, there is the possibility of selective edge settlement causing stress in the corner weld, as well as the possibility for water to intrude beneath the tank bottom from the containment dike. 4.2.3 Directly on Earthen Materials In cases where the tank bottom rests directly on a non-concrete surface, such as soil or other granular material, caulking or sealing is not possible and is not within the scope of this document. API Standard 650, Section 5.4.5, offers guidance for new tanks, but owner/operators can incorporate some of the new tank details on existing tanks. Some European designs are also available, including rain hoods and angle irons.