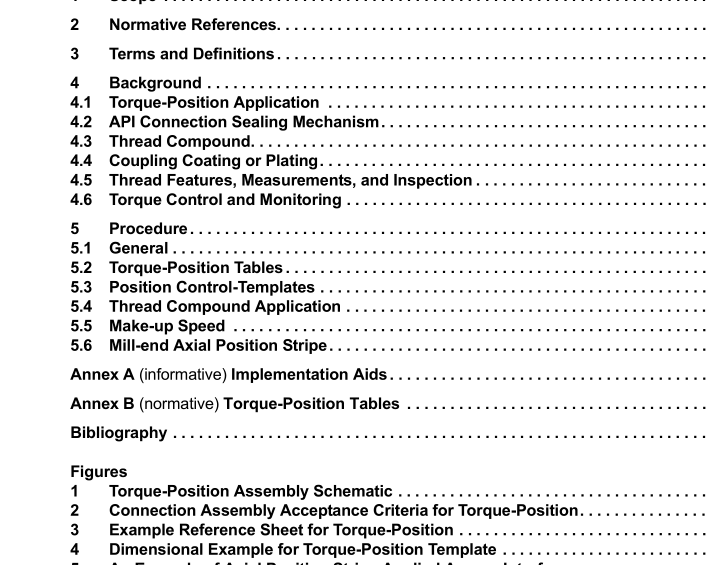 API TR 5TP-2013 pdf download.Torque-Position Assembly Guidelines for API Casing and Tubing Connections.
3.7 torque-position An assembly technology for selected API connections that features criteria for acceptance of the assembly based on engagement of the pin within the coupling (position) and final torque. 3.8 4T A variation of torque-position intended for BC connections on 8 5 / 8 -in. through 20-in. OD casing that requires tin-plated couplings and a thread compound that has polytetrafluoroethylene (PTFE) particles. The term “4T” represents torque, triangle, tin, and PTFE. 4 Background 4.1 Torque-Position Application Torque-position is a precision assembly method for assembling API connections. The connection is made up within a prescribed torque range using hydraulic power tongs, such that the face of the coupling progresses into a position band stenciled on the OD of the pipe. Connections that do not meet both the torque and position criteria are rejected. The use of torque-position connection assembly procedures and the application of this document shall be by agreement between the user/purchaser and the manufacturer. These guidelines shall be used at the designated mill, processor’s facility, and rig site in order to ensure appropriate assembly of the connections (see Figure 1 and Figure 2). 4.2 API Connection Sealing Mechanism API connections rely on contact pressure on the thread flanks to form an effective seal and a particulate thread compound to plug the root-to-crest gap on 8-round connections (SC, LC, EU) and thread flank gaps on buttress connections. In an interference connection, the threads on both the pin and coupling are cut at a matching angle or taper. As the connection is made up, the pin becomes wedged into the coupling creating contact pressure. This contact or bearing pressure is the sealing mechanism for this connection. To form a leak-resistant seal, the bearing pressures on the thread flanks must be greater than the internal pressure.
4.3 Thread Compound Thread compound serves three basic functions: 1) seals the thread clearances in the thread profile, 2) lubricates the threads during make-up, and 3) resists galling that results from metal-to-metal contact. Most thread compounds consist of particles suspended in carrier grease. The types and ratios of the particles generally determine the performance of a thread compound. Torque-position technology was developed using API 5A3 Reference compound (formerly called API Modified) for 8-round and non-4T buttress connections and a PTFE-based thread compound for BC 4T make-up. 4.4 Coupling Coating or Plating API couplings intended for assembly with torque-position parameters should have a phosphate coating or tin plating on the threads to prevent galling during assembly and to assist in providing seal integrity. The type of coating or plating used will affect the assembly torque. Torque values for tin-plated couplings are much lower than for phosphate coated couplings; therefore, a separate torque range is given in the tables.
4.5 Thread Features, Measurements, and Inspection Maintaining all thread parameters set forth by API 5B will ensure downhole performance and smooth assembly operations. Significant variations in thread height, lead, and taper can affect the assembly torque and subsequent performance. Two additional measurements are critical but are not specified in the 15th Edition of API 5B: crest diameter and ovality. Specifying requirements for crest diameter and ovality measurements when ordering pipe is recommended in order to achieve more consistent assembly results, fewer rejected make-ups, and better field performance for the resulting connections. Note that satisfying the crest diameter tolerances may require tighter control of other API 5B thread element dimensions. Additionally, addendum measurements that relate the crest diameter to the pitch diameter may be necessary when setting up for threading. Follow the crest diameter gauge manufacturer’s measurement procedures to obtain a maximum and minimum reading of local crest diameter around the circumference of the thread (typically expressed as a variation from the nominal value). The average crest diameter referenced in Table 1 and Table 2 is defined as the average of the minimum and maximum readings. The ovality of the thread is defined as the algebraic difference between the minimum and maximum readings. Formulas for determining ovality limits are provided in Table 3.