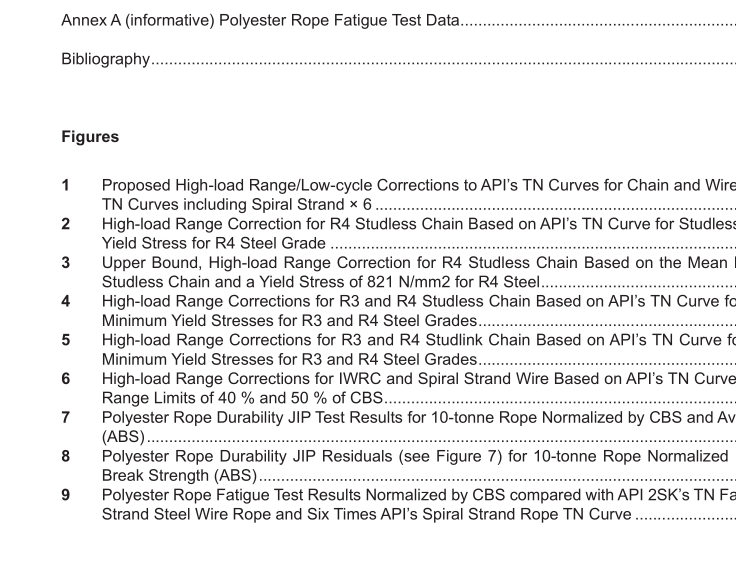 API TR 2FC-2-2020 pdf download.Fatigue TN Curves for Chain, Wire, and Polyester Mooring Lines (Including Corrections for High-tension Ranges).
Figure 6 clearly illustrates that API’s TN curves for IWRC and spiral strand wire are not conservative for high- tension ranges, as fatigue lives in excess of 100 cycles are predicted for load ranges that exceed the break strength of the wire. The dashed part of API’s TN curve, shown in Figure 6, should not be used in calculating fatigue damage, as it under-predicts fatigue damage. For IWRC and spiral strand wire, rope fretting damage to the individual wires within the rope occurs when the rope is subject to high cyclic tension ranges. It is recommended that the wire rope fatigue curves contained in API 2SK not be used for tension ranges above 50 % of CBS, as fretting will reduce the fatigue life below that predicted by API’s TN curves. The correction for high-tension ranges to API 2SK’s TN curves for wire ropes are calculated in the same way as for chain. Figure 6 shows the corrections to API’s TN curves for IWRC and spiral strand wire based on elastic tension range limits of 40 % and 50 % of CBS.
In API 2SM, First Edition, a regression ft to the results from 11 fatigue tests on polyester ropes, regarded as valid tests, were used to defne the fatigue curve for polyester rope presented in Figure 4.6.7.2. Since that time the Polyester Rope Durability JIP performed fatigue tests on 10-tonne polyester ropes (28 valid tests) from three rope manufactures and reported nine fatigue test results for 6-tonne sub-ropes. The results from all these tests are summarized in the tables provided in Annex A. The Polyester Rope Durability JIP presents the results of the fatigue tests on 10-tonne ropes normalized by the average break strength (ABS) of similar ropes made by the three diferent rope manufactures. The ABS of the ropes from the manufacturers tested are reported to be 18.9 %, 3.6 % and 16.1 % higher than the CBS (10 tonnes), for the three manufacturers respectively. The ABS of the 6-tonne sub-ropes tested by the Polyester Rope Durability JIP are not defned, and these results are presented normalized by 6 tonnes in all cases. The introduction of ABS to normalize mean load and tension ranges, results in an increase in the scatter of the test results, the standard deviation of the residual increases from 0.172 (normalized by CBS) to 0.241 (normalized by ABS), see Figure 7 and Figure 8. Additionally, the use of ABS introduces yet another defnition of strength that in most cases will be unknown to the mooring analyst at the time that the fatigue analysis of the mooring system is performed.
For the 28 valid 10-tonne test results, the average of the mean loads was ~48 % CBS, while the maximum mean load was ~71 % CBS. The average mean load range was ~47 % CBS with a maximum load range of 60 % CBS. While the average maximum load (mean + 1 / 2 load range) was 71 % CBS (well above API’s allowable intact tension limit of 60 % CBS), with the largest maximum load of ~92 % CBS. The use of these extreme loading conditions in the fatigue tests is an indication of the excellent fatigue properties of polyester rope which requires extreme loading conditions in order that the fatigue failures can be induced in a test program that may be completed in a reasonable time and is therefore economic to perform. Also note that the frequencies, between 1 Hz and 4 Hz, at which the fatigue tests were performed, were also extremely high. At present, API 2SK does not provide any guidance on the fatigue curve to be used for polyester rope. However, ISO 19901–7 contains the following: “The fatigue life of well-constructed polyester and HMPE rope lines may typically be assumed to be at least six times that given in Table 3 for a spiral strand wire rope at Q = 0.3 [i.e. K = 1000 in Equation (12)], for load ranges not exceeding 50 % of MBS.” Figure 9 presents all the fatigue test results for 10-tonne and 6-tonne ropes from the Polyester Rope Durability JIP along with the older results from API 2SM, First Edition. Also shown in Figure 9 are the mean regression ft and the mean minus two standard deviation curve and API 2SK’s spiral strand TN curve (with high-tension range correction) and six times the spiral strand TN curve.