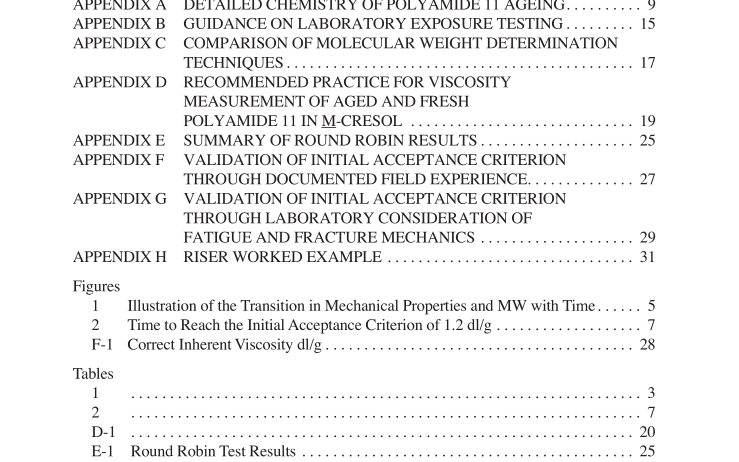 API TR 17TR2-2003 pdf download.The Ageing of PA-11 in Flexible Pipes.
3 Service Life Prediction Models 3.1 GENERAL The service life prediction models consist of tools for pre- dicting the ageing of PA-11 with time over Þeld exposure, and initial acceptance criteria, based on corrected inherent viscosity, as described in 2.8. Service life prediction tools can be used to predict changes in molecular weight and correlated properties over Þeld life. Typically at the preliminary design stage, where relevant operational parameters are not completely deÞned, as a Þrst approach, a MinerÕs type rule is assumed for accumulated operational history, such as changes in temperature, water production, methanol injection etc. In this instance, the appropriate ageing curves from 3.4 can be employed. Much more comprehensive models exist for use during detailed design and operation, which predict PA-11 pressure sheath life, based on detailed planned or actual operational exposure. These models are based on the rigorous chemical and physical considerations outlined in Appendix A. 3.2 INPUT PARAMETERS In order to utilise the models, both material and operational data are needed.
For evaluation of manufactured or aged pipes, the initial molecular weight or inherent viscosity should be that mea- sured on the manufacturing run of the actual pipe in question, according to procedures in Appendix D. Operational data must be provided, in as much detail as possible. For example, at the design stage, a typical data set might include: temperature; water cut with time; CO 2 levels; pressure; predicted downtime; crude acidity; hot oil regime; etc. It is also necessary to include estimated cumulative expo- sure to production chemicals, e.g., methanol, acid etc. Tem- perature gradients across the pressure sheath thickness should not be considered. Given the sensitivity of the service life models to tempera- ture, inclusion of the temperature proÞle of the development over Þeld life in any analysis can improve the reliability and accuracy of the predictions derived. As a project moves into the operational phase, the extent and accuracy of this data should increase and PA-11 service life veriÞcation can form part of the overall ßexible pipe integrity assurance process. 3.3 INITIAL ACCEPTANCE CRITERIA The initial acceptance criterion for PA-11 pressure sheathes is based on the corrected inherent viscosity of the most highly degraded material on the inside bore of the sheath reaching a certain deÞned level. It is acknowledged that in practise there may be a gradient of corrected inherent viscosity across the wall thickness of the pressure sheath. Therefore, depending upon the failure mode, consideration of only the most highly degraded material is a conservative approach. Once the initial acceptance criterion is reached, the pres- sure sheath has aged signiÞcantly, as illustrated in Figure 1. In order to continue using the pipe, an analysis of potential fail- ure modes should be performed. This will aim to evaluate the margin of safety and address risk and criticality, in a remnant life assessment, considering recovery and re-use if applicable. It should be noted that there is potentially a good case for reducing the initial acceptance criterion to 1.1 dl/g in case of static applications. There are several reasons for this: a. Stress levels ÑIn static applications, a pressure sheath is typically only subjected to thermal stresses which are lower than 3 MPa, e.g., in the case of cool down from 75¡C to 20¡C. In a dynamic application, stresses as a result of vessel motion, typically range from 6 to 26 MPa, ignoring thermal stresses. b. Number of cycles ÑA static pipe is typically subjected to 1000 to 5000 temperature and pressure cycles over its life- time, whereas a dynamic pipe will see a much larger number of stress cycles, typically 10 8 . c. Low strain rate ÑIn static applications, strains rates are typically very low. There is a growing body of evidence to suggest that under such circumstances the ductile / brittle transition occurs at temperatures below those encountered in typical Þeld conditions. d. Field experience ÑAs shown in Appendix F, all the fail- ures of static lines have involved PA-11 material with corrected inherent viscosity lower than 0.95 dl/g. This case for setting a reduced initial acceptance criterion for static pipe is currently undergoing further reÞnement. 3.4 AGEING CURVES The prediction curves in Figure 2 are derived from the ini- tial acceptance criterion of CIV = 1.2 dl/g. The mathematical relations for these curves are tabulated in Table 2. The API RP 17B relations have been taken from close examination of Figure 21 in the Third Edition (3) . The Òunsat- uratedÓ RP 17B curve is still to be employed in dry service, as deÞned in 2.2.