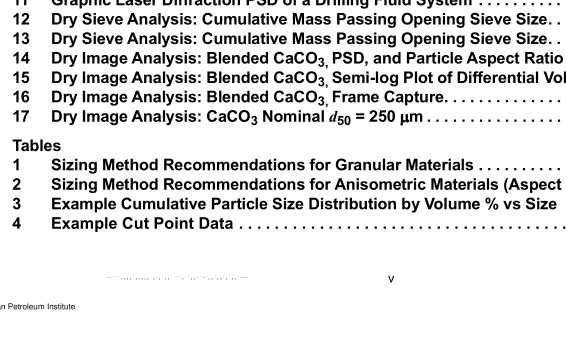 API TR 13TR3-2018 pdf download.Size Measurement of Dry, Granular Drilling Fluid Particulates.
4 Particle Size Distributions (PSD) Particle size distribution in the drilling fluid industry is generally represented by a differential and/or cumulative distribution curve of the mass of material within a given size range. Less common are distributions based on particle count. An incremental, or differential, curve is often generated as a histogram of the mass of particles within a given size window, and is typically plotted semi-logarithmically, i.e. amount of material on the linear ordinate versus the size window (from x µm to (x + k) µm) on the logarithmic abscissa. A cumulative curve is generated from the differential curve by simply adding the amount of material in the sample at each size increment, so that the sum of all material equals 1 00 %. Size parameters such as d 1 0 , d 50 , and d 90 are obtained from the cumulative curve and represent the amount of material less than that size. Thus, for a sample with d 90 = 500 µm, 90 % of the material is of a size less than or equal to 500 µm. For single density (unblended) materials, such as calcium carbonate, the volume PSD is identical to the mass PSD. However, for products comprised of blends, this is only true if the relative density of the individual components of the product are identical, which is uncommon. Most LCMs are pulverized or ground, so their PSDs tend to display log-normal or Weibull probability distribution features, rather than Gaussian (bell curve) features. Furthermore, some grades of an LCM, e.g. calcium carbonate, are blends of other grades of the same material, with the consequence that the PSD curve is multimodal. In these cases, the differential PSD of the blend may have more than one peak. It is not unusual to find blended products that have multimodal size profiles.
5 Sampling To obtain reproducible results with any size measurement technique, it is crucial that the LCM sample submitted for testing be representative of the material that will be used in the field. Procedures described in API 1 3B-1 for sampling from typical commercial containers and at the rig site should be followed. This is particularly true for material with a broad PSD and/or blends of material, since density and/or shape stratification of the particles will tend to occur in the container during transport. It cannot be overemphasized that obtaining a uniform and representative sample of the material to be size-analyzed is the first and most crucial step in accurate PSA.
6 Methods of Sizing Drilling Fluid Particulates 6.1 General Various PSA techniques are available for determining the size distribution of particulates. Because different PSA techniques measure different unique characteristics of the particles, the PSDs that are generated can vary considerably. When selecting an appropriate PSA technique, it is most important to understand how the generated PSD will be used. If the particles under investigation are LCMs, it is crucial to understand that particulate LCMs generally function by flowing into openings in a rock formation and bridging and sealing those openings. Consequently, LCMs tend to align with their smallest dimension parallel to the direction of flow into those cavities, so monitoring the thickness of the particles is necessary. Thus, sieve analysis may be the most appropriate method for determining the PSDs of LCMs, since the sizing process in sieve analysis is thought to simulate (roughly) the transport of LCMs into rock openings. 6.2 PSA Techniques Some PSA techniques that are used or have been seriously considered for drilling fluids or drilling fluid products are the following: Sequential (Dry) Sieving [Sieve Analysis (SA)] This method uses a stack of sequentially finer (mesh) standard sieves, each of which have specified size openings. A sieve is (typically) a woven wire mesh cloth (also known as a screen), having uniform size- controlled openings across the entire surface of the screen. The screen is typically supported on a rigid frame, which allows a defined volume or mass of particulate material to be placed upon the apparatus for the process of separation. Sieves are manufactured in a variety of specific size openings. The defined (reported) opening size (open dimension) is the distance between adjacent (non-intersecting) wires measured parallel to opposite sides of the opening.