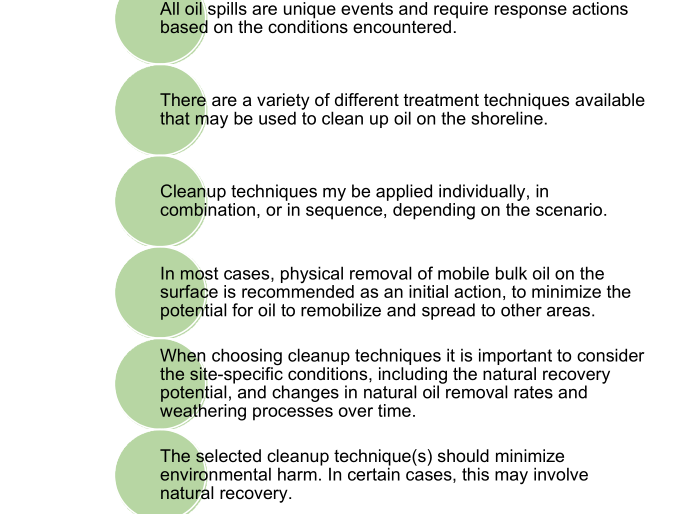 API TR 1155-2-2016 pdf download.Shoreline In Situ Treatment (Sediment Mixing and Relocation) Fact Sheet.
OPA Requirements The formation of OPA requires: ® The presence of oil with polar components · Polar compounds are found in most crudes and fuel oils · Polar compounds are not typically found in highly refined products ® An oil viscosity sufficiently low to allow droplet formation and subsequent aggregation 8 · Low viscosity oil takes seconds to form OPA · Highly viscous oil may require days to form OPA · Extremely viscous and solid oils such as asphalt pavement may not form OPA ® The presence of water with sufficient ionic strength · Readily occurs in both marine and estuarine/brackish environments, where salinity plays a key role in OPA formation · Also occurs in freshwater environments 9 , where calcite and quartz play a role in OPA formation 10 ® The presence of fine mineral or organic particles · Fine particles are naturally present in most of the world’s water bodies · The finer the particle, the larger the surface area, which accelerates OPA formation · The finer the particle, the higher the charge, which increases the attraction to the oil droplets Fate of OPA ® When an OPA is formed, the surface area-to-volume ratio of the oil is increased by orders of magnitude, accelerating and enhancing the weathering processes of evaporation, dissolution, dispersion, and ultimately biodegradation and photo-oxidation. ® The particles within the aggregates act as a surfactant, increasing the stability of the oil droplets, and preventing the oil from re-coalescing into larger droplets or oil slicks. ® Aggregation increases the specific density of the coated droplets, which removes oil from the water surface. However, the aggregates are usually less dense than the particles, and therefore remain in suspension longer and are dispersed farther than un-oiled sediments 11 . ® The ultimate fate of OPA is the biodegradation, or (to a lesser degree) photo-oxidation of the exposed oil at the particle surface, converting the oil to carbon dioxide and water.
• Crude oil spilled during this incident penetrated up to 12 in. into coarse-grained sediments within a sheltered, low energy intertidal zone. Wet mixing when the oiled areas were under water released the oil trapped within the pore spaces of the sediments. A bulldozer with ripper teeth combined with a water jet system was found to be the most effective equipment combination to agitate the beach sediments and release the oil. Liberated oil floated to the water surface, and was recovered using sorbents, skimmers and vacuums. l Estimates of recovered oil over a six week period were of the order of 10,000 L for every 100 m of treated beach.
• Fuel oil stranded on important recreational sand beaches. The objective of the cleanup was to quickly restore the beaches to a pre-spill condition before Labor Day. The sand retained a brown oil stain after mechanical and manual removal of the oiled sediments. Bulldozers and front-end loaders were used to relocate the sediment into the lower intertidal zone. This was successful, depsite low wave-energy conditions at the time, due to the presence of fine particles, and the transport of the cleaned sediment back up the beach occured over a period of only one or two tidal cycles. The No Observed Oil (NOO) endpoints were acheived due to the sediment relocation.