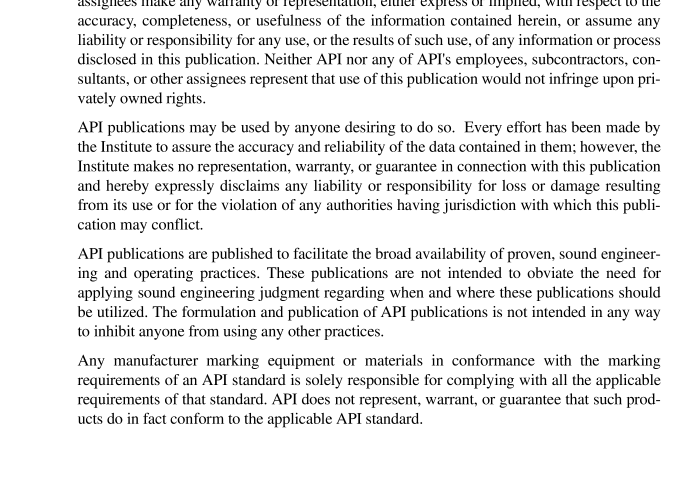 API St 677-2010 pdf download.General-Purpose Gear Units for Petroleum, Chemical and Gas Industry Services.
1 General 1.1 SCOPE 1.1.1 This standard covers the minimum requirements for general-purpose, enclosed single and multistage gear units incorporat- ing parallel shaft helical and right angle spiral bevel gears for the petroleum, chemical, and gas industries. Gears manufactured according to this standard shall be limited to the following pitchline velocities. Helical gears shall not exceed 60 m/s (12,000 ft/ min), and spiral bevels shall not exceed 40 m/s (8,000 ft/min). Spiral bevel gearsets shall be considered matched sets. Note 1: This standard is not intended to apply to gears in special-purpose service, which are covered in API Std 613; to gears integral with other equipment; to epicyclic gear assemblies; or gears with non-involute tooth forms. Note 2: This standard requires the purchaser to specify certain details and features. A bullet (•) at the beginning of a paragraph indicates that either a decision by, or further information from, the purchaser is required. Further information should be shown on the data sheets or stated in the quotation request and purchase order. 1.1.2 General-purpose gears are applied in equipment trains that are usually spared, or are in noncritical service. Typical applications for which this standard is intended are cooling tower water pump systems, forced and induced draft fan sys- tems, and other general-purpose equipment trains. 1.2 ALTERNATIVE DESIGNS The vendor may offer alternative designs. Equivalent metric dimensions, fasteners, and flanges may be substituted as mutually agreed upon by the purchaser and the vendor. 1.3 CONFLICTING REQUIREMENTS In case of conflict between this standard and the inquiry or order, the information included in the order shall govern. 1.4 DEFINITION OF TERMS Terms used in this standard are defined in 1.4.1 through 1.4.26.
1.4.1 axially (horizontally) split: A joint that is parallel to the shaft centerline. 1.4.2 bending stress number (S): Defined in 2.4.4.2. 1.4.3 critical speed: A shaft rotational speed at which the rotor-bearing-support system is in a state of resonance. 1.4.4 design: Requirements normally defined by the equipment designer and the manufacturer. Note: The use of the word design in any term (such as design power, design pressure, design temperature, or design speed) should be avoided in the purchaser’s specifications. 1.4.5 DN: An alphanumeric designation of size for components of a pipework system, which is used for reference purposes. It comprises the letters DN followed by a dimensionless whole number which is indirectly related to the physical size, in millime- ters (mm), of the bore or outside diameter of the end connection. Note 1: The number following the letters DN does not represent a measurable value (ISO 6708: 1995). 1.4.6 gear: Refers to either the pinion or gear wheel. 1.4.7 gear-rated power: The maximum power specified by the purchaser on the data sheets and stamped on the nameplate (see 2.4.1). 1.4.8 gear service factor (SF): The factor that is applied to the tooth pitting index and bending stress number, depending on the characteristics of the driver and the driven equipment, to account for differences in potential overload, shock load, and/or contin- uous oscillatory torque characteristics. 1.4.9 hunting tooth combination: Exists for mating gears when a tooth on the pinion does not repeat contact with a tooth on the gear until it has contacted all the other gear teeth.
1.4.11 maximum allowable speed (in revolutions per minute): The highest speed at which the manufacturer’s design will permit continuous operation. 1.4.12 maximum continuous speed (in revolutions per minute): The speed at least equal to 105% of the rated pinion speed for variable-speed units and is the rated pinion speed for constant-speed units. 1.4.13 minimum allowable speed (in revolutions per minute): The lowest speed at which the manufacturer’s design will permit continuous operation. 1.4.14 nominal pressures (PN): A numerical designation relating to pressure that is a convenient round number for refer- ence purposes. 1.4.15 normal transmitted power: The power at which usual operation is expected and optimum efficiency is desired. The normal transmitted power may be equal to or less than the gear-rated power. 1.4.16 normative: A requirement of the standard. 1.4.17 pinion: The higher speed element of a gear set. 1.4.18 rated input speed of the gear unit (in revolutions per minute): The specified (or nominal) rated speed of its driver, as designated by the purchaser on the data sheets. 1.4.19 rated output speed of the gear unit (in revolutions per minute): The specified (or nominal) rated speed of its driven equipment, as designated by the purchaser on the data sheets. 1.4.20 standby service: A normally idle or idling piece of equipment that is capable of immediate automatic or manual start-up and continuous operation. 1.4.21 thermal capacity: The horsepower a unit will transmit continuously for 3 hours or more without exceeding an operat- ing sump temperature rise of 45°C (80°F) above ambient. 1.4.22 total indicator reading (TIR), also known as total indicated runout: The difference between the maximum and minimum readings of a dial indicator or similar device, monitoring a face or cylindrical surface during one complete revolu- tion of the monitored surface. Note: For a perfectly cylindrical surface, the indicator reading implies an eccentricity equal to half the reading.