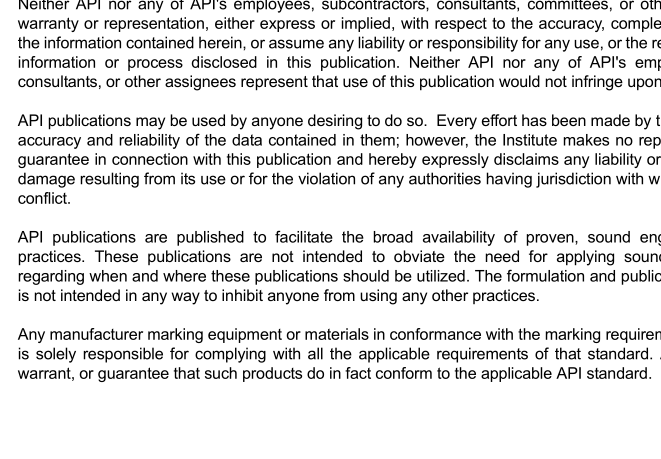 API RP 95J-2006 pdf download.Gulf of Mexico Jackup Operations for Hurricane Season.
1 Scope The purpose of this recommended practice (RP) is to present an approach to siting Jackup Mobile Offshore Drilling Units (MODUs) and to recommend certain operational procedures to enhance jackup survivability and stationkeeping during hurricane season in the Gulf of Mexico during drilling, workover, and while stacked (idled) at a non-sheltered location. This document provides guidance and processes and, when combined with an understanding of the environment at a particular location, the characteristics of the unit being utilized, and other factors, may be used to enhance operational integrity. This RP was developed through a cooperative arrangement with the International Association of Drilling Contractors’ (IADC) Jackup Rig Committee. The information presented herein is premised on the existence of an evacuation plan, the intent of which is to assure timely evacuation of all rig personnel in anticipation of certain climatic conditions. 2 Overview Recent hurricanes in the Gulf of Mexico have caused damage and loss of jackup rigs. However, the industry’s practice of “shut-in and evacuate” has successfully resulted in no loss of life, minimal injuries, and no significant pollution associated with such incidents. Preliminary analysis of the damage and losses indicates the likely causes to be wave inundation and/or foundation failure leading to wave inundation. Additionally, the preliminary results of investigations of surviving jackups that experienced forces in excess of design criteria validate the premise that structural assessment methodologies tend to be conservative. Rig survival is a function of the environmental conditions (water depth, wind loading, wave heights, current, foundation, etc.) at the location. Based on the studies conducted to date, recommended practices contained in this document include, but are not limited to, site optimization (data), preloading procedures, air gap analysis, storm preparation, and post-storm recovery enhancements.
Historically, mat supported jackups have responded differently to wave impingement than independent leg units. Generally, these units have not experienced catastrophic failure. Rather, they have tended to slide for limited distances along the seabed during repeated wave impingement. Accordingly, only certain elements of this RP, such as the optimization recommendations set forth in Section 4, storm preparation, and setting an air gap for storm survival (see Section 6) may apply to such units. Several recommended methods of assessment and analysis are contained in this RP. This RP should not be viewed as an endorsement of a particular methodology or product. Other scientifically valid methods are options that may also be considered. 3 Terms and Definitions 3.1 air gap The distance from the lowest astronomical tide (LAT) to the underside of the hull. 3.2 API American Petroleum Institute 3.3 drilling contractor The individual, partnership, firm, or corporation retained by the owner or operator to perform drilling and/or well workover operations.
3.4 evacuation period The period of time from the commencement of storm preparations until all evacuated personnel have obtained reasonable refuge ashore (generally 12 hours after arriving shore-side). 3.5 flag state The government of the nation whose flag a vessel is entitled to fly. 3.6 hurricane A severe tropical cyclone having one minute average 33 ft elevation winds in excess of 64 knots (74 mph). 3.7 hurricane season The portion of the year having relatively high incidence of hurricanes. In the Atlantic, Caribbean and Gulf of Mexico, and for the purposes of this RP, it is the time period between June 1 and November 30. 3.8 IADC International Association of Drilling Contractors 3.9 independent leg jackup Jackup unit with legs that can be raised or lowered independently. 3.10 jackup A mobile offshore unit with a buoyant hull and one or more legs that can be moved up or down relative to the hull. A jackup reaches its operational mode by lowering the leg(s) to the sea floor and then raising the hull to the required elevation. The majority of jackups have three (3) or more legs, each of which may be move independently, and which are supported on the sea floor by spudcans or a mat. 3.11 lowest astronomical tide (LAT) The lowest level expected to occur under average meteorological conditions and any combination of astronomical conditions.