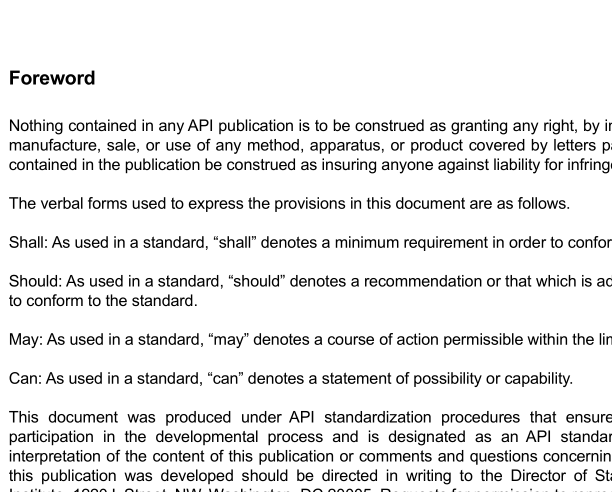 API RP 939-C-2019 pdf download.Guidelines for Avoiding Sulfidation (Sulfidic) Corrosion Failures in Oil Refineries.
3.1.1 common corrosion system and circuits Typically, the piping and equipment that is organized into corrosion systems, sometimes referred to as loops, that have similar expected damage mechanisms. A system may be the overhead system of a tower. A circuit is a subset of a system, and the term “common corrosion circuit” indicates that corrosion rates and other damage would be expected to have similar likelihood and would have similar process conditions. 3.1.2 hydrogen free H 2 free Processes where H 2 is not intentionally added. There may be trace amounts of H 2 present but are in services such as crude/vacuum units, fluidized catalytic cracking (FCC), cokers, etc. 3.1.3 integrity operating window IOW Established limits for process variables (parameters) that can affect the integrity of the equipment if the process operation deviates from the established limits for a predetermined amount of time. This documentation describes limits related to unit- and equipment-specific process parameters for the given materials of construction. Operation within the limits should not adversely affect the mechanical integrity of the equipment and piping. An IOW can also define process monitoring tasks to ensure that operating conditions are maintained within the established parameters. NOTE Guidance on setting and using IOWs is given in API 584. 3.1.4 killed steel Steel that has been completely deoxidized by the addition of an agent, such as Si or aluminum (or other methods such as vacuum treatment), before casting, so that there is practically no evolution of gas during solidification. Killed steels are characterized by a high degree of chemical homogeneity and freedom from porosity. 3.1.5 low-alloy (Cr-Mo) steels Steels that contain 1 % to 9 % chromium (Cr) and 0.5 % to 1 % Mo (molybdenum). 3.1.6 low-silicon (Si) carbon steels Carbon steels that contain less than 0.1 0 weight (wt) % Si.
4 Basics of Sulfidation Corrosion Sulfidation corrosion, also often referred to as “sulfidic corrosion,” is not a new phenomenon but was first observed in the late 1 800s in a pipe still (crude separation) unit, due to the naturally occurring sulfur-containing organic compounds found in crude oil. When heated for separation, the various fractions separated from the crude were found to cause corrosion of the steel equipment as a result of reaction with the sulfur-containing compounds. With the advent of FCC and coking processes, sulfidation corrosion was also experienced in these units [1 ] [2] . When hydroprocessing was introduced in the 1 950s, changes in the corrosion behavior of construction materials were noted. This led to the recognition that a different sulfidation corrosion behavior resulted under hydroprocessing conditions that typically involve the presence of H 2 . Empirical industry data as well as laboratory research indicate that the sulfidation corrosion rate is a function of a variety of factors, including temperature, the total sulfur concentration, the types of sulfur-containing compounds present, the type of process stream (e.g. light gas or heavy oil), the velocity, heat transfer conditions, the presence or absence of H 2 , and the material of construction. In the absence of H 2 , corrosion due to sulfur-containing compounds typically is thought to occur at temperatures above 500 °F (260 °C). As discussed below, a set of curves called the “modified McConomy curves” [3] can be used to help predict corrosion rates in the absence of H 2 . These curves show that at a given temperature and total sulfur level, steels with increasing Cr content [from carbon steel to 5Cr-0.5Mo to 9Cr-1 Mo to stainless steel (SS)] will experience lower corrosion rates. In the presence of H 2 , i.e. H 2 /H 2 S corrosion, corrosion rate starts to increase above about 450 °F (230 °C). A different set of curves, known as “the Couper-Gorman curves,” [4] can be used to help predict the corrosion rate in this environment. These curves relate the amount of H 2 S present with temperature to estimate the corrosion rate. While in H 2 -free sulfidation, 5Cr-0.5Mo and 9Cr-1 Mo have useful resistance, in H 2 /H 2 S sulfidation, there is little improvement in alloy performance until the Cr level reaches 1 2 wt %. In addition, materials such as 1 8Cr-8Ni stainless achieve a significant improvement in corrosion resistance over and above 1 2Cr wt % SS. Each crude oil or crude blend has its own characteristic chemistry, sulfur-containing organic compounds, and effect on sulfidation corrosion. Despite the industry’s best efforts, the accurate prediction of the resulting H 2 -free sulfidation corrosion rate for a specific crude oil and its fractions is an elusive technical challenge. Oil refineries that processed a consistent diet of a particular crude oil or crude blend could often base future predictions on past experience. However, over the past 20+ years, global economics have resulted in many refineries processing tens of different crudes in any given year, thus minimizing the accuracy, or even feasibility, of predictions based on historical data. Additionally, the verification of the actual sulfidation corrosion rate experienced while processing a specific crude oil is very difficult. In both H 2 -free sulfidation and H 2 /H 2 S corrosion, the metal surface will form sulfide scales. These metal sulfide scales tend to slow down the sulfidation corrosion rate, since their formation tends to protect the underlying metal surface. In plain carbon steel, these will be iron sulfides, and in Cr-Mo steels, these will be chromium- iron sulfides. The Cr-based sulfides are more robust and protective than the plain iron sulfides, and the Cr sulfides will maintain their protection to higher temperatures and fluid velocities than iron sulfides.