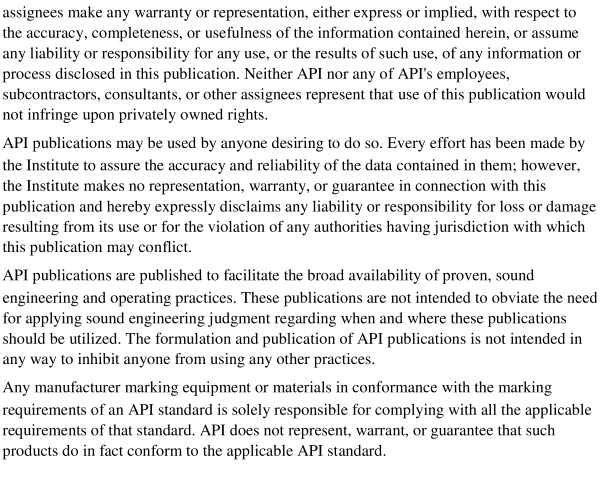 API RP 86-2005 pdf download.API Recommended Practice for Measurement of Multiphase Flow.
1.1 USE WITH OTHER RECOMMENDED PRACTICES It is intended that this RP be used in conjunction with other similar documents to guide the user toward good measurement practice in upstream hydrocarbon production applications. The term upstream refers to those measurement points prior to, but not including, the custody transfer point. Specifically this document will address in depth the question of how the user measures (multiphase) flow rates of oil, gas, water, and any other fluids that are present in the effluent stream of a single well. This requires the definition not only of the methodology which is to be employed, but also the provision of evidence that this methodology will produce a quality measurement in the intended environment. Most often, this evidence will take the form of a statement of the uncertainty of the measurement, emphasizing how the uncertainty statement was derived. This RP will prove especially important when used in conjunction with other similar documents, such as those that address how commingled fluids should be allocated to individual producers. For example API RP 85 Use of Subsea Wet-Gas Flowmeters in Allocation Measurement Systems [Ref. 2] describes a methodology for allocation based on relative uncertainty, the identification of which is discussed in detail in section 8. 1.2. MULTIPHASE FLOW CLASSIFICATIONS For the purposes of this document, the measurement of multiphase flow must address all possible conditions likely to be encountered in the production of oil and gas. Since it is impossible to prescriptively write a RP that addresses all possible conditions that might be encountered in actual practice, this will not be attempted here. However, there are no conditions of the multiphase environment found in typical hydrocarbon production that are specifically excluded here. Conditions of individual phase flow rates, pressures, temperatures, densities, up- and downstream conditions, pipe orientation, or other parameters can and will be considered.
1.4 Other Relevant Work API RP 85 was published in 2003. While the subject it addressed was different from that considered here, there is sufficient overlap in these two subjects that some topics are common to both. For example, much effort in the creation of RP 85 was expended in the area of calibration and verification of wet-gas meters. Although the methodologies of measurement and the multiphase flow regimes that are considered here are broader than those used in RP 85, it is clear that much of the material which was developed for RP 85 can be used largely without alteration in this Recommended Practice. Likewise the Norwegian Handbook of Multiphase Metering [Ref. 3], published by the Norwegian Society for Oil and Gas Measurement (NFOGM), is a rich source of material which has recently been revised. With permission of the NFOGM, material from this document has been incorporated into this RP. Some sections from the Guidance Notes for Petroleum Measurement [Ref. 4] which is published by the UK Department of Trade and Industry (DTI) have been included, particularly in section 8 on Uncertainty in Measurement. Parts of a White Paper developed by the API Committee on Petroleum Measurement (COPM) (API Publication 2566, State of the Art Multiphase Flow Metering) has been used in detailing what a Factory Acceptance Test (FAT) consists of [Ref. 5]. Finally, some sections have been appropriated from an unpublished draft of a forthcoming ASME paper on wet-gas metering [Ref. 11]. 2 1. 2. 3. 4. 5. 6. 7. 8. 9. Referenced Publications American Petroleum Institute (API), Manual of Petroleum Measurement Standards (MPMS). American Petroleum Institute (API), Recommended Practice 85 Use of Subsea Wet-Gas Flowmeters in Allocation Measurement Systems. Norwegian Society for Oil and Gas Measurement, (Norsk Foreing for Olje og Gassmåling), NFOGM, Handbook of Multiphase Flow Metering, currently under revision, expected publication date Q2/2005.