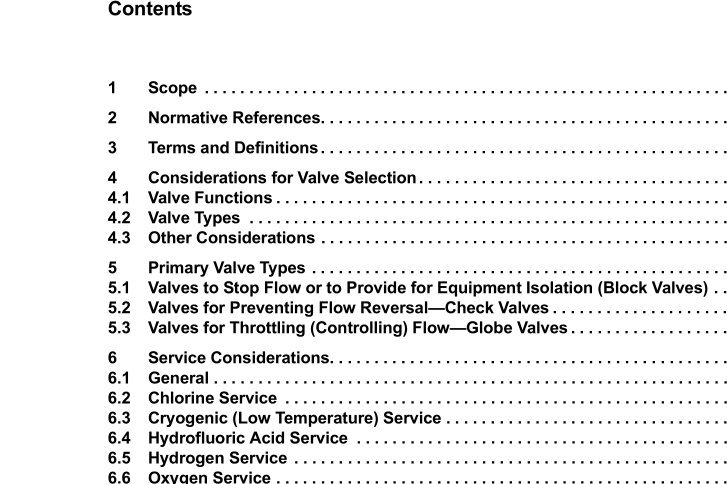 API RP 615-2010 pdf download.Valve Selection Guide.
3 Terms and Definitions For the purposes of this document the following definitions apply. 3.1 abrasive service Abrasive service is a term used to identify fluids containing abrasive particulate in piping systems including pipe rust, scale, welding slag, sand, catalyst fines, grit and hydrocarbon particles such as coke. 3.2 bellows stem seal A flexible metal bellows is used in addition to valve stem packing to provide a positive seal against leakage past the stem packing. 3.3 chlorine service Services containing liquid or vapor chlorine in concentrations higher than 1 ppm (OSHA PEL). This does not include water services containing chlorine for pH balancing or as a biocide. 3.4 clean service Clean service is a term used to identify fluids free from solids or contaminants. Clean fluids include most light hydrocarbons, instrument air, nitrogen, water, steam, lube oil, diesel oil, methanol, etc. 3.5 closure member This refers to the component in the valve that serves to stop flow (gate, ball, and plug, for example). Known as the obturator in some international valve standards. 3.6 cryogenic (low temperature) service Cryogenic service is generally defined in the process industry as services that are lower than minus 101 °C (minus 150 °F). These services, which are comparatively clean, include LNG liquefaction and gasification, NGL production, ethylene production, etc.
3.7 dirty service Dirty service is a general term used to identify fluids with suspended solids that may seriously impair the performance of valves unless the correct valve type and trim are selected. 3.8 double block and bleed (DB&B) valves A bleed valve is located in the body to vent the cavity between the seats. Venting the cavity will help to reduce the pressure acting on the downstream seat, which will help minimize any leakage. 3.9 fouling/scaling service Fouling or scaling services are general terms used to identify liquids or elements of liquids that form a deposit on surfaces. Such deposits may vary widely in nature, with varying hardness, strength of adhesion and rates of build up. 3.10 fugitive emissions Leakage of volatile organic compounds (VOCs) typically from valve stem seals and gasketed joints. 3.11 hardfacing Hardfacing refers to the use of a high-hardness material such as Co-Cr A applied to the seating surfaces of valves to provide for longer life and improved resistance to galling of the contacting parts. 3.12 high temperature service High temperature service, as it relates to valves, is typically defined as a service with temperature higher than 400 °C (750 °F). 3.13 hydrogen service Services containing hydrogen at partial pressure with a temperature above the carbon steel curve in API 941. 3.14 hydrofluoric acid (HFA) service Service involving the use of the toxic hydrofluoric (HF) acid . This acid in the presence of water and carbon steel forms a scale (iron fluoride) that can block pipes and valve cavities and adhere to the metallic sealing surfaces of valve gates and seats. 3.15 non-Newtonian fluid A non-Newtonian fluid is a fluid whose flow properties are not described by a single constant value of viscosity. For a non-Newtonian fluid, the relation between the shear stress and the strain rate (viscosity) is nonlinear, and can even be time-dependent.
3.20 slurry service Slurry service is a general term used to define liquids with substantial solids in suspension. Often the solid is the product and the fluid is primarily the means of transportation, e.g. coal slurries and catalyst services. 3.21 stress cracking Material failure resulting from exposure to aggressive environments, such as sour or wet H 2 S exposure, chlorides, hydrogen, and amines, for example. 3.22 sour (wet H 2 S) service Wet H 2 S service is defined as having greater than ≥ 50 wppm of H 2 S in a water phase (determined by using the total amount of sulfide in the water phase) or ≥ 0.05 psia H 2 S partial pressure in the gas phase with liquid water present. 3.23 utility service Generally considered to include air, water, nitrogen, and steam not exceeding Class 150. 3.24 viscous service Viscous service is a term that generally identifies a wide range of fluids with pronounced thickness and adhesive properties. Fluids include high viscosity oils (lube and heavy fuel oil) and non-Newtonian fluids such as waxy crude, gels and pastes.