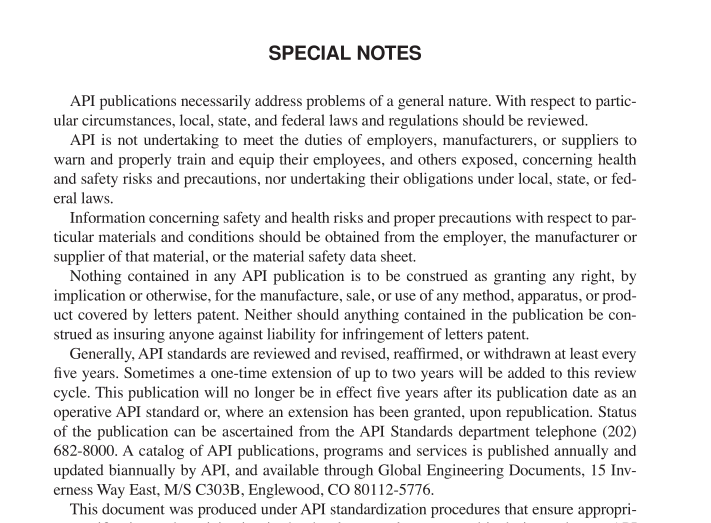 API RP 2214-2004 pdf download.Spark Ignition Properties of Hand Tools.
1 General 1.1 SCOPE This publication emphasizes that the use of nonferrous hand tools, sometimes referred to as nonsparking tools, is not war- ranted as a Þre prevention measure in petroleum operations. 1.2 BACKGROUND As early as 1930, Þre protection engineers in the petroleum industry questioned the justiÞcation for recommending the use of special nonferrous tools instead of ordinary steel tools in petroleum operations. These engineers pointed out that although numerous opportunities existed for the production of sparks from violent contact of steel objects with other steel objects, there was a negligible record of Þres resulting from such a cause. It was therefore illogical to attribute a special hazard designation to steel hand tools. A paper presented at the Group Session on Fire Protection at the Annual Meeting of the American Petroleum Institute in 1941 described a series of tests conducted about 15 years ear- lier. The paper reported that sparks produced by contact of steel with steel, steel with an abrasive wheel, or even steel with power-driven equipment were unlikely to ignite petro- leum vapors. 1 The nature of sparks was discussed, and it was shown that any material harder than steel (even nonsparking material) could produce sparks upon striking steel. The authors concluded that insistence on the use of special non- sparking tools fostered a false sense of security to the detri- ment of other, more important Þre prevention measures. They also concluded that blanket rules covering the use of such tools were unwise and against the best interests of the petro- leum industry.

2.2 SPARKS FROM HAND TOOLS The API Committee on Accident Prevention and Fire Pro- tection reviewed the situation and proposed the preparation of ÒSparks From Hand ToolsÓ 2 , which was approved for publi- cation by the Safety Committee of APIÕs Board of Directors on February 3, 1956. The conclusion of this publication read: Based on experimental evidence and ample practical expe- rience, it has been concluded that in petroleum operations no significant increase in fire safety will result from the use of nonsparking hand tools in lieu of ordinary tools made of steel. About a year later, the U.S. Department of Commerce, OfÞce of Technical Services, issued ÒSparking Characteris- tics and Safety Hazards of Metallic MaterialsÓ. 3 A review of the literature and some experimental work led to the follow- ing conclusion: No benefit is gained by the use of low sparking materials in place of steel in hand tools to prevent ignitions. 2.3 OTHER INVESTIGATIONS Petroleum industry interest in the role of friction sparks in the occurrence of accidental Þres was paralleled by concern in the coal mining industry, since many mine Þres had been attributed to sparks produced by power-driven coal mining equipment. In 1955, the U.S. Bureau of Mines published ÒFrictional Ignition of Gas by Mining Machines,Ó 4 which recounted Þre experiences in U.S. and various European coal mining areas. This paper discussed investigations which demonstrated that ignitions were possible with certain combinations of materi- als and forms of abrasion and impact. It suggested 23 reme- dial measures, none of which involved a restriction on the material used for hand tools.2.4 CONCLUSION Nothing essentially new has been learned since the publi- cation of ÒSparks from Hand ToolsÓ in 1956. Recent publica- tions such as NFPAÕs Fire Protection Handbook 7 reach the same conclusions reported 40 years prior. Sparks produced by violent contact between some substances and others, including some of the metals ordinarily termed Ònonspark- ing,Ó can, in fact, ignite gases or vapors if sufÞcient energy is dissipated in the impact. However, such conditions are far removed from the actual conditions under which hand tools are used. The Þre records of companies that have never used or have ceased to use nonsparking tools amply conÞrm the position taken by the Safety Committee of APIÕs Board of Directors in 1956: The Institute’s position is that the use of special nonfer- rous hand tools, sometimes referred to as nonsparking tools, is not warranted as a fire-prevention measure applica- ble to petroleum operations.