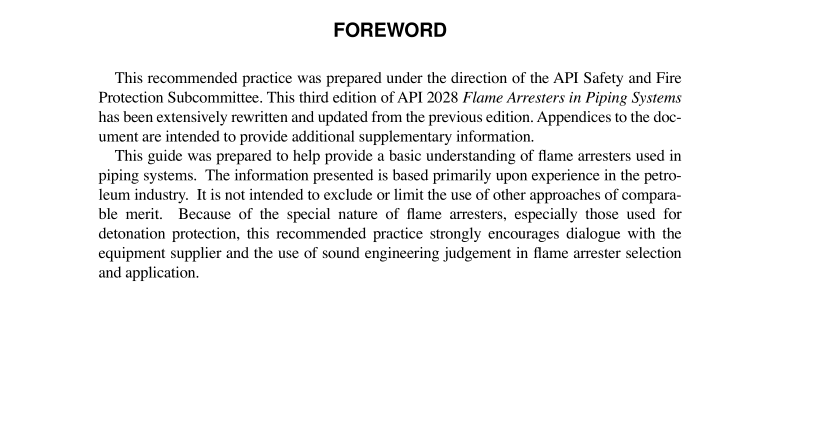 API RP 2028-2010 pdf download.Flame Arresters in Piping Systems.
3.1 autoignition temperature: The minimum tempera- ture at which a material will ignite with self-sustained combus- tion without an external source of ignition (such as a spark or ßame). 3.2 deflagration: A combustion wave that propagates subsonically (as measured at the pressure and temperature of the ßame front) by the transfer of heat and active chemical species to the unburned gas ahead of the ßame front. 3.3 detonation: A reaction in a combustion wave propa- gating at sonic or supersonic velocity (as measured at the pres- sure and temperature of the ßame front). A detonation is stable when it has a velocity equal to the speed of sound in the burnt gas or may be unstable (overdriven) with a higher velocity and pressure.
3.4 explosion: A rapid release of energy (such as burn- ing) which produces a pressure wave. 3.5 hazard: An inherent chemical or physical property with the potential to do harm (ßammability, toxicity, corrosiv- ity, stored chemical or mechanical energy). 3.6 inerted: (For vessels under U.S. Coast Guard regula- tions.) Means the oxygen content of the vapor space in a tank vesselÕs cargo tank is reduced to 8% by volume or less, in accordance with the inert gas requirements of 46 CFR 32.53 or 46 CFR 153.500. 3.7 maximum experimental safe gap (MESG): The MESG is the maximum clearance between two parallel metal surfaces that has been found, under speciÞed test conditions, to prevent an explosion in a test chamber from being propa- gated to a secondary chamber containing the same gas or vapor at the same concentration. The MESG factor was developed for designing electrical equipment for use in haz- ardous atmospheres. 3.8 pyrophoric: Iron sulÞde or carbonaceous materials which, when exposed to air, can oxidize and heat, providing a source of ignition if a ßammable vapor/air mixture is present. 3.9 risk: The probability of exposure to a hazard which could result in harm to personnel, property, the environment or the general public.
4.1 GENERAL This discussion of the combustion of gases or vapors emphasizes combustion phenomena in piping. This back- ground focuses on understanding the functioning and poten- tial problems when ßame arresters are used in piping systems. A ßame arrester may not function or provide the desired pro- tection if it has not been designed for (or tested at) conditions appropriate for the process in which it is to be installed (pres- sure, temperature, and fuel type). For combustion to occur, the gas or vapor must be mixed with an oxidizer and must be within the ßammable limits for the mixture. Typically, the oxidizer is the oxygen contained in air. Combustion within piping can occur even if the amount of oxygen within the piping is signiÞcantly below the normal 20.8% concentration of oxygen in air. It is a typical reÞnery and chemical plant safe operating practice to maintain process piping at or below an oxygen concentration of 5%. The United States Coast Guard (USCG) regulations for marine transfer vapor collection systems specify that when analyzers are required to be used, the process shall be shut down if the oxy- gen concentration increases to 8% or greater. As pressures increase, the level of oxygen required to have a combustible mixture decreases. And, as the temperature of a ßammable gas- eous mixture is increased, the ßammable limits increase or widen. So, at elevated temperatures and pressures, a combus- tion reaction will be initiated more easily, and the reaction will proceed faster.