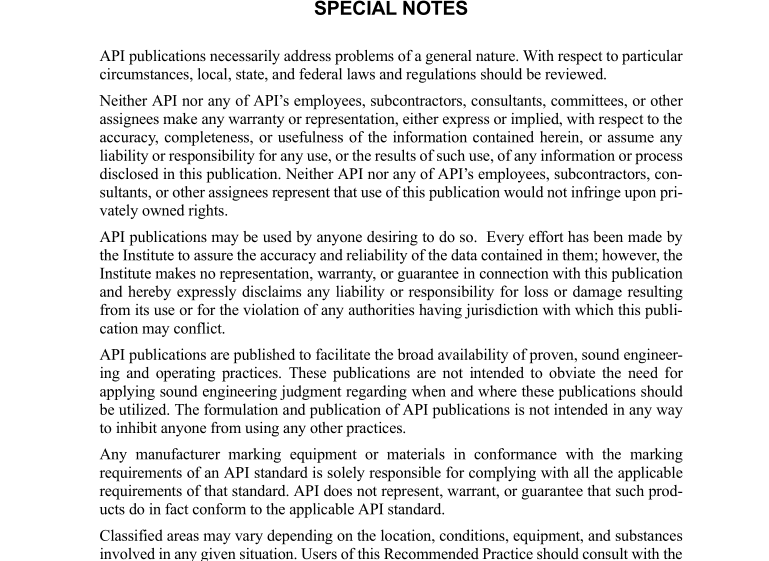 API RP 19B-2006 pdf download.Recommended Practices for Evaluation of Well Perforators.
0 Scope 0.1 GENERAL This Recommended Practice describes standard procedures for evaluating the performance of perforating equipment so that representations of this performance may be made to the industry under a standard practice. This document supersedes all previously issued editions of API RP 43. Sections 1 – 4 of this Recommended Practice provides means for evaluating perforating systems (multiple shot) in 4 ways: 1. Performance under ambient temperature and atmospheric pressure test conditions. 2. Performance in stressed Berea sandstone targets (simulated wellbore pressure test conditions). 3. How performance may be changed after exposure to elevated temperature conditions. 4. Flow performance of a perforation under specific stressed test conditions. Section 5 of this Recommended Practice provides a procedure to quantify the amount of debris that comes out of a perforating gun during detonation. The purpose of this Recommended Practice is to specify the materials and methods used to evaluate objectively the performance of perforating systems or perforators. 0.2 IMPLEMENTATION These procedures become effective as of the date of publication. 0.3 API REGISTERED PERFORATOR SYSTEMS Information on API Registration of perforator systems can be found in Appendix A. 0.4 REPORTS AND ADVERTISEMENTS Reports, articles, papers, periodicals, advertisements, or similar publications which refer to results from tests conducted according to API RP 19B must not be worded in a fashion to denote that the American Petroleum Institute either endorses the result cited or recommends or disapproves the use of the perforating system described. Use of data obtained under API RP 19B tests in reports, articles, papers, periodicals, advertisements, or other published material shall include, as a minimum, all test configuration data not specified by API RP 19B or left to the verifying company’s choosing by API RP 19B and the average measured results of the test.
1.2.1 Target Preparation Concrete for the target and test briquettes shall be mixed using a cement-sand-slurry consisting of the following: a. 1 part or 94 lb of API Class A or ASTM Type I cement. b. 2 parts or 188 lb ±1% of dry sand. (The sand shall meet API RP 56, Second Edition requirements for 16 – 30 frac sand. The sand shall be stored in a dry location prior to use.) c. 0.52 part or 49 lb ±1% of potable water. d. The ratio of sand to cement shall be between 2.02 and 1.98. The ratio of water to cement shall be between 0.5252 and 0.5148. 1.2.2 Required Documentation Each distinct quantity of concrete (truckload or similar) used in the preparation of a target must include a written report from the concrete supplier listing the actual amounts of cement, sand, and water used. Quantities shall be reported in the units utilized during the measuring process, with no conversions or adjustments. The testing company shall maintain supporting documentation that the sand complies with API RP 56 for 16 – 30 frac sand. At a minimum, this shall consist of sieve analysis data for all loads of frac sand received by the concrete supplier. The testing company shall maintain supporting documentation that the casing used in the construction of the target meets the reported grade and weight. 1.2.3 Target Configuration The shape of the outer target form shall be circular and the size determined by the shot pattern and anticipated penetrating capability of the perforating system to be tested. Positioning of the tubing or casing within the target shall be determined by the gun phasing used in the test. For zero-phased perforators, the casing or tubing shall be set in the target form such that a minimum of three inches of the specified concrete composition surrounds the tubing or casing in all directions.