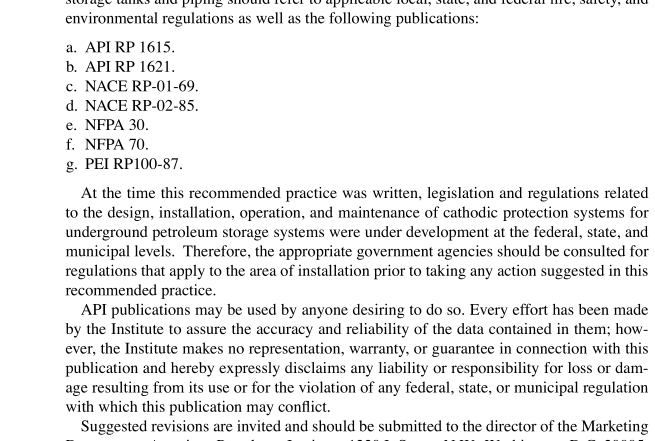 API RP 1632-2010 pdf download.Cathodic Protection of Underground Petroleum Storage Tanks and Piping Systems.
1.1 Scope This recommended practice covers two methods of pro- viding cathodic protection for buried steel petroleum stor- age and dispensing systems. Its intent is to provide information speciÞc to buried steel structures such as motor fuel storage tanks and delivery piping, waste oil tanks, heat- ing-oil tanks, and automobile lifts installed at service sta- tions. Information presented for service stations is not necessarily applicable to buried tanks and piping used for other purposes. This recommended practice is intended to serve only as a general guide to marketers, architects, and engineers interested in cathodic protection of underground petroleum storage and dispensing systems. SpeciÞc cathodic protection designs are not provided. Such designs should be developed or adapted by a qualiÞed corrosion engineer or a person thoroughly familiar with cathodic protection practices. 1.2 Referenced Publications The editions of the following documents that are in effect at the time of publication of this recommended practice are cited herein:
API RP 1615 Installation of Underground Petroleum Storage Systems RP 1621 Bulk Liquid Stock Control at Retail Outlets NACE 1 RP-01-69 Control of External Corrosion on Underground or Submerged Metallic Piping Systems RP-02-85 Control of External Corrosion on Metallic Buried, Partially Buried, or Submerged Liquid Storage Systems NFPA 2 30 Flammable and Combustible Liquids Code 70 National Electrical Code PEI 3 RP100-87 Recommended Practices for the Installation of Underground Liquid Storage System s
2.1 Introduction Corrosion may be deÞned as the deterioration of metal due to a reaction with its environment. External corrosion of buried steel structures is an electrochemical process. For the process to occur, areas with different electrical potentials must exist on the metal surface. These areas must be electri- cally connected and in contact with an electrolyte. There are, therefore, four components in each electrochemical cor- rosion cell: an anode, a cathode, a metallic path connecting the anode and cathode, and an electrolyte (see Figure 1). The role of each component in the corrosion process is as follows: a. At the anode, the base metal goes into solution (corrodes) by releasing electrons and forming positive metal ions. b. No metal loss occurs at the cathode. However, other chemical reactions occur that consume the electrons released at the anode. c. Positive current ßows through the metal path connecting the cathode and anode. Electrons generated by the chemical corrosion reactions at the anode are conducted through the metal to the cathode where they are consumed.
2.2.1.2 Both metal composition and environmental fac- tors may determine which areas on a metal surface become anodes or cathodes. Steel is an inherently nonhomogeneous material, and for a particular environment, potential differ- ences between adjacent areas can result from uneven distri- bution of alloying elements or contaminants within the metal structure. Differences between the weld material and the steel plate can also cause corrosion cells in welded structures. 2.2.1.3 Physical and chemical properties of the soil (elec- trolyte) may also inßuence the location of anodic and cathodic areas on the metal surface. For example, differing oxygen concentrations at different areas on a buried steel structure may generate potential differences. Areas with lower oxygen concentrations become anodic areas, and areas with higher oxygen concentrations become cathodic areas. This may result in more severe corrosion attack at the bottom of a buried tank than at the top of the tank since oxy- gen concentration in soil is primarily dependent on diffusion from the soil surface (see Figure 2). The same mechanism can also contribute to corrosion in areas where clay or debris contact a steel tank buried in a sand backÞll, or where a tank is buried in two different types of soil (see Figure 3). 2.2.1.4 Soil characteristics substantially affect the type and rate of corrosion occurring on buried structures. For example, dissolved salts inßuence the current-carrying capacity of the soil electrolyte and help determine reaction rates at anode and cathode areas. Soil moisture content, pH (a measure of acidity), and the presence of sulÞdes also inßu- ence corrosion. These factors, and perhaps others, interact in a complex fashion to inßuence corrosion at each location.