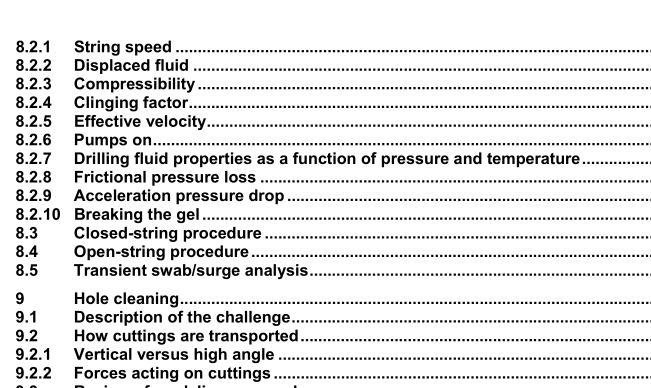 API RP 13D-2010 pdf download.Rheology and Hydraulics of Oil-well Fluids.
4.1.2 In axial laminar flow, the fluid moves parallel to the walls of the flow channel in smooth lines. Flow tends to be laminar when moving slowly or when the fluid is viscous. In laminar flow, the pressure required to move the fluid increases with increases in the velocity and viscosity. 4.1.3 In turbulent flow, the fluid is swirling and eddying as it moves along the flow channel, even though the bulk of the fluid moves forward. These velocity fluctuations arise spontaneously. Wall roughness or changes in flow direction will increase the amount of turbulence. Flow tends to be turbulent with higher velocities or when the fluid has low viscosity. In turbulent flow, the pressure required to move the fluid increases linearly with density and approximately with the square of the velocity. This means more pump pressure is required to move a fluid in turbulent flow than in laminar flow. 4.1.4 The transition from axial laminar and turbulent flow is controlled by the relative importance of viscous forces and inertial forces in the flow. In laminar flow, the viscous forces dominate, while in turbulent flow the inertial forces are more important. For Newtonian fluids, viscous forces vary linearly with the flow rate, while the inertial forces vary as the square of the flow rate.
4.2.2 Viscosity is not a constant value for most drilling fluids. It varies with shear rate. To check for rate dependent effects, shear stress measurements are made at a number of shear rates. From these measured data, rheological parameters can be calculated or can be plotted as viscosity versus shear rate. 4.2.3 The term effective viscosity is used to describe the viscosity either measured or calculated at the shear rate corresponding to existing flow conditions in the wellbore or drillpipe. This special term is used to differentiate the viscosity as discussed in this section from other viscosity terms. To be meaningful, a viscosity measurement must always specify the shear rate. 4.3 Shear stress 4.3.1 Shear stress is the force required to sustain a particular rate of fluid flow and is measured as a force per unit area. Suppose, in the parallel-plate example (see Figure 1), that a force of 1.0 dyne is applied to each square centimeter of the top plate to keep it moving. Then the shear stress would be 1.0 dyne/cm 2 . The same force in the opposite direction is needed on the bottom plate to keep it from moving. The same shear stress of 1.0 dyne/cm 2 is found at any level in the fluid.
4.4 Shear rate 4.4.1 Shear rate is a velocity gradient measured across the diameter of a pipe or annulus. It is the rate at which one layer of fluid is moving past another layer. As an example, consider two large flat plates parallel to each other and one centimeter (cm) apart. The space between the plates is filled with fluid. If the bottom plate is fixed while the top plate slides parallel to it at a constant velocity of 1 cm/s, the velocities indicated in Figure 1 are found within the fluid. The fluid layer near the bottom plate is motionless while the fluid layer near the top plate is moving at almost 1 cm/s. Halfway between the plates the fluid velocity is the average 0.5 cm/s. 4.4.2 The velocity gradient is the rate of change of velocity Δ V with distance from the wall h. For the simple case of Figure 1, the shear rate is dV /h and will have units of 1/time. The reciprocal second, or often called the inverse second, (1/s or s -1 ) is the standard unit of shear rate. 4.4.3 This reference example applies for Newtonian fluids, where the shear rate is constant throughout the fluids. This situation is not the case with a circulating fluid. In laminar flow inside a pipe, for example, the shear rate is highest next to the pipe wall. An average shear rate may be used for calculations, but the shear rate itself is not constant across the flow channel.