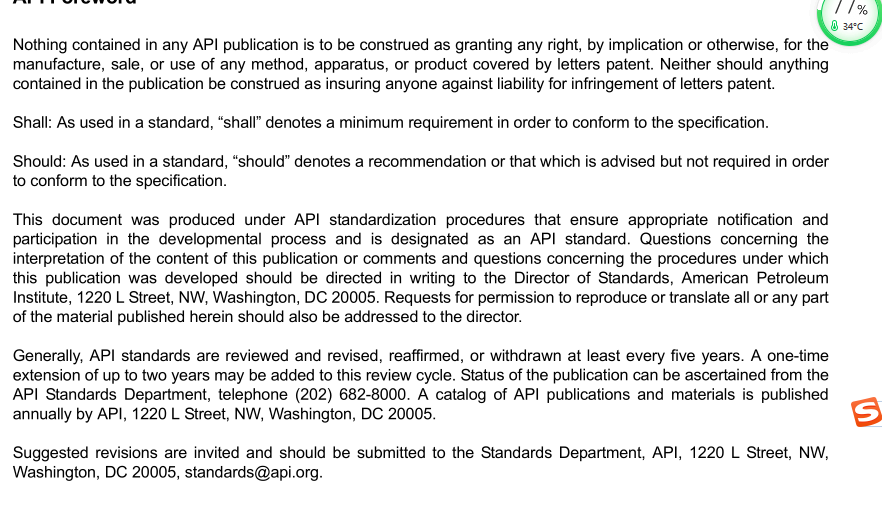 API RP 13C-2010 pdf download.Recommended Practice on Drilling Fluids Processing Systems Evaluation.
3.1.3 aperture 〈screen cloth〉 opening between the wires in a screen cloth 3.1.4 aperture 〈screen surface〉 opening in a screen surface 3.1.5 apex opening at lower end of a hydrocyclone 3.1.6 API sand 〈physical description〉 particles in a drilling fluid that are too large to pass through a 74 μm sieve (API 200 screen) NOTE 1 Its amount is expressed as a volume fraction (percent) of drilling fluid. NOTE 2 Particle size is a descriptive term; the particles can be shale, limestone, wood, gold or any other material. 3.1.7 API screen number mesh, obsolete mesh count, obsolete number in an API system used to designate the D100 separation range of a mesh screen cloth cf. D100 separation (3.1.23) NOTE 1 The term mesh was formerly used to refer to the number of openings (and fraction thereof) per linear inch in a screen, counted in both directions from the centre of a wire. This term is being replaced by the API screen number. NOTE 2 Mesh count was formerly used to describe the fineness of a square or rectangular mesh screen cloth. For example, a mesh count such as 30 × 30 or often 30 mesh indicates a square mesh, while a designation such as 70 x 30 mesh indicates rectangular mesh. This term is being replaced by the API screen number. NOTE See 9.6 for further information. 3.1.8 backing plate support plate attached to the back of screen cloth(s) 3.1.9 baffle plate or obstruction built into a compartment to change the direction of fluid flow 3.1.10 barite baryte natural barium sulfate (BaSO 4 ) used for increasing the density of drilling fluids NOTE International Standards require a minimum specific gravity of 4,20 for barite, but do not specify that the material must be barium sulfate. Commercial ISO 13500 barite can be produced from a single ore or a blend of ores, and can be a straight-mined product or processed by flotation methods. It can contain accessory minerals other than barium sulfate (BaSO 4 ). Because of mineral impurities, commercial barite can vary in colour from off-whit
6.1.2 Capture analysis is not widely used in the drilling-fluids solids control industry for at least two reasons. a) The requirement for “representative samples” precludes successful use of capture to evaluate shale-shaker performance. b) Solids concentrations in drilling fluids have traditionally been reported volumetrically rather than gravimetrically. 6.1.3 Annex A shows the derivation of the capture equation. 6.2 Application 6.2.1 Capture is usually expressed as a percentage of the system-suspended solids, and can be easily calculated if the concentration (mass fraction, percent) of suspended solids is known for the process streams conveyed to and from a separator. 6.2.2 If samples of the three process streams (feed slurry, overflow slurry and underflow slurry) can be collected and assumed to be representative of steady-state operation of the separator, then calculated capture is a good measure of the effectiveness of the separator. 6.2.3 Capture analysis is a useful tool and should be considered when evaluation of equipment performance on drilling fluid systems is needed. However the data generated apply only to the time at which the samples are collected. 6.2.4 Capture data can be extrapolated to predict the solids removed by the separator over longer time periods if the following conditions apply. c) The separator is working under steady-state condition with consistent and homogeneous feed; d) Sufficient data are collected to establish average performance for the time period studied. 6.2.5 Application of this analysis is limited to evaluation of centrifuges and hydrocyclones. The procedure cannot be applied to shale shakers due to the difficulty in obtaining representative samples of the three process streams and the inherent inconsistency of shale-shaker feed conditions. 6.2.6 The process stream terminology is illustrated in Figure 1 and symbols are defined in 3.2.