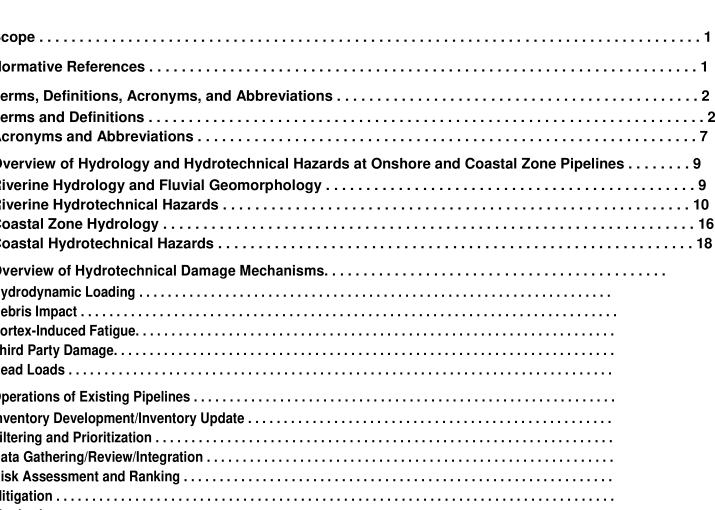 API RP 1133-2010 pdf download.Managing Hydrotechnical Hazards for Pipelines Located Onshore or Within Coastal Zone Areas.
3.1.11 cross vanes Structure typically constructed from timber or loose rock designed to guide flow away from channel banks to reduce bank erosion and promote local sedimentation. 3.1.12 cuttings A mixture of drilling mud and soil that is generated during drilling operations. 3.1.13 degradation The general lowering of the streambed by erosive processes, such as scouring by flowing water. The removal of channel bed materials and downcutting of natural stream channels. 3.1.14 deposition The physical process by which sediments, soil, and rock are added to a landform. 3.1.15 depth of cover (DoC) The distance between the top of the pipeline and the surface of the ground above the pipeline. It will typically vary across the waterway due to variations in the pipeline profile and the channel bottom topography. Minimum DoC represents the least amount of ground cover above the pipeline. 3.1.16 discharge Discharge or stream/river flow, is the volumetric rate of flowing water which is transported through a given cross- sectional area. Discharge is typically described in cubic feet per second (cfs). 3.1.17 engineered span A pipeline designed and engineered to cross a waterway at elevations above the channel bottom. Such spans differ from those that are the result of either channel bed erosion or bank erosion. 3.1.18 erosion The wearing away or removal of soil or other material by the action of water or other agents. 3.1.19 fatigue The phenomenon leading to facture of a material under repeated or fluctuating stresses having a maximum value less than the tensile strength of the material. 3.1.20 fetch The distance over which waves are generated by a wind having constant speed and direction.
3.1.21 flood An unusual and rapid accumulation or runoff of surface waters from any source resulting in flowing water significantly greater than typically occurs and exceeds the capacity of the stream channel. Results in the partial or complete inundation of normally dry land. 3.1.22 floodplain A relatively flat area of land adjacent to a river or stream, formed mainly of river sediments and may become submerged by floodwaters. 3.1.23 fluvial geomorphology The science devoted to understanding rivers and streams, and the deposits and landforms created by them, both in their natural setting as well as how they respond to human-induced changes in a watershed. 3.1.24 frazil ice An accumulation of loose, spongy ice within a body of water or on its surface. 3.1.25 gabions Steel wire mesh baskets filled with stone used to prevent erosion. 3.1.26 gauging station A location used by hydrologists to monitor and test onshore and coastal water bodies. Measurements of water level surface elevation (stage) or volumetric discharge (flow), or both, are generally taken. 3.1.27 gas Natural gas, flammable gas, or gas which is toxic or corrosive. 3.1.28 geotextile fabrics Permeable fabrics typically incorporated into erosion control structures that separate, filter, reinforce, and protect soils from erosion. 3.1.29 hazardous liquid Petroleum, petroleum products, anhydrous ammonia, or ethanol. 3.1.30 high consequence area (HCA) High consequence areas, as defined in 49 CFR Part 1 95.450, include: 1 ) commercially navigable waterways; 2) high population areas; 3) other populated areas; and 4) unusually sensitive areas (e.g. drinking water supplies, ecological sensitive areas). 3.1.31 hydrograph A graph of the water level or rate of flow of a body of water as a function of time.
3.1.33 hurricane An extremely large, powerful, and destructive storm with very strong winds that occurs especially in the western part of the Atlantic Ocean, the Caribbean Sea, and the Gulf of Mexico. 3.1.34 incipient motion When a sediment particle or grain on the channel bottom first begins to move under the influence of flowing wind, water, or other agent. 3.1.35 land loss Transition of areas from land to open water as a result of beach and bluff erosion, and losses of wetlands around interior bays and estuaries. 3.1.36 matting Installing wood planks or other material in an effort to stabilize a work area, or route of ingress/egress. 3.1.37 meander A channel pattern characterized by a series of pronounced alternating bends formed by fluvial processes.