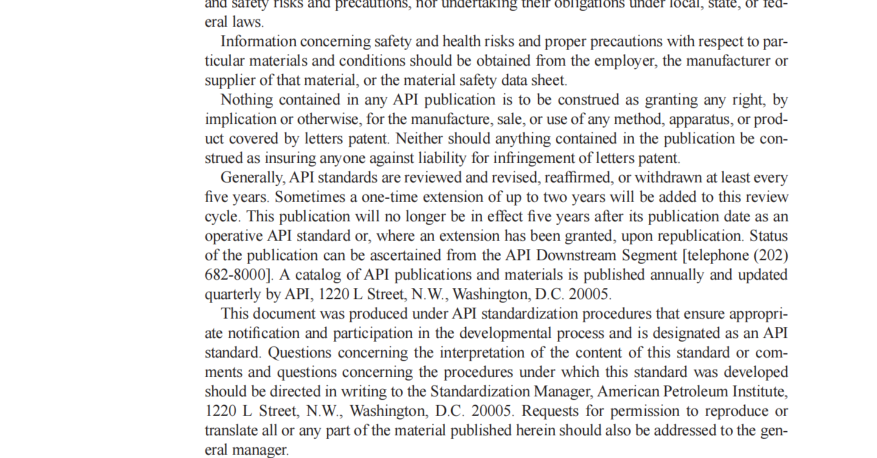 API RP 1004-2003 pdf download.Bottom Loading and Vapor Recovery for MC-306 & DOT-406 Tank Motor Vehicles .
1 General 1.1 BACKGROUND In 1960, the API Transportation Department studied bot- tom loading and prepared a report that pointed out the need for uniform standards for tank vehicle bottom loading equip- ment. The API Marketing Department expressed interest in the project, and in 1961, a joint committe was formed to begin work on standardization. By 1965, the joint committee reached a consensus on stan- dardization procedures. To ensure interchangeability, a tank vehicle adapter had to be developed that would be available to all manufacturers and users. With the cooperation of all known interested manufacturers, recommended criteria for the adapter were established. In October 1967, the first edition of API RP 1004 was pub- lished. In 1971, changes in the 1967 edition were necessary, and another joint committee was formed to produce a second edition, which was published in June 1972. Again, all known interested manufacturers cooperated in writing the revised standard. The increasing requirements for vapor-recovery systems dictated a revision of API RP 1004 to expand the material on tank vehicle recovery systems, to provide additional guidance, and to promote the compatibility of equipment. In addition, a requirement for a standard electrical connection between the vehicle and the loading island became necessary to tie the sys- tems together. To disseminate this new material, Change 1 to the second edition was prepared by the joint committee and was distributed in January 1974. The joint committee was discharged after distribution of Change 1. It was soon apparent that a continual update of the bottom loading and vapor-recovery information would be required. Task groups were set up within the Transportation Department to prepare the third and subsequent editions. These task groups work closely with the Marketing Depart- ment, all known interested manufacturers of bottom loading equipment and tank vehicles, and other users of tank vehicles.
4 Bottom Loading for Tank MotorVehicles 4.1 ADAPTER USED FOR BOTTOM LOADING 4.1.1 Required Features 4.1.1.1 Type To mate with loading couplers, the tank vehicle adapter must have the basic configuration shown in Figure 1 ]all tol- erances are provided in the appropriate figure). In the open position, the adapter must have a clear, unobstructed opening 2 in. (50.8 mm) in depth, measured from the outer face or clo- sure of the valve as shown in|Figure 1. ]If a poppet device is used, the adapter poppet must have a travel of2 in. (50.8 mm), measured from the sealing surface, as shown inFigure 1. ]The front face of the adapter poppet must be flat within 0.004 in. (0. 102 mm), excluding the corner radius. No fastening device shall protrude above the general plane of the adapter face. If an interlock control is installed on the adapter, its dimen- sions must conform to those shown in Figure 2. ]Table 1 pro- vides equivalent SI values for the customary dimensions shown inFigures Iand 2. 4.1.1.2 Actuation The primary liquid control must be by means of the set stop meter on the loading island or a self-contained system on the tank vehicle. The coupler may be opened for loading by manual or automatic means. 4.1.1.3 Size of Product Opening The adapter must have a product opening 4 in. (101.6 mm) in diameter at the exposed outer face or closure of the valve. 4.1.1.4 Pressure Rating The adapter must be designed for a working pressure of 75 pounds per square in. (psi) (517 kilopascals) and shall not leak at 1.5 times working pressure.
4.1.1.6 Mating Action The mating action must be of the push type, with provision for locking without rotating the loading coupler body. The cou- pling range must permit mating of the coupler to the adapter in any position in a range of 360 degrees, without any coupler contacting an adjacent adapter spaced on 10-in. (254-mm) centers. A safety interlock or two-step action must be provided on the coupler to prevent any liquid flow while coupling or uncoupling. 4.1.1.7 Sealing Surface As shown in Eigure IJthe sealing surface must have a cir- cular finish of not more than 63 μin. (seeTable I ]for SI con- versions of customary units). 4.1.2 RECOMMENDED FEATURES 4.1.2.1 Overall Size The adapter should be as compact as is practicable for ade- quate design. The overall size of the adapter and the coupler, including the operation of any handles or controls, should permit adjacent adapters to be spaced on 10-in. (254-mm) centers. Adapters should be easy to operate with heavily gloved hands.