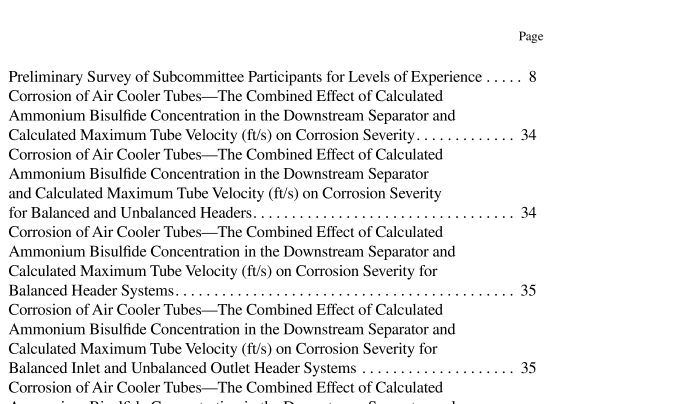 API PUBL 932-A-2002 pdf download.A Study of Corrosion in Hydroprocess Reactor Effluent Air Cooler Systems.
1 Introduction The treatment of crude distillation products with hydrogen to produce higher yields of gasoline and jet fuel became a major part of refinery technology with the introduction of hydrocracking in the 1950s. Later, other hydrofining pro- cesses for removal of impurities from products were intro- duced. These technologies all had similar corrosion experiences that eventually were identified as being associ- ated with the presence of hydrogen sulfide (H 2 S) and ammo- nia (NH 3 ), and their reaction product ammonium bisulfide (NH 4 HS), in the reactor effluents. Minor contaminants such as chlorides and oxygen were also believed to have an influ- ence on corrosion. But in general, corrosion was associated with salt deposition, concentrated solutions of ammonium bisulfide and the flow velocity. In 1976, R. L. Piehl (Standard Oil of California) conducted a survey for the National Association of Corrosion Engineers (NACE) on corrosion in Reactor Effluent Air Cooler (REAC) systems. Industry-wide experience was gathered and ana- lyzed to establish guidelines to minimize REAC corrosion. In 1996, Unocal/UOP conducted an extensive survey of their licensees world wide. Their conclusions confirmed the valid- ity of the original parametric guidelines and contributed to the importance of certain design features in avoiding corrosion problems. Since the earlier survey, failures have continued to occur and while it is believed that most have resulted from operation outside of the guidelines, there has been no system- atic study of the experience or open documentation of indi- vidual events. 2 Preamble Information for this report has been gathered from open lit- erature, private company reports and interviews with represen- tatives of major refining companies. The terminology used by each of these sources to describe some of the corrosion events has varied slightly and may have introduced some double meanings. Every effort has been made in this document to maintain consistency
Throughout the report, reference is made to the effects of velocity on corrosion. It is commonly acknowledged that velocity induces accelerated attack by a mechanism involving the erosive effect of the high velocity liquid. The many con- tributors have frequently referred to this phenomenon as ero- sion. The consensus however appears to be that the mechanism is one of accelerated corrosion. This should more properly be categorized as erosion-corrosion. Thus, unless otherwise stated, the use of the term erosion-corrosion is meant to describe the severe corrosion experienced by high velocity fluid flow. 3 1975 NACE Survey Prior to this survey, R. L. Piehl had presented the results of studies conducted by his company at an API Division of Refining meeting in Philadelphia, May 15 – 17, 1968 1 . These studies provided the earliest insights into the corrosion prob- lems associated with this new technology and attempted to identify critical parameters contributing to the corrosion of carbon steel equipment. Among the important conclusions reached at that time was the recognition that sulfide corrosion in an alkaline environ- ment was the primary cause of corrosion. The quantities and relative ratios of ammonia and hydrogen sulfide were per- ceived as important and the possible influence of minor con- taminants such as chlorides and oxygen were acknowledged. The study concluded that the dominant mode of attack was erosion-corrosion of air cooler tube ends and some flow velocity limitations were suggested to avoid the problem. It was subsequently recognized that the subject was much more complex than originally thought and that other equip- ment, especially piping, was also affected. To broaden the data base and capture as much experience as possible, NACE Group Committee T-8 (Refining Industry Corrosion) set up Task Group T-8-1 to conduct a survey of the T-8 membership on the subject of corrosion of hydroprocess effluent air coolers 2 .