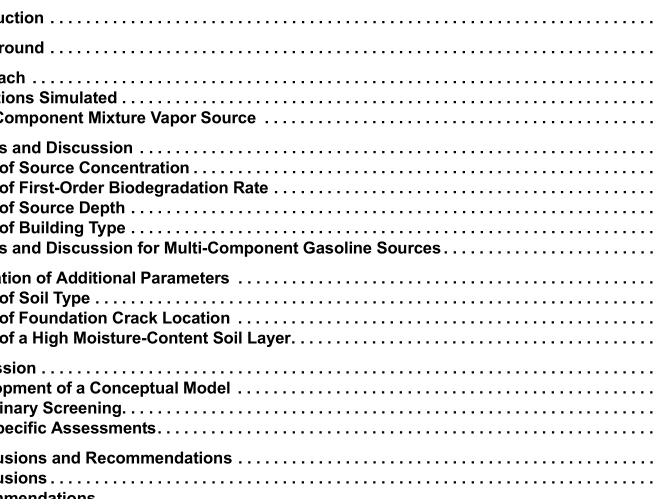 API PUBL 4775-2009 pdf download.Simulating the Effect of Aerobic Biodegradation on Soil Vapor Intrusion into Buildings Evaluation of Low Strength Sources Associated with Dissolved Gasoline Plumes.
Aerobic biodegradation can contribute significantly to the attenuation of petroleum hydrocarbon vapors in the unsaturated zone; however, most regulatory guidance for assessing potential human health risks via vapor intrusion to indoor air either neglect biodegradation or only allow for one order of magnitude additional attenuation for aerobically degradable compounds, which may be overly conservative in many cases. This paper describes results from 3-dimensional numerical model simulations of vapor intrusion for petroleum hydrocarbons to assess the influence of aerobic biodegradation on the attenuation factor for a variety of source concentrations and depths for buildings with basements and slab-on-grade construction. Provided that oxygen is present in the vadose zone, aerobic biodegradation of petroleum hydrocarbon vapors in the unsaturated zone will reduce the soil gas concentrations and the potential risks from vapor intrusion to indoor air compared to non-degrading compounds. At lower source concentrations and/or deeper source depths, aerobic biodegradation may result in a reduction in vapor intrusion attenuation factors by many orders of magnitude. The magnitude of the reduction depends on site-specific conditions, which should be considered in the development of a conceptual site model for each site. However, oxygen supply and degradation rates are likely to be sufficient at many sites to mitigate potential risks from vapor intrusion for low vapor concentration sources (less than about 2 mg/L-vapor total hydrocarbons). The simulations conducted in this study provide a framework for understanding the degree to which bio-attenuation will occur under a variety of scenarios and provide insight into site conditions that will result in significant biodegradation.
Subsurface migration of volatile compounds and vapor intrusion to indoor air is a potential exposure pathway for human occupants of buildings over or near contaminated soils and groundwater. In the past decade, there has been a significant increase in attention to vapor intrusion issues and several new regulatory guidance documents have been developed by State and Federal agencies for assessment and management of vapor intrusion risks. These guidance documents generally provide a framework for screening sites to assess whether vapor intrusion poses no significant risk or may require further evaluation, including assessment, remediation, or exposure controls. Most regulatory guidance documents use conservative assumptions to account for uncertainties in the screening process. This results in decisions to further evaluate sites more frequently than may actually be necessary. It is expected that screening procedures will become less conservative as we learn more about the processes affecting vapor intrusion. To date, most vapor intrusion screening procedures either assume that biodegradation does not occur, or allow for an arbitrary 10-fold reduction in the predicted indoor air concentration for petroleum hydrocarbons. Many petroleum hydrocarbons are metabolized by ubiquitous, naturally occurring soil microbes provided that sufficient oxygen is present in the subsurface. Several modeling studies and empirical data reviews have shown that aerobic biodegradation in the unsaturated zone can significantly attenuate vapor intrusion of petroleum hydrocarbons in some settings (i.e. DeVaull, 2007; Abreu and Johnson, 2006, Roggemans, et al. 2001). For example, the Abreu and Johnson (2006) study showed significant reduction in vapor intrusion for deeper and weaker sources and little to no reduction for shallower and stronger sources.
DeVaull (2007) compiled a total of 84 data sets of reported laboratory and field calculated biodegradation rates for aromatic hydrocarbons measured by multiple investigators. The data included biodegradation rates for individual chemicals: benzene, toluene, ethylbenzene and xylene (BTEX), trimethylbenzene, and naphthalene; as well as rates for mixed BTEX chemicals. The geometric mean of the water-phase first-order biodegradation rates (λ) for the values reported in those studies is 0.79 h -1 . The values of λ considered in this work are: 0.079, 0.79 and 2 h -1 . These values were selected based on the geometric mean value reported by DeVaull with higher and lower values included to assess the sensitivity of this parameter. The no-biodegradation case (λ = 0) was also included in this work for comparison purposes. The oxygen threshold air concentration for biodegradation to occur is a user-defined input to the model. In this study, the oxygen threshold was assumed to be 1 % vol/vol (normalized concentration equal to 0.05). This threshold was chosen based on previous published biodegradation studies. Field data reported in Roggemans, et al. (2001) show decreasing oxygen concentration with depth until reaching a constant value of 2 % vol/vol. Additionally, Bordon and Bedient (1986) report that aerobic biodegradation is observed when the oxygen concentration in groundwater is above 0.1 mg/L-water (vapor equilibrium oxygen concentration of 0.24 % vol/vol).