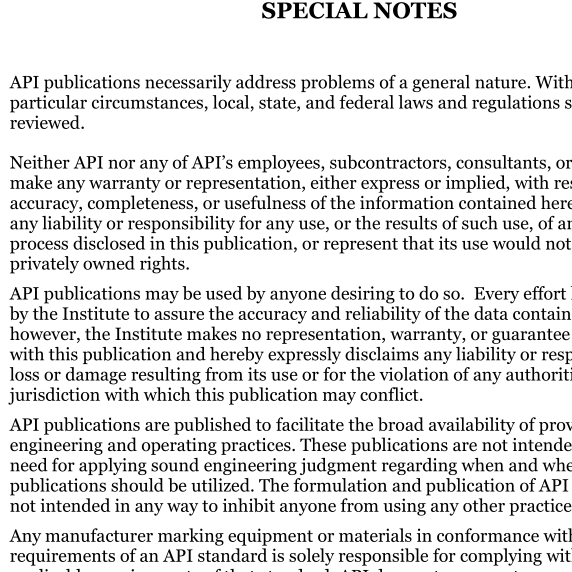 API Publ 4734-2005 pdf download.Modeling Study of Produced Water Release Scenarios.
Model predictions of the time required for the maximum chloride concentration to reach an adjacent well were used to measure the sensitivity of each factor to the movement of chloride through the vadose zone. Results indicated that climate, vadose zone texture, and ground water depth exerted the most control on this prediction. Other factors were relatively unimportant in the prediction of the time of transport. The vertical distribution of chloride in the vadose zone after a release was simulated for two representative climates: Hobbs, New Mexico (arid climate) and Shreveport, Louisiana (humid climate). The movement of chloride during the first 5 weeks after a release did not depend on climate, but rather on the particular weather conditions (e.g., rainfall events) after the hypothetical release. Review of 96 scenarios modeled showed that the center of mass (of chloride) after 5 weeks of transport was sometimes deeper in Hobbs and sometimes deeper in Shreveport, despite the fact that other input parameters were held constant. The depth of penetration depended strongly on weather conditions and, more importantly, on the soil texture. The modeling shows that chloride migration during the first 5 weeks after a release accounts for 70% of the chloride migration observed after 50 weeks. On average, the center of mass is predicted to move about 1 m in the arid climate and 3 m in the humid climate. The average penetration depth for the center of mass for clay, clay loam, sandy loam and sand are about 0.2, 0.3, 2.0, and 5.0 m respectively. For many scenarios, chloride migration from the ground surface to a 30-m deep aquifer requires decades and, in the arid climate, sometimes centuries. The migration of chloride over time in 22 different scenarios was examined. As expected, the maximum predicted concentration of chloride decreases with the depth of penetration: the center of mass attenuates with vertical transport. In a humid climate the observed attenuation is faster than in the arid climate.
The Effects of Soil Flushing Soil flushing can be an effective alternative to soil restoration by excavation, disposal, and soil importation. Natural soil leaching occurs in the humid climate and a soil flushing program is typically used in lower permeability soils. In the arid climate, previous simulations demonstrated that the center of mass remained near the ground surface for decades. Therefore, soil leaching was simulated for the arid climate only. Although only 8 scenarios were modeled, soil restoration by leaching actually improved the ground water quality in 7 of the 8 cases. For the remaining scenario, predicted ground water quality was 295 ppm chloride with a soil leaching program and 291 ppm under the no-action alternative. Modeling of this topic is presented in Chapter 9. The Effect of Revegetation Some arid climate experts believe that recharge of ground water does not occur in flat areas where vegetation is present, maintaining that the plants quickly use any precipitation that would cause downward movement of soil water. The effect of vegetation was simulated in this study by assuming that warm and cold weather grass would re-vegetate a spill area in a humid climate after chloride in soil decreased to about 500 ppm. In the arid climate, the evergreen Four Wing Salt Bush was used as the volunteer species under these same conditions. Vegetation reduced the chloride flux to ground water in the humid climate. In the arid climate, model simulations predicted a lower chloride concentration in ground water in 10 of 17 sand-profile scenarios. For the seven arid climate scenarios where modeling predicted a higher chloride concentration in ground water, the increases were less than 30%. More work is required to fully understand these results. The examination of the effects of revegetation is presented in Chapter 10.