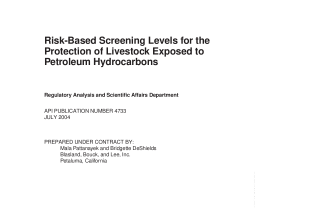 API PUBL 4733-2004 pdf download.Risk-Based Screening Levels for the Protection of Livestock Exposed to Petroleum Hydrocarbons.
Livestock may be exposed to accidental releases of petroleum hydrocarbons at or near exploration and production sites and, in these cases, there may be a need to estimate potential risks to these receptors. A framework was developed to 1) determine when livestock should be included in a risk evaluation and 2) estimate risks of petroleum hydrocarbon exposure to livestock. A conceptual site model (CSM) was developed to assess whether complete and significant exposure pathways for livestock exist at a site. To estimate potential risks in this screening-level risk assessment, toxicity reference values (TRVs) and drinking water and soil risk-based screening levels (RBSLs) for petroleum hydrocarbons, including: crude oil; benzene, toluene, ethylbenzene, and xylene (BTEX); and polycyclic aromatic hydrocarbons (PAHs) were developed for livestock. TRVs and RBSLs were developed for the protection of a variety of livestock including dairy cattle, beef cattle, calves, sheep, goats, camels, and horses. TRVs for petroleum hydrocarbons were based on available toxicity values from studies conducted on livestock, if available, or on small mammals extrapolated to be protective of livestock evaluated in this report. RBSLs were calculated for the two complete and significant exposure pathways identified in the CSM, drinking water ingestion and incidental soil ingestion. Drinking water and soil RBSLs were calculated based on the TRVs and the selected exposure assumptions for the livestock. The TRVs and RBSLs developed for this framework were comparable to human health RBSLs as shown in the following table:
Consumption of petroleum hydrocarbons by livestock has been found to lead to a range of health problems, including neurotoxicity (Coppock et al. 1995; Khan et al. 1995), fetal toxicity (Coppock et al. 1995), damage to the gastrointestinal tract (Coppock et al. 1996), respiratory system, kidney, and liver (Meadows and Waltner-Toews 1979; Edwards 1985a; Coppock et al. 1995; Coppock et al. 1996; Stober 1962). Petroleum ingestion has also been linked to anorexia (Edwards and Zinn 1979), lethargy (Meadows and Waltner-Toews 1979; Edwards 1985b), and fatal poisoning in cattle (Edwards and Zinn 1979; Meadows and Waltner-Toews 1979; Edwards and Gregory 1991). The purpose of this study was to develop toxicity values and screening guidelines for evaluating risks to livestock from exposure to petroleum hydrocarbons. This report addresses how to: (1) determine whether livestock should be included in a risk evaluation, and (2) estimate risks of petroleum hydrocarbon exposures to livestock. In this report, the approach used to develop toxicity values and screening guidelines for livestock from petroleum hydrocarbon exposures was divided into two steps: · The first step included evaluation of the potential for exposure through the development of a conceptual site model (CSM). · The second step included development of Toxicity Reference Values (TRVs) and Risk-Based Screening Levels (RBSLs) for the protection of livestock. This report focused on whole crude oil and its toxicologically important constituents (i.e. benzene, toluene, ethylbenzene, and xylene [BTEX] and polycyclic aromatic hydrocarbons [PAHs]). Metals can also be present in petroleum products, but they are generally not found at high enough concentrations to provide a significant health risk (Magaw et al., 1999) and therefore metals are not addressed in this report.
3.1 Receptor Evaluation Livestock that are potentially vulnerable to toxic effects of petroleum hydrocarbons include animals that could ingest significant quantities of soil, water, and/or food in oil-contaminated areas. Access to the contaminated areas is key; cattle, sheep, goats, and horses that forage in pasture areas are more likely to be potential receptors, while species that are raised in more confined and controlled conditions, such as chickens or pigs, would have less chance of exposure to petroleum hydrocarbons. Outside of the United States, other types of livestock animals may also be exposed to petroleum compounds, such as camels, llamas, oxen, etc. It was assumed that exposures to these receptors would be similar to those of typical livestock in the United States based on similarities in body weights and feeding habits. 3.2 Pathway Evaluation The pathways by which livestock could be exposed to petroleum hydrocarbons are incidental soil ingestion, water ingestion, and direct ingestion, inhalation, dermal absorption, and plant ingestion. Based on available information, the primary exposure pathways considered significant in the exposure model as show in the CSM (Figure 1) included incidental soil ingestion, water ingestion, and direct petroleum product ingestion. Inhalation, dermal absorption, and plant ingestion were considered minor pathways for petroleum hydrocarbons (CCME 2000). The exposure pathways listed above are described in more detail below. 3.2.1 Soil Ingestion Soil can comprise a substantial proportion of the livestock diet. Livestock may consume soil inadvertently during grazing (Zach and Mayoh 1984; CCME 2000) or may intentionally ingest salty-tasting soil (Coppock et al. 1995). According to the CCME (2000), cattle are exposed to petroleum hydrocarbons primarily through consumption of contaminated soils, particularly during grazing. The authors state that the majority of petroleum hydrocarbon exposure in cattle is due to ingestion of surface soils.