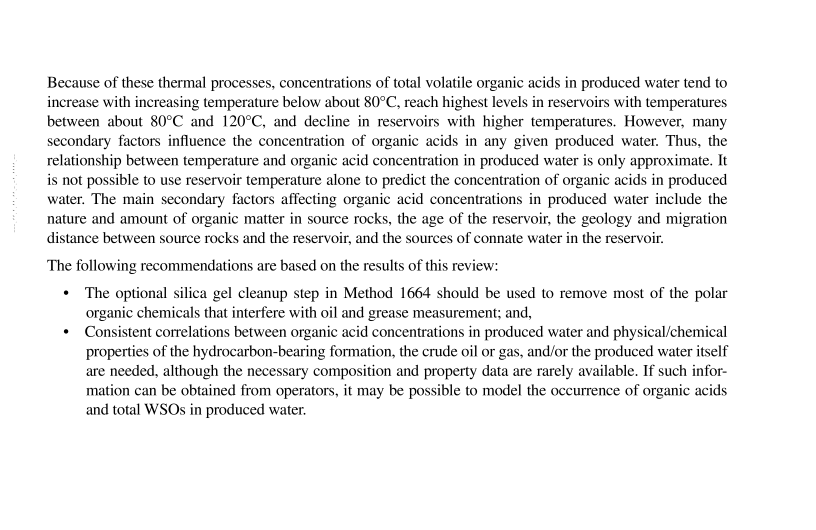 API Publ 4717-2002 pdf download.Predictors of Water-soluble Organics (WS0s) in Produced Water— A Literature Review.
The U.S. Environmental Protection Agency (EPA) or a state agency designated by EPA issues region wide (general) or site- specific National Pollutant Discharge Elimination System (NPDES) permits to regulate discharges of treated produced water to State and Federal offshore waters of the United States. Produced water intended for ocean discharge is first treated in various oil/water separation devices to remove dispersed oil droplets. Current general permits for Federal offshore waters of the Gulf of Mexico have limits for total oil and grease in produced water of 42 mg/L (ppm) daily maximum and 29 mg/L monthly average. EPA requires oil and grease concentrations in produced water to be monitored by EPA Method 413.1 or 1664 (EPA, 1983, 1995). Both methods are gravimetric. Nonpolar and slightly polar organic matter in produced water is extracted with Freon ® (Method 413.1) or n-hexane (Method 1664). In Method 1664, the analyst has the option to treat the hexane extract with silica gel to remove polar interfering compounds. The extract is dried and weighed to derive a concentration of total extractable organic matter (total oil and grease). Although the oil and grease methods are inexpensive and easy to perform, there are two technical problems that may have implications for the regulation of discharges of produced water to offshore marine waters. First, low-molecular-weight, volatile alkane and aromatic hydrocarbon (BTEX) analytes are lost by evaporation during sample processing. Second, many non-hydrocarbon organics, and possibly some metals, are extracted by the solvent and measured as part of the total oil and grease in produced water, even after extract cleanup with silica gel. Loss of volatile hydrocarbons is not a concern, since these chemicals are not persistent in surface waters and so are unlikely to contribute to the toxicity of produced water plumes to marine animals (Neff, 1997). In a regulatory context, the second problem is more of an issue.
If oil and grease concentrations in produced water from a platform exceed regulatory limits for oil and grease, the operator may be required to cease discharging produced water and upgrade the produced water treatment system on the platform. If most of the organic matter measured oil and grease is comprised of water-soluble organics and not true petroleum hydrocarbons, improvement of the efficiency of the oil/water separation system will not help to bring total oil and grease concentrations down below regulatory limits. Usually in such circumstances offshore compliance can only be accomplished by closing in the wells or reinjecting the produced water, both of which have substantial financial consequences, especially in a deep offshore environment. There are two approaches to resolving this problem: • Develop and gain EPA approval of a new analytical method for total oil and grease that accurately measures the true concentration of produced water petroleum hydrocarbons, excluding non-hydrocarbon water soluble organics (WSOs); or, • Develop and gain EPA acceptance of correlations or predictors of elevated concentrations of non-hydrocarbon WSOs in produced waters, so that these correlations might be used to adjust monitoring data in compliance determinations.
During millions of years of geologic time, petroleum and natural gas may accumulate in porous sediments (e.g., sands) trapped between layers of impermeable rock deep within the earth (Collins, 1975). Water may be trapped during millions of years with the oil and gas. This water may be derived from ancient fresh or salt water (connate water) and often is as old as the fossil fuels in the reservoir. When the hydrocarbon reservoir is tapped by a well, the produced gases and fluids may contain connate water. Also, in some oil fields, fresh or salt water may be injected into the reservoir through injection wells to displace oil toward the production wells. Sometimes, this injection water channels through to the production well and is produced with the oil and gas. The water produced with oil and gas is called produced water, produced formation water, or oilfield brine (Neff, 1987, 1997; Black et al., 1994). Before the crude oil can be refined or the gas processed, the water must be removed. During offshore operations, separation of the produced water from the oil and gas may take place on the production platform or the oil/gas/water mixture may be sent through a pipeline to a shore facility where the produced water is separated from the oil and gas. If not re-injected, the produced water is treated to meet regulatory limits for oil and grease so it may be discharged to the ocean from the platform or from an ocean outfall from a shore-based treatment facility. The current limit for total oil and grease in produced water destined for ocean disposal in U.S. Federal and Upper Cook Inlet, AK, waters is 42 mg/l (ppm) daily maximum and 29 mg/ L monthly average (Otto and Arnold, 1996; Veil, 1997).