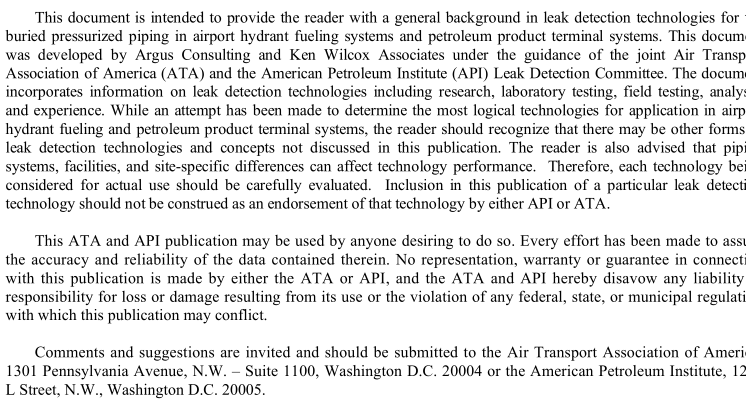 This Study Documentation Report (the Study) analyzes of the performance of different types of leak detection technologies that were applied to buried pressurized piping systems used in airport hydrant fueling and petroleum product terminals. The Study was conducted by Argus Consulting and Ken Wilcox Associates on behalf of the Air Transport Association of America (ATA) and the American Petroleum Institute (API). This report is intended to provide an overview of the Study methodology and results. The purpose of the Study, as defined by the joint API and ATA Leak Detection Committee, was to Òidentify and evaluate reliable leak detection technologies that are currently commercially available and cost-effective for buried piping associated with airport hydrant fueling systems and petroleum product terminals.Ó The Study was conducted in three phases. In Phase I, the Study consultants collected published data and vendor information regarding the leak detection technologies reported to be applicable to the buried, pressurized piping in airport hydrant fueling systems and petroleum product terminals. During that phase, criteria were identified for evaluating the leak detection technologies in the specified applications. Through application of those criteria, six types of leak detection technologies were determined to have the potential to satisfy the Study purpose. One vendor of each of these technologies was selected and agreed to participate in Phase II of the Study, which consisted of actual testing under conditions intended to represent or approximate conditions at an airport hydrant fueling system or petroleum product terminal.
Because the Study is not intended to serve as an evaluation or endorsement of particular leak detection technology vendors, rather than identifying the technologies tested by vendor name, the technologies are identified by descriptive categories. While technology categories are used throughout the report, the reader is advised that each of the technologies actually tested have proprietary features that may be unique. The features are described to the extent necessary for accurate reporting purposes consistent with the vendorsÕ proprietary protections. The six categories of leak detection technologies tested are identified as follows: ¥ Pressure decayÑdual pressure ¥ VolumetricÑdual pressure ¥ Pressure decay with temperature compensation ¥ Acoustic emission ¥ Chemical marker ¥ Hydrocarbon vapor monitoring The first three technologies can be classified as pressure-based technologies involving the measurement of fluid within the pipe. The acoustic technology analyzes acoustic signals caused by a leak, which are transmitted through the piping and piping contents. The last two technologies employ external monitoring methods, monitoring the backfill outside of the buried piping for evidence of a leak. The following is a summary of the information gleaned about the six categories of leak detection technologies:• Pressure decayÑdual pressure. This leak detection technology requires a means to isolate sections of the piping to conduct the test. This is normally accomplished with double block and bleed valves and a pressure transmitter installed in each test section. Application of this technology also requires a means to pressurize and depressurize the piping section being tested. Each leak detection test takes approximately 45 minutes when the piping system is isolated and under static pressure conditions. The technology appears to be capable of detecting a leak of about 0.01 percent of the line volume per hour with 99 percent probability while operating at a one percent false alarm rate.
¥ Pressure decay with temperature compensation. This technology monitors the pressure decay in a static line and sends a pressure pulse through the line at the beginning and end of the test to measure any temperature changes. It requires approximately a 30-minute test period. Testing of this technology during the Study was abbreviated because the vendor determined that further enhancements were needed. This technology showed promise, but it appears to require further research and development before being implemented in an operational setting. Its application will depend on improvements by the vendor, but apparently this technology could be designed for either permanent installation or point-in-time testing at both airport hydrant fueling systems and petroleum product terminals. ¥ Acoustic emission. This technology operates through the placement of microphones (or accelerometers) with radio transmitters on the pipe at intervals of 300 to 500 feet. The acoustic signal generated by liquid flowing out of a defect in the pipe is recorded and analyzed by a computer software program. This technology is adversely affected by ambient noise. Thus, given the noise associated with operations at airports, this technology appears to require further development and testing to be viable in actual application at an airport or petroleum product terminal.