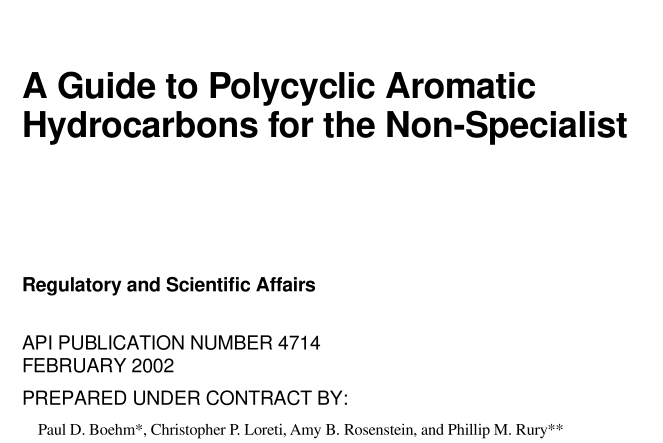 API Publ 4714-2002 pdf download.A Guide to Polycyclic Aromatic Hydrocarbons for the Non-Specialist.
2 Sources of PAHs PAHs are produced in nature through four generalized pathways: 1) low temperature diagenesis of organic matter (part of the changes undergone by a sediment after its initial deposition); 2) the formation of petroleum and coal; 3) incomplete or inefficient combustion at moderate to high temperatures (pyrolysis); and, 4) biosynthesis by plants and animals. These processes are the primary sources of PAHs. Primary sources of PAHs also include anthropogenic (man-made) sources. These include the combustion of fossil fuels and biomass, such as wood, as well as chemical production that results in the formation of PAHs. Because the type distribution of PAHs depends on the temperature of formation, the characteristic distributions of these different sources can be used to help distinguish among different sources of PAHs in the environment. Once produced, PAHs are introduced or “delivered” into the environment through a number of pathways (i.e., secondary sources ), which are described in Section 3. 2.1 PRIMARY SOURCES OF PAHS Diagenic PAHs. Diagenic PAHs are those produced by natural processes that are set in motion when organic matter is deposited in nature—in soils or sediments. These processes, collectively called diagenesis, begin shortly after deposition of the organic matter. These are low temperature processes that occur after oxygen is depleted, and are believed to involve microorganisms, such as bacteria, though non-biological processes may occur in tandem. Relatively few individual PAHs are produced by these early diagenic processes. One of the most notable PAHs produced in this manner is the five-ringed PAH, perylene, shown in Figure 2-1. Perylene is commonly found in sediments of rivers, lakes, and oceans at a depth in the sediment where oxygen is reduced.
The types of PAHs formed as fossil fuels include a complex variety of parent (i.e., unsubstituted), and alkylated PAHs. Series of PAHs comprised of parent and substituted PAHs form many families or homologous series of PAHs. The phenanthrene homologous series of PAHs includes, for example, phenanthrene itself, plus a series of alkylated homologues of phenanthrene with many alkyl substitutions (see Figure 2-2). The relative abundance of the alkylated PAHs of petrogenic PAHs far exceeds the abundance of the parent (i.e. unsubstituted) compound or C 0 -phenanthrene. The fact that alkylated PAHs “are much greater than” parent PAHs is a main feature of petrogenic PAHs. This is illustrated in the first chart of Figure 2-3 for typical alkyl homologue distributions. Pyrogenic PAHs. High temperature processes such as the combustion of fossil fuels or the burning of wood also form PAH (Figure 2-3). During higher temperature processes, those organic compounds that escape complete combustion (oxidation to carbon dioxide and water) include the pyrogenic PAHs. Diesel fuel combustion, forest fires, and the smoking of foods with certain woods are examples of pyrogenic processes. PAHs are also formed on meats by barbecuing (see Table 5-1). Included in this pyrogenic category are the products of high temperature processing of coals in coal gasification processes. The residuals of the coal gas processes are termed coal tars , and they are rich in the pyrogenic PAHs.
Because the high temperature processes tend to destroy the more reactive alkylated PAHs, the production of unsubstituted PAHs are favored in pyrogenic processes. Thus, a major feature of pyrogenic PAHs is that the parent PAHs “are much more numerous” than alkylated PAHs. As a result, PAH distributions that are produced by the hotter and more rapid pyrolysis or combustion-related processes are markedly different from those produced by petrogenic processes (see Figure 2-3). Also, pyrogenic PAHs are characterized by the higher abundance of the four, five, and six+ ringed PAHs relative to PAHs found in most petroleums. Biogenic PAHs. Certain PAH precursor compounds are biosynthesized in nature, although the direct biosynthesis of PAHs per se , remains uncertain. Although the contribution of microorganisms to the production of PAHs in nature has been reported, their contribution may be more to the oxygen-containing aromatic compounds rather than to PAHs themselves. It is well-known that other PAH precursor compounds (e.g., abietic acid) exist in abundance in certain tree resins (e.g., conifer resins) and that specific PAHs are formed from the diagenesis or the combustion of these resins. For example, retene , (Figure 2-4), a specific C 4 -phenanthrene isomer, is ubiquitous in residues from these plants and can be found in high relative abundance in sediments of pristine northern environments. Similarly, simoneltite , a substituted PAH compound, is found in abundance where organic conifer residues exist. These specific, singular PAHs are found in coastal sediments around the world.