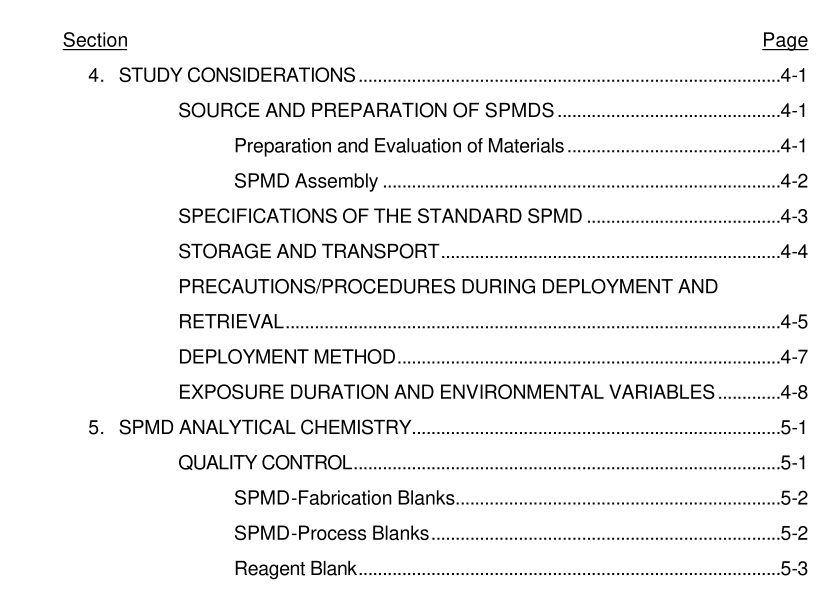 API Publ 4690-2002 pdf download.A Guide for the Use of Semipermeable Membrane Devices (SPMDs) as Samplers of Waterborne Hydrophobic Organic Contaminats.
In view of the problems associated with the use of the aforementioned contaminant assessment methods, considerable research on new approaches has been conducted. The success of personal passive monitors or dosimeters, in determining TWA or integrative (i.e., residues are retained despite any reduction in ambient levels) exposure concentrations of organic vapors in occupational environments (Fowler, 1982; ACGIH, 1 990) has contributed to the application of the same principle to dissolved organic contaminants in aquatic environments. Early embodiments of this passive monitoring approach for aquatic environments (Södergren, 1 987; Hassett et al., 1 989) consisted of organic solvent-filled containers or bags, with chemical uptake occurring across polymeric membranes. Although these devices had numerous shortcomings, their use in field studies (Södergren, 1987; Litten et al., 1993) demonstrated that the in situ passive sampling approach had considerable potential. In an effort to optimize the solvent-containing passive sampler design, Zabik (1988) and Huckins (1988) evaluated the organic contaminant permeability and solvent compatibility of several candidate nonporous (i.e., free volume exists largely as transient cavities) polymeric membranes. The membranes included LDPE, polypropylene, polyvinyl chloride, polyacetate, and silicone or silastic. Criteria for membrane evaluation included solvent compatibility and environmental durability, analyte uptake rates, dialytic performance, cost, and convenience. Of the polymers tested, only LDPE and polypropylene were found acceptable.
Based on the aforementioned findings and using a “mimetic chemistry” approach to improve sampler design, scientist at the USGS’s CERC developed the lipid-containing SPMD (Huckins et al., 1 989; Huckins et al., 1 990a). The device is designed to mimic the biouptake of organic contaminants from water alone (bioconcentration process) and provide an integrative estimate of dissolved hydrophobic contaminant concentrations, without the many variables associated with the use of organisms (see “SPMD Homepage” URL on page A-1 1 ). Figure 1 -1 is a picture of a commercially available standard SPMD. Although the device is simple in design, the mechanisms governing its performance are complex.
An SPMD consists of a thin film of triolein sealed in a layflat thin walled tube of nonporous LDPE. The thin film (triolein) layflat design (Huckins et al., 1990a) has the greatest surface-area-to-volume (SA/V) ratio of any in situ sampler configuration, with the exception of hollow fiber bundles and strips of thin LDPE film. On an equivalent-mass basis (e.g., g of whole SPMD versus g of whole body fish) the SA of an SPMD is more than 7-fold larger than the SA of a gill integument of a fish (Hayton and Barron, 1990). The direct dependency of SPMD sampling rates on surface area is shown in “THEORY AND MODELING”, page 3-1 . Triolein or 1,2,3-tri-cis-9-octadecenoyl glycerol used in SPMDs is a major neutral triglyceride found in most organisms. Although fish lipid (Huckins et al., 1990a) and silicone fluids (Petty and Orazio, 1996; Petty et al., 1997) have been successfully used as SPMD liquid phases, triolein has several advantages. Its attributes include the availability as a high purity synthetic product, a low transition temperature from a liquid to a wax (i.e., melting point of 0 o C) permitting use at low temperatures, and a large capacity to solubilize nonpolar organics. Also, a close correlation (Chiou, 1985) exists between the equilibrium triolein-water partition coefficient (K Lw ) and the K ow of hydrophobic organics, and it has a low LDPE permeability, even during dialytic recovery of analytes from SPMDs (Huckins et al., 1 990b; Meadows et al., 1993). In addition, triolein provides a convenient reservoir for permeability or performance reference compounds (PRCs). For more information about PRCs see page 3-31 .