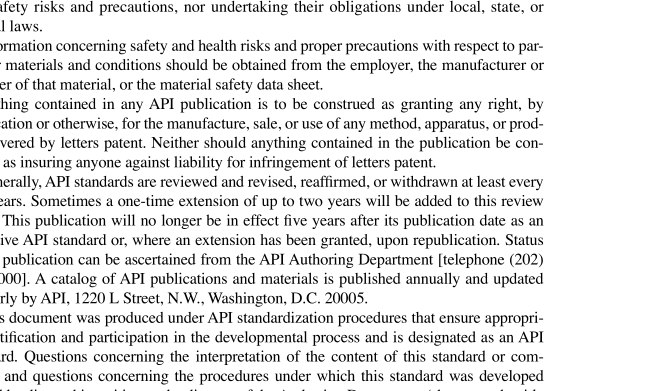 API Publ 2510A-2010 pdf download.Fire-Protection Considerations for the Design and Operation of Liquefied Petroleum Gas (LPG) Storage Facilities.
1.4.4 An examination of the 100 largest hydrocarbon- chemical accidents over a 30-year period has made it possible to estimate the probability of major accidents (losses of $12,000,000 or more in 1983 dollars) in LPG storage facili- ties. 2 This data and the 1984 disaster near Mexico City 3 dem- onstrate that there were about three major incidents worldwide every 10 years involving pressurized liquid light- hydrocarbon storage facilities. The number of such facilities in operation during the 30-year period examined was between 600 and 1000. Hence, the probability that any one facility will have a major LPG accident in any one year is from less than 1 in 2000 to less than 1 in 3333. Since a typical facility is likely to contain several vessels, the frequency of a major accident at any one facility is probably on the order of 1 per 20,000 vessel years. A consideration of the nine major LPG storage facility incidents studied suggests that many if not most of the incidents would probably not have occurred or would have been much less severe if the practices described in this publication had been observed. Hence, implementa- tion of the recommendations described herein should reduce the frequency of major LPG storage facility Þres from 1 per 20,000 vessel years to about 1 per 100,000 vessel years. 1.4.5 Some of the causes for releases that have occurred at facilities that transfer and store pressurized LPG are listed below: a. Leakage from an LPG transfer pump seal. b. Leakage from valve stem seals and ßange gaskets. c. Leakage when taking a sample or drawing water. d. Leakage from transfer piping because of corrosion, mechanical damage, or from screwed piping connections. e. Failure of a transfer pipe ßexible joint or cargo hose at the interface between a Þxed facility and a tank truck, railroad tank car, or tank ship. f. Leakage from a storage vessel because of corrosion. g. Tank overÞlling, which forces liquid out the pressure safety valves.
1.5.3 A smaller storage facility that is remotely located, such as at an oil Þeld producing site, should not require as much built-in Þre protection as a major facility in an indus- trial or urban area. An evaluation should be made to establish the value of the facility, the economic impact if it were lost, and the exposure risk to people and neighboring installations. The level of Þre protection incorporated in the design should be commensurate with the exposure risk and value of the facility, provided that any reductions in Þre protection would not result in unacceptably high risks to people. 1.6 LPG Properties 1.6.1 At normal temperature and atmospheric pressure, LPG is in a gaseous state. It can be liqueÞed under moderate pressure or by cooling to temperatures below its atmospheric pressure boiling point but will readily vaporize upon release to normal atmospheric conditions. It is this property that per- mits LPG to be transported and stored in a liquid form but used in the vapor form. 1.6.2 LiqueÞed petroleum gas consists of light hydrocar- bons with a vapor pressure exceeding 40 pounds per square inch absolute at 100 ° F. Examples include propane, propy- lene, butane (normal or isobutane), and butylene (including isomers). The most common LPGÕs are propane and normal butane or a mixture of these, and thus only the properties of these gases will be discussed. The properties of propane and normal butane are shown in Tables 1 and 2. 1.6.3 Concentrated LPG vapors are heavier than air; thus they tend to stay close to the ground, collect in low spots, and disperse less readily than lighter-than-air gases. Undiluted propane vapor is 1 1 Ú 2 times more dense than air, and normal butane vapor is twice as dense. However, once LPG is released, it mixes with air to form a ßammable mixture, and the density of the mixture becomes essentially the same as air.