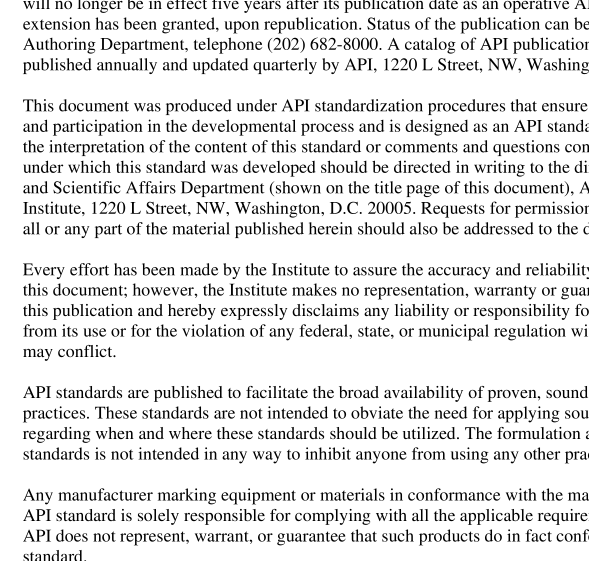 API Publ 2387-2009 pdf download.Survey of Occupational Injuries, Illnesses, and Fatalities in the Petroleum Industry Summary Report: Aggregate Data Only.
API has published information provided by companies on fatal accidents in the petroleum industry since 1933. Companies are asked to describe each incident that occurred within company operations. In 2008, ten companies reported experiencing twenty-seven fatalities. One of those companies submitted detailed information about the circumstances surrounding five of these fatalities. This brief narrative is intended to provide information that could be used to avoid the occurrence of similar accidents in the future. U.S. OPERATIONS: COMPANY EMPLOYEES Refining January 14, 2008 – Employee was fatally injured at Ultracracker Unit. U.S. OPERATIONS: CONTRACT WORKERS Refining October 9, 2008 – Contractor working for an environmental services company on land farm was injured by a backhoe. NON-U.S. OPERATIONS: COMPANY EMPLOYEES Marketing – Not Separated December 6, 2008 – Bulk vehicle driver died when struck by on-coming vehicle after leaving cab of his vehicle. NON-U.S. OPERATIONS: CONTRACT WORKERS Expl. & Prod. & Drilling May 24, 2008 – Worker fell from height. Marketing – Not Separated October 15, 2008 – Contract driver died when truck veered off road and rolled causing cab to be extensively damaged.
Generally, API standards are reviewed and revised, reaffirmed, or withdrawn at least every five years. Sometimes a one-time extension of up or two years will be added to this review cycle. This publication will no longer be in effect five years after its publication date as an operative API standard or, where an extension has been granted, upon republication. Status of the publication can be ascertained from the API Authoring Department, telephone (202) 682-8000. A catalog of API publications and materials is published annually and updated quarterly by API, 1220 L Street, NW, Washington, D.C. 20005. This document was produced under API standardization procedures that ensure appropriate notification and participation in the developmental process and is designed as an API standard. Questions concerning the interpretation of the content of this standard or comments and questions concerning the procedures under which this standard was developed should be directed in writing to the director of the Regulatory and Scientific Affairs Department (shown on the title page of this document), American Petroleum Institute, 1220 L Street, NW, Washington, D.C. 20005. Requests for permission to reproduce or translate all or any part of the material published herein should also be addressed to the director. Every effort has been made by the Institute to assure the accuracy and reliability of the data contained in this document; however, the Institute makes no representation, warranty or guarantee in connection with this publication and hereby expressly disclaims any liability or responsibility for loss or damage resulting from its use or for the violation of any federal, state, or municipal regulation with which this publication may conflict. API standards are published to facilitate the broad availability of proven, sound engineering and operating practices. These standards are not intended to obviate the need for applying sound engineering judgment regarding when and where these standards should be utilized.
API has been collecting data regarding workplace injuries, illnesses and fatalities in The Survey on Occupational Injuries, Illnesses and Fatalities (OII) since 1931. Prior to the 1999 survey, companies submitted employee data for their U.S. operations only. In 2000, API expanded the scope of the OII and began collecting employee and contract worker data for operations both inside and outside of the U.S. A second change introduced in 2000 gave participants the ability to submit their data electronically over the Internet using The Occupational Injuries, Illnesses and Fatalities Reporting System at http://oii.api.org/. Features of this online database include automatic data checks, online instructions, and reports. In addition, for companies willing to share their data have the ability to produce customized benchmarking reports. While conducting the 2001 survey, API learned that a number of companies no longer track certain data. Consequently, it was decided to make those data fields optional in the 2002 survey. These optional data fields are “The Average Number of Employees”, “Job Transfer or Restriction”, “All Injury Cases” and “All Illness Cases”. The Occupational Injuries, Illnesses, and Fatalities Reporting System generates two broad categories of online reports for each type of worker—Full Benchmarking and Limited Benchmarking. Companies submitting data for both required and optional fields as well as giving API permission to share their data with other participants have access to Full Benchmark reports. Companies that only submit data for required fields only have access to Limited Benchmarking reports.