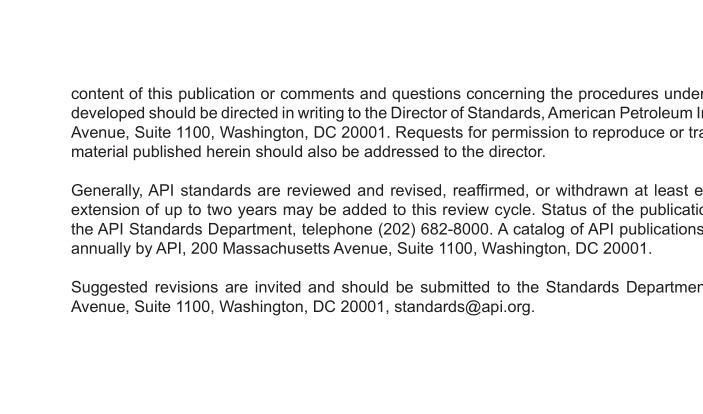 API MPMS 6.1A-2021 pdf download.Manual of Petroleum Measurement Standards Chapter 6.1A.
1 Scope This standard is part of a set of documents that detail the minimum requirements for metering systems in single phase liquid applications; API MPMS Chapter 6.1A is common to all sections of API MPMS Chapter 6 and specifes the common requirements for system criteria. In the event of a confict between this and API MPMS Chapter 6 sections that are not in the 6.XA series, API MPMS Chapter 6.1A shall take precedence. 2 Normative References The following referenced documents are indispensable for the application of this document. For dated references, only the edition cited applies. For undated references, the latest edition of the referenced document (including any amendments) applies. API MPMS Chapter 4 (all sections), Proving Systems API MPMS Chapter 5 (all sections), Metering API MPMS Chapter 6 (all sections), Metering Assemblies API MPMS Chapter 7 (all sections), Temperature Determination API MPMS Chapter 8 (all sections), Sampling API MPMS Chapter 9 (all sections), Density Determination API MPMS Chapter 9.4, Continuous Density Measurement Under Dynamic (Flowing) Conditions API MPMS Chapter 10 (all sections), Sediment and Water Determination API MPMS Chapter 12 (all sections), Calculation of Petroleum Quantities API MPMS Chapter 21.2, Electronic Liquid Volume Measurement Using Positive Displacement and Turbine Meters GPA 2177, 1 Analysis of Natural Gas Liquid Mixtures containing Nitrogen and Carbon Dioxide by Gas Chromatography GPA 2174, Obtaining Liquid Hydrocarbons Samples for Analysis by Gas Chromatography GPA 2186, Method for the Extended Analysis of Hydrocarbon Liquid Mixtures Containing Nitrogen and Carbon Dioxide by Temperature Programmed Gas Chromatography
3? Terms? and? Defnitions For the purposes of this document, the following terms and defnitions apply. Terms of more general use can be found in the API MPMS Chapter 1 Online Terms and Defnitions Database. 3.1 batch A discrete shipment of commodity defned by a specifed quantity, time interval, or quality. 3.2 correction for pressure on liquid CPL Compensates for the efect of pressure on a liquid. 3.3 correction for temperature on liquid CTL Compensates for the efect of temperature on a liquid. 3.4 equilibrium vapor pressure The pressure at which a liquid and its vapor are in equilibrium at a given temperature. 3.5 gross volume GV The actual volume of fuids at fowing temperature and pressure. 3.6 gross standard volume GSV The gross volume (GV) or gross observed volume (GOV) corrected to base temperature and pressure conditions. 3.7 indicated volume IV The transferred quantity, in indicated (uncorrected) volume units, at operating conditions, that occurs between opening and closing gauges on a tank, during a meter proving with each run, or that occurs from start to stop of a receipt or delivery being measured by a fow meter. 3.8 liquefed? petroleum? gas LPG A fuid that is predominantly propane, butane, propylene, or butylene, either separately or in mixtures, with limited amounts of other hydrocarbons and inert gases, that is maintained in a liquid state under pressure and/or at reduced temperature. 3.9 meter factor MF A factor used to correct the indicated volume (IV) of the meter at operating conditions to the gross volume (GV) of the meter at operating conditions.
3.11 net standard volume NSV The gross standard volume corrected to exclude non-merchantable components such as sediment and water (S&W). 3.12 resistance temperature detector RTD A temperature-responsive device consisting of one or more sensing platinum resistors within a protective sheath, internal connecting wires, and external terminals to permit connection of electrical measurement instruments. 3.13 sediment and water S&W Material that coexists with, yet is foreign to, a petroleum liquid. S&W can include dissolved water, free water, and sediment, as well as emulsifed water and entrained or suspended sediment and water. 4 Units of Measure 4.1 General Metering systems can use diferent types of units of measure. The International System of Units (SI) and U.S. Customary (USC) units are commonly used within the petroleum industry. Whichever units of measure are used, all calculations of quantities are defned by the appropriate sections of API MPMS Chapter 11 [1] and API MPMS Chapter 12. Note in particular that API MPMS Ch. 11.5 [1] details criteria for the calculation of quantities and qualities requiring unit conversions. 4.2 Base Conditions Since volumes change with diferences in temperature and pressure, common reference conditions are defned for custody transfer volumes. These reference conditions may be at standard temperature and pressure (standard conditions), base conditions defned by contract or regulation such as standard temperature and liquid equilibrium vapor pressure, or some other defned reference conditions. For fuids whose vapor pressure at the reference temperature is greater than atmospheric, the reference pressure shall be the equilibrium vapor pressure. See API MPMS Ch. 11.2.2 [1] .