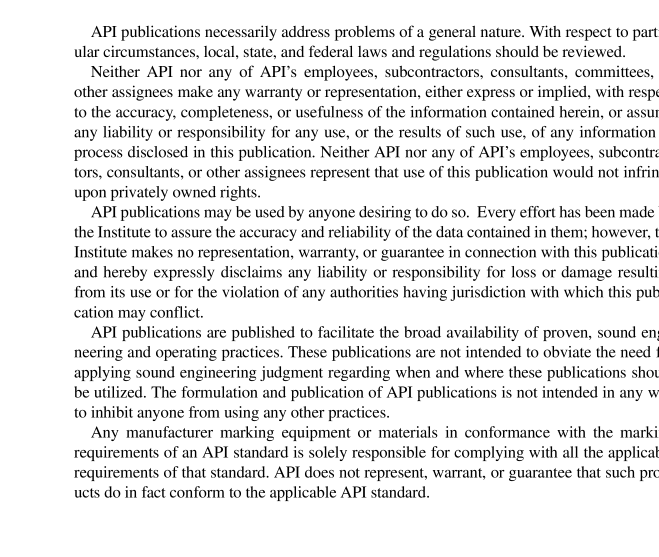 API MPMS 5.2-2010 pdf download.Manual of Petroleum Measurement Standards Chapter 5—Metering Section 2—Measurement of Liquid Hydrocarbons by Displacement Meters.
5.2.1 Introduction API MPMS Chapter 5.2, together with the general consid- erations for measurement by meters found in API MPMS Chapter 5.1, describes methods for obtaining accurate quan- tity measurement with displacement meters in liquid hydro- carbon service. A displacement meter is a volume measuring device which separates a flowing liquid stream into discrete volumes and counts the separated volumes. The meter carries through its measuring element a theoretical swept volume of liquid, plus the slippage for each stroke, revolution, or cycle of the mov- ing parts. The indicated volume of the displacement meter must be compared with a known volume that has been deter- mined by proving, as discussed in MPMS Chapter 4. It is recognized that meters other than the types described in this chapter are used to meter liquid hydrocarbons. This publication does not endorse or advocate the preferential use of displacement meters, nor does it intend to restrict the development of other types of meters. 5.2.2 Scope This section of API MPMS Chapter 5 covers the unique performance characteristics of displacement meters in liquid hydrocarbon service 5.2.3 Field of Application The field of application of this section is all segments of the petroleum industry in which dynamic measurement of liq- uid hydrocarbons is required. This section does not apply to the measurement of two-phase fluids.
5.2.5 Meter Performance Meter performance is defined by how well a metering sys- tem produces, or can be made to produce, accurate measure- ments. See 5.1 for additional details. 5.2.5.1 METER READOUT ADJUSTMENT METHODS Either of two methods of meter readout adjustment may be used, depending on the meter’s intended application and anticipated operating conditions. 5.2.5.1.1 Direct Volume Readout Method With the first method the readout is adjusted until the change in meter reading during a proving equals or nearly equals the volume measured in the prover. It is then sealed to provide security against unauthorized adjustment. Adjusted meters are most frequently used on retail delivery trucks and on truck and rail-car loading racks, where it is desirable to have a direct quantity readout without having to apply mathematical corrections. An adjusted or direct-reading meter is correct only for the liquid and flow conditions at which it was proved. 5.2.5.1.2 Meter Factor Method With the second method of meter readout adjustment, the meter readout is not adjusted, and a meter factor is calculated. The meter factor is a number obtained by dividing the actual volume of liquid passed through the meter during proving by the volume indicated by the meter. For subsequent metering operations, the actual throughput or measured volume is determined by multiplying the volume indicated by the meter by the meter factor (see Chapter 4 and Chapter 12.2).
5.2.5.2.2 Viscosity Changes The meter factor of a displacement meter is affected by changes in viscosity which results in variable “slippage”. Slippage is a term used to describe the small flow rate through the meter clearances which bypasses the measuring chamber. The meter factor accounts for the rate of slippage only if the slippage rate is constant. Viscosity may vary as a result of changes in the liquids to be measured or as a result of changes in temperature that occur without any change in the liquid. It is therefore important to take into account the parameters that have changed before a meter factor is selected from a plot of meter factor versus viscosity. It is preferable to reprove the meter if the liquid changes or if a significant viscosity change occurs. 5.2.5.2.3 Temperature Changes In addition to affecting the viscosity of the liquid, changes in the temperature of the liquid have other important effects on meter performance, as reflected in the meter factor. For example, the volume displaced by a cycle of movements of the measuring chambers is affected by temperature. The mechanical clearances of the displacement meter may also be affected by temperature. Higher temperatures may partially vaporize the liquid, causing two-phase flow, which will severely impair measurement performance. Either an automatic temperature compensator, or a calcu- lated temperature correction based on the volume weighted average temperature of the delivery, may be used to correct indicated volume to a volume at a base or reference tempera- ture.