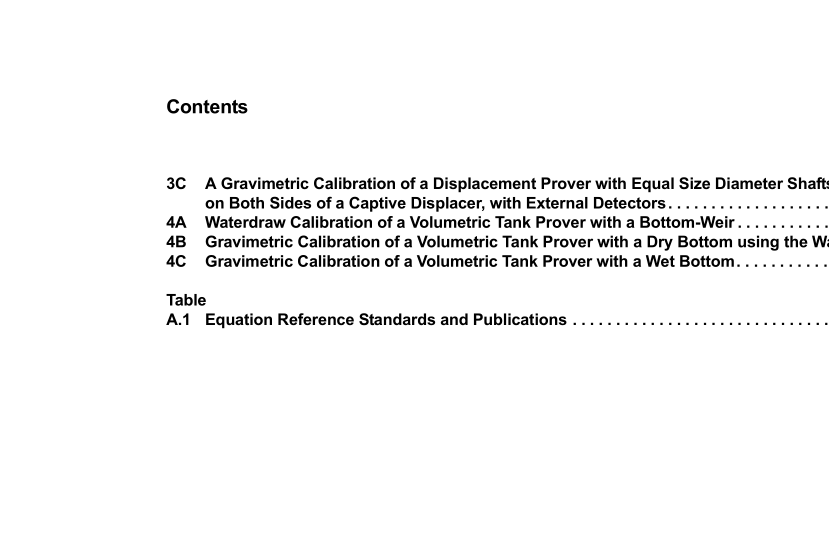 API MPMS 4.9.4 2010 pdf download.Manual of Petroleum Measurement Standards Chapter 4—Proving Systems Section 9—Methods of Calibration for Displacement and Volumetric Tank Provers Part 4—Determination of the Volume of Displacement and Tank Provers by the Gravimetric Method of Calibration.
3 Terms and Definitions For the purposes of this document, the following definitions apply. The publications in Section 2 may be referenced for additional definitions relating to the calibration of displacement and tank provers. 3.1 aggregate mass Each certified weight has a nominal value of mass along with an “as left mass” value from it’s certificate. The nominal value of mass and the “as left mass” of the weight must be summed to determine the aggregate mass of the weight. 3.2 as left mass The actual value of mass that a weight differs from the nominal value of mass of that weight. Example a 50 kg weight (nominal value) may have an as left mass of 0.001 kg. The aggregate mass of the weight would be 50.001 kg. 3.3 calibration water The actual water used in the calibration process. The water used cannot be nontreated water defined in 3.8. 3.4 container A collection tank that fits on a weigh scale (balance, load cell, weighing device, etc.) and contains either all or part of the fluid from the prover during calibration for weighing. 3.5 direct traceability Documentation demonstrating that the standard in question (weight, pressure gauge, thermometer) was tested by a National Metrology Institute. 3.6 expected mass The estimated mass to be weighed from the volume dispensed by the prover. EXAMPLE For a prover with a nominal volume of 20 gal, the expected (estimated) mass of water would be 75.659 kg.
3.7 indirect traceability Documentation demonstrating that the standard in question (weight, pressure gauge, thermometer) was tested by a laboratory with direct traceability to a National Metrology Institute and in compliance with that institute’s quality assurance program. 3.8 nontreated water Water that does not meet the potable or reference water definitions. Nontreated water is not used for gravimetric calibrations. 3.9 potable water Water from an approved public municipal system that meets the EPA secondary contaminate levels for a maximum total dissolved solids of 500 mg/L (1000 μS). 3.10 reference water Water from a distilled, deionized or reverse osmosis source with a maximum conductivity of 50 microsiemens (μS). 3.11 tare A term meaning to perform the action to zero the weigh scale. An electronic weigh scale may indicate a mass reading with no mass applied. The weigh scale would then be tared (zeroed) before a weighing. A tare can normally be performed with a significant amount of mass on the weigh scale. The reason to tare with a mass applied would be to obtain a net change in mass. 3.12 target mass (weight) The predetermined aggregate mass of test weight(s) needed for verification of the weigh scale. The target mass must be within ±20 % of the total mass. 3.13 total mass The combined mass of the water to be weighed and the mass of the container. The mass of water to be weighed can be a partial, or the whole prover volume. 4 Prover Preparation The guidelines or requirements for the preparation of provers for the GM are identical to those found in API MPMS Ch. 4.9.1 and API MPMS Ch. 4.9.2. 5 Preliminary and General Calibration Procedures 5.1 General The preliminary and general calibration procedures for provers utilizing the GM are identical to those methods found in API MPMS Ch. 4.9.2 except for those procedures described in this section.
The mass obtained shall then be divided by the density of the water at the prover conditions of temperature and pressure to obtain the volume of water displaced. Corrections for temperature and pressure of the prover metal shall then be applied to this volume to determine the volume of the prover at reference conditions for any given calibration run. The prover base volume is the average of a set of runs that meet the repeatability criteria. Because of environmental conditions in the field (wind, rain, snow, etc.) that may affect the weight measurement, the GM is more suitable for calibrations carried out in controlled environments. 5.2.2 Calibration Records All the involved parties should review the calibration certificate from the previous prover calibration together with all the past maintenance records and calibration history of the prover that is available. Confirm that the identifying numbers on all the calibrated equipment (weights, thermometers, weigh scales, pressure gauges, etc.) to be used in the calibration correspond to their respective up-to-date traceability certificates.