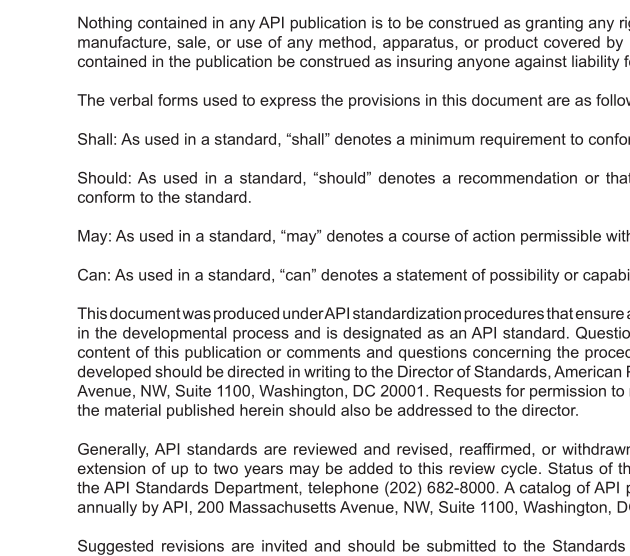 API MPMS 4.8-2021 pdf download.Manual of Petroleum Measurement Standards Chapter 4.8.
1 Scope This guide provides information for operating meter provers on single-phase liquid hydrocarbons. It is intended for use as a reference manual for operating proving systems. The requirements of this chapter are based on customary practices for single-phase liquids. This standard is primarily written for hydrocarbons, but much of the information in this chapter may be applicable to other liquids. Specifc requirements for other liquids should be agreeable to the parties involved. 2 Normative References The following referenced documents are indispensable for the application of this document. For dated references, only the edition cited applies. For undated references, the latest edition of the referenced document (including any amendments) applies. API MPMS Chapter 4.2, Displacement Provers API MPMS Chapter 4.4, Tank Provers API MPMS Chapter 4.5, Master-Meter Provers API MPMS Chapter 5.1, General Considerations for Measurement by Meters API MPMS Chapter 5.6, Measurement of Liquid Hydrocarbons by Coriolis Meters API MPMS Chapter 12.2, Calculation of Petroleum Quantities Using Dynamic Measurement Methods and Volumetric Correction Factors 3? Terms? and? Defnitions There are no defnitions unique to this document. Terms of more general use may be found in the API MPMS Chapter 1—Online Terms and Defnitions Database. 4 Basic Principles The object of proving meters with a prover is to provide a number with a defned discrimination level, which can be used to convert the meter indication to an accurate quantity of fuid passed through the meter. Refer to API MPMS Ch. 12.2 for volume discrimination levels and calculations or API MPMS Ch. 5.6 for mass discrimination levels and calculations.
6 Frequency of Meter Proving The frequency required for proving varies from several times a day to twice a year or even longer depending upon the reasons listed in Section 5. Other reasons are: a) value of the liquid, b) cost/beneft to prove, c) meter proving history, d) meter system stability, e) variations of operating systems. The actual proving frequency is dependent upon the contract or procedures established by the operator of the metering system. This standard does not defne proving frequency of meters. In general, the proving frequency for a new system starts with short intervals and may be extended to longer intervals as confdence increases in the system. The operator should specify the interval of time or a quantity of throughput, after which the meter should be proved again. In a situation where custody transfer accuracy is not required, and where viscosity and temperature do not vary too widely, it may be sufcient for meters to be re-proved at specifed intervals, such as every month or two when the metering system is new, extending to once in six or perhaps 12 months when the reliability of the meter system has been established.
7.3 Temperature and Pressure Measurements 7.3.1 General Accurate temperature and pressure measurements are necessary for all types of proving, except direct mass proving. Proving systems with automated (computerized) recording of the required meter and prover data reduces proving uncertainty as compared with manual measurements. These two operating conditions should be stabilized (in equilibrium) for best proving results. Stability of these conditions during the proving reduces meter factor uncertainty. 7.3.2 Location Prover temperature and pressure measurement shall be taken at locations as described in API MPMS Ch. 4.2, API MPMS Ch. 4.4, and API MPMS Ch. 4.5 as applicable. Meter temperature and pressure measurement shall be taken at locations as described in API MPMS Ch. 5.1 as applicable. 7.3.3 Accuracy Temperature and pressure values shall be within the ranges of the appropriate volume correction equations/ tables (API, GPA). Thermometers or temperature transducers used for proving shall be the highest practical resolution as recommended in API MPMS Ch. 7 [10] . Pressure gauges or pressure transducers shall be selected with a resolution that enables the recording of pressure values as required in API MPMS Ch. 12.2.